When I was a junior in college I fell in love with Shakespeare. I was determined to become the next Kenneth Branagh--in large part because I wanted to bed his then wife, Emma Thompson. Love of literature can be based on worse things.

Anyway, after classes ended that year I auditioned for, and was cast in, a local Renaissance Faire's production of Romeo and Juliet. I was ecstatic...until our first rehearsal. A central Pennsylvania Renaissance Faire wasn't exactly the Royal Shakespeare Company, but that I could work with. More problematic was how the production had been cut down to half an hour, and Juliet spoke in a cadence that can best be described as "mall-rat." Emma Thompson, she was not. And, 'struth, I was no Branagh.

When not performing as Romeo, I roamed the shire and interacted with the visitors, some of whom dressed in really uncomfortable looking clothing. It was the first time I'd met historical reenactors. No matter what kind of weather--and Pennsylvania summers do, indeed, have all kinds of weather--they'd show up in chain mail, armor or long Elizabethan dresses. Sometimes, amazingly, all three.

This boggled my mind. I was getting paid $150 a week to walk around in a doublet and hose, but these folks were voluntarily subjecting themselves to the rigors of antique fashion. What, I wondered, attracted them to this time period so much that they wanted to inhabit it? Why would anyone choose to bake themselves under sheet metal?

Hold that thought, and fast-forward 20 years. From that start at the Faire, acting had taken me first to New York, then Los Angeles...and I still wasn't Kenneth Branagh. For an East Coast guy who grew up in an 18th-century log cabin--next to Amish, for goodness' sake--LA was a very foreign place. For the first time in my life I felt detached--detached from my family, detached from my traditional upbringing, detached from history. I found myself thinking of those people at the Faire.

One day in the summer of 2009, I attended what's called a "reenactment timeline" at Fort MacArthur, a former Army installation twenty-five miles south of LA. I spent the day walking around a steep hillside asking reenactors the kinds of questions people who don't know anything about history ask: "Why did people wear wigs?" "When did Vikings live?" and "Come on, was smallpox really all that bad?" I chatted with a barber surgeon, watched a World War II skirmish and even pleaded with some Romans to let me chuck one of their javelins into the Revolutionary War encampment. (They told me to get lost.) But I found it all to be very exciting. As a reenactor, I thought, I could learn about history by living it.

While there, I noted the absence of one particular group, so a few days later I typed "Nazi reenactment" into Google. Actually, I only made it as far as "Nazi ree," when the predictive search yielded three results: "nazi reenactment," "nazi reenactors" and "nazi reenactment uniforms." So yes: people do reenact them and they have no qualms about sharing their hobby with the world.

I fired off an email to the contact of an upcoming event. "Drive on Stalingrad" sounded like an utterly miserable experience. "Everything from processing PW's to night combat in collective farms make this an event not to be missed!" the website stated.

"Stalingrad" didn't take place in Russia, it took place in the plains of Colorado (a stand-in for the steppes) and sought to replicate the German advance of early September, 1942. More than a million died in the battle, which is now remembered as the turning point of the war's European theatre. It goes without saying that it was a strange way to spend one's weekend.

Jean Paul Sartre, who was a prisoner during the war, may have famously said "Hell is other people," but he'd clearly never hung out with Nazi reenactors in sub-freezing ranchland, otherwise I'm certain he would have revised it to read, "Hell is Nazi reenacting." After only nine hours in "Stalingrad," I went A.W.O.L.

And yet the experience made me even more curious than ever about history--and the hobby. After regaining most of the feeling in my limbs, I thought back on my visit to Fort MacArthur. The day commenced with a parade of "soldiers" filing by in chronological order: Romans, Celts, Vikings and so on. As the memories washed over me like an expired canister of mustard gas, I pictured myself embedding with each group to learn not only about the past 2,000 years of Western civilization, but about the people themselves.

And so that's what I did.

Charlie Schroeder is the author of the book, Man of War: My Adventures in the World of Historical Reenactment.

Why I Reenacted 2,000 Years of History (PHOTOS)
Historical Reenactments 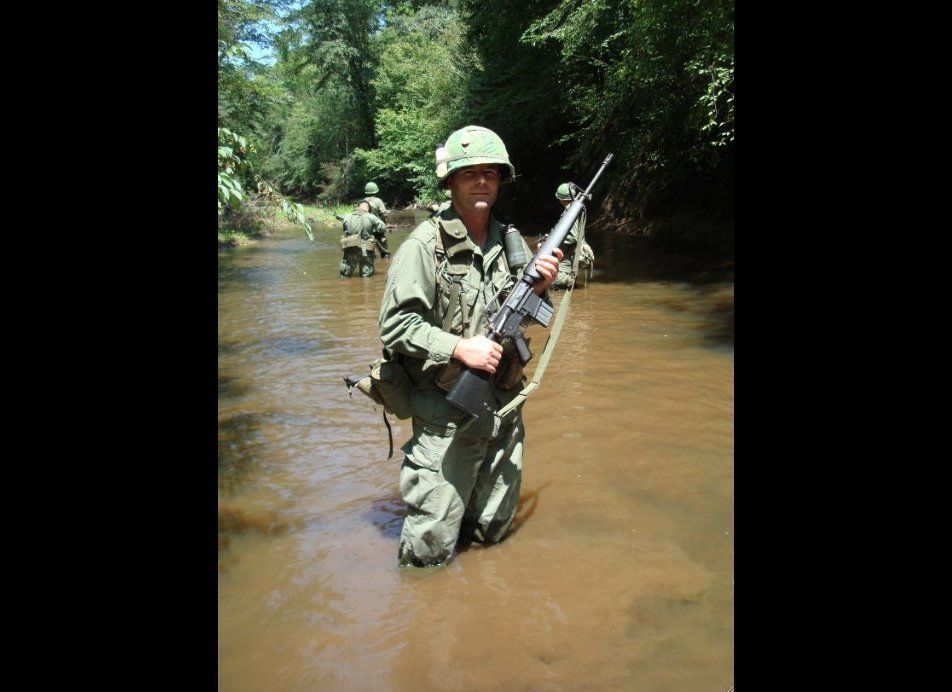