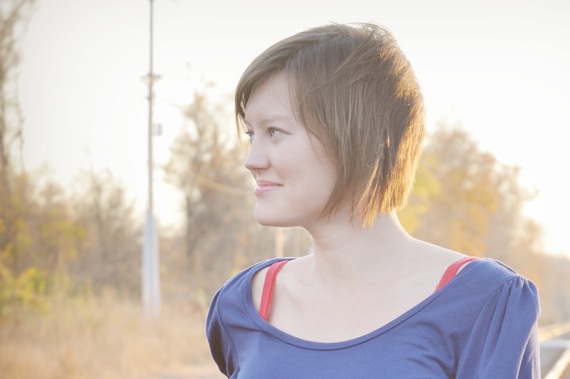 Let's get one thing out of the way. My life is dictated by numbers.

I've had Type 1 diabetes, an autoimmune disease, for nine years now. Since the day I was diagnosed, it was drilled into me that numbers matter. They do not just matter, but they predict how long (or short) my life will be. They will govern how I'm treated by my medical team. They will determine how I feel about myself: my successes and my failures.

I see more numbers than an accountant. Between my CGM (continuous glucose monitor), a device that tells me what my blood sugar is at all times, my glucose meter (a device I use to calibrate my CGM), and my insulin pump, the device that delivers life-sustaining insulin to me around-the-clock, I have numbers coming out of my ears. I have averages, percentages, calculations.

And let me tell you, I hate numbers. I remember being in the third grade and bawling every night for weeks as my mom tried to coach me through long division homework. I just couldn't understand it. Then there was middle school, when somehow I qualified for an advanced math class only to fail it miserably, my tests and worksheets covered in bloody-red ink: angry circles, jagged slashing lines, and percentages indicating an undesired letter grade. When I got to high school, I dodged math classes and instead signed up for some of the most dreaded courses: World History, Speech 4, and French. Anything to not have to learn how mixing letters and numbers made any sort of sense, memorize the different types of triangles, or make sense out of a $100 graphing calculator.

I've never been great at anything mathematical or scientific. I can't tell you which way is west. I don't know how to use a compass, understand barometric pressure (or pretty much anything the weather person talks about besides the temperature), or read the most basic graph. The stock market? Forget it.

My aversion to numbers had me desperately fearing I was going to kill myself when my first diabetes nurse educator pulled out syringes, vials of insulin, and a glucose meter and revealed to me that I (moi?) would be in charge of keeping myself alive by, get this, understanding numbers. Gulp.

Nine years later, I've managed to make it. Technology has helped tremendously, doing many of the calculations for me. But all the newest inventions and advances in math and science haven't been able to tame my lack of mathematical confidence.

First, when you are diabetic, the numbers don't lie. You stab your finger with a lancet, touch the drop of blood to a test strip, and wait five seconds for a meter to light up and boldly display a number. This number reveals if my blood sugar is too high, too low, or just right. But the thing is, that number can change in a second. Diabetes is a tricky beast. Diabetics know that a number is an indicator of victory or devastation, inching toward a good day or season or inching toward some of the various complications many diabetics face: loss of vision or limbs, kidney failure, certain cancers, depression, sexual dysfunction, heart issues, and many more. Sugar in the blood is like shards of broken glass; it damages anything it comes into contact with, like all of a person's organs and nerves.

Second, when you are diabetic, numbers dictate how others perceive you. High blood sugars mean that one's blood sugar is "out of control," and you are bound to get a good talking to by your doctor. Many don't get that controlling one's blood sugar is about as easy as controlling a kid in a candy store. Numbers that are too low put a person at risk of passing out, which is obviously dangerous, particularly if the person is driving, working, or caring for children. Diabetics are judged harshly. "Should you eat that?" is heard when you choose a sliver of pumpkin pie at the family Thanksgiving celebration or at a company dinner.

Finally, when you are diabetic, numbers push us to judge ourselves unfairly. Knowing how risky a high or low blood sugar is puts immense pressure on a diabetic to be perfect, even though perfection isn't possible. The numbers, all of them that we see every day, translate into a person's level of self-esteem and self-awareness. It's nearly impossible to avoid. Type 1 diabetes is all-consuming. It is a prison with a life-sentence.

As someone who is still called "young lady" by elderly and middle-aged folks, I am surrounded by peers both in person and on social media who are obsessed with their bodies. Status updates boast of pounds or inches lost. Many sell for companies that offer products that claim to "block fat" and increase energy levels by some percentage I don't understand (and guess aren't at all scientifically factual). There's interval training and CrossFit and hot yoga. There are the "look how many miles I jogged this morning" status updates. It seems my generation's culture is saturated and obsessed with fitness trends and triumphs and a whole lot of ab and chest selfies.

Unlike many of my peers, I don't see the scale as something that determines my worth as a person, as someone who is more of success or failure because I dropped two pounds or gained five. I have enough numbers on my proverbial plate. More than enough. And I frankly do not need one more fighting for my mental energy, time, or attention.

As I diabetic, I'm just trying to take life one day at a time. I'm trying to maintain a healthy balance between living and changing. I'm trying to battle a demon that has no plans to leave, and because of that, I do not have room in my life for another number. And I am unwilling to go back to the feelings I had learning long division or glancing at another failed math test. I'm older, I'm wiser, and I'm much more confident.