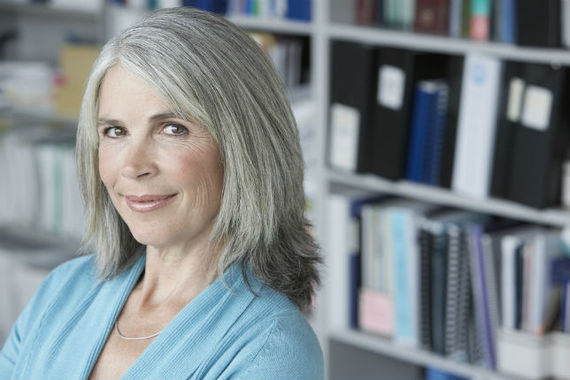 I am a 46-year-old woman. Like many middle aged women of my generation – the first to be raised with a nearly unlimited buffet of life options – I’m not ashamed of being 46. I don’t lie about my age. I don’t pretend I’m younger. And I don’t try to hide it.

One of the ways I don’t hide is by not coloring my hair. I never have, and neither did my mother. She was an excellent hair role model in more ways than one, since her black hair was only partially grey when she died at 55. To be fair, I inherited excellent DNA from her and my dad who, at age 71, has only a small bald spot nestled among his thick head of hair that’s not yet entirely grey. While I do take good care of my tresses, I enjoy hair privilege by having been bestowed by genetics with thick, naturally auburn waves. Such hair privilege enables me to get away more easily with sporting a growing thatch of “wisdom highlights” sprouting from my top of my scalp, but this unearned privilege only takes the edge off my subversive attitude.

My attitude is this: age is nothing to be ashamed of, and therefore grey hair is nothing to be ashamed of. Covering my greys with toxic chemicals would not only be hazardous to my precious health, it would be voting with my dollars for an industry that profits mightily from making women feel insecure and ashamed of our bodies starting in childhood. Covering my greys would be saying “yes” to the notion that I, as a woman, am only valuable or attractive if I look “young.” It would be saying yes to the idea that age, and its physical signs, are something to be feared, denied and hidden – that I need to pretend to be something other than I am to be deemed worthy. It would mean I agree with the belief that a woman’s only power stems from her being “sexy” in public.

I didn’t come to my no-color decision lightly. I used to pluck out my greys, but stopped on my 35 birthday since baldness isn’t one of my goals. My intent has long been to age gracefully, but the recent accelerated pace of that process (thanks, perimenopause!) has created doubt. Not only am I single and looking, I have a profession that puts my face in media, on stage, and in front of well-paying clients. I never realized how much my physical appearance has likely contributed to my professional appeal. I never realized until I suddenly found myself in the middle of my lifespan that the second half of my career will happen amidst a steady loss of physical attractiveness – a quality I’ve taken for granted and unknowingly leveraged to offset the harmful impact of sexism.

Another challenge is the rarely-stated belief that to be a woman and look “professional” is to not look “old,” meaning grey. I encountered this belief when I got professional headshots done last fall. I have them redone every 5 years for the same reasons I rock my greys, and because I believe in truth in advertising. Like some female celebrities, I told the photographer to not make me look 30, and I told the studio to not eliminate wrinkles and greys in the finishing. The fact that they took them out anyway – and I found myself in the weird position of telling a service provider twice to not artificially “enhance” my image – was more humiliating than if I’d had to request retouching. Their actions communicated that not only is my natural state inherently flawed, so was my expressed wish to remain in that natural state.

It’s time to build on the past and redefine aging and womanhood again. Baby Boomer women were the first to shatter social barriers, achievement expectations, sports records and glass ceilings. Today, they defy the “old” label and are redefining what it means to be older (some are even rocking long grey hair) – but while eschewing the label. It’s time for Generation X women to take the next step and flaunt not only the signs of aging but wear the label of “old” and “older” with shameless pride.

Some say the best way to change society is to infiltrate existing social structures by complying with their norms, then bust them open from the inside. I say that tactic invites complacency and assimilation more often than evolution. Change comes perhaps more quickly by conforming just enough to avoid triggering shock and revulsion, while pushing boundaries just enough to shift what’s viewed as normal and acceptable. I got my first tattoo in 1992 when no young college-educated, middle class woman who wasn’t part of a biker gang or illicit drug culture was getting inked. I got my nose pierced when I was 42 and it was against dress code. Meanwhile I was wearing business suits, delivering results at work, paying my bills and otherwise acting like a “respectable” adult. I don’t take credit for singlehandedly shifting U.S. culture (around body modification), but it’s thousands of small acts like mine that do.

The same goes for grey hair. Women won’t shift shaming, toxic, oppressive notions about how we’re supposed to look and act by playing along. We must stop participating and voting with our dollars for practices that promote the idea that our natural state – at any life phase – is wrong.

I don’t know what my next phase holds. Things change and so do we. My own hair-role-model mother admitted that if she got pregnant late in life she’d dye her hair in a second. But for now, I’m a 46-year-old woman, I’m going grey, and I will not apologize for either. Neither is shameful, and therefore I will not hide.