For TueNight.com by Margit Detweiler 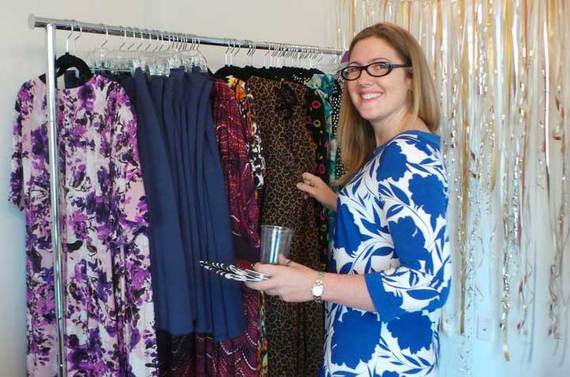 "I'd size down, for sure -- it runs big," says Mara, a Gwynnie Bee staffer. She sits behind a makeshift checkout table eyeing me as I hold up a sheer, floral-patterned top. "We're about the same size I think?"

The two-year-old company (three if you count the years Hunsicker spent conceiving it) is like Netflix for clothing; your "closet" is akin to your "queue." You choose a one-10-piece-out-at-a-time plan and closet the clothes you like. (Yes, in the GB community parlance, "closet" is used as a verb.) When you're done wearing an item, you toss it back in a USPS, pre-postage-paid blue bag they provide (no washing necessary) and they'll ship you your next item. They launder everything meticulously and retire clothing when it's even slightly worn, so if you don't mind sharing clothes with strangers, you're good.

Actress Ashlie Atkinson (Rescue Me, Bored to Death and the forthcoming Us & Them), whom I met at the last GB event, shared a tip with me:

"I tend to accumulate things wherever I go," says Atkinson. "So in order to have cute things to wear on trips and extra room for souvenirs, I always pack as many Gwynnie Bee items and blue mailer bags as I can."

Before she returns home she just uses the prepaid mail bags to return the worn clothes. "Voila! More room in the suitcase!"

At the risk of sounding like an ad, I've been a member for the last year or so, so I'll vouch for being 100 percent biased. I freaking love it. As a woman who wears plus-sized clothes, it's always a struggle (or at the very least, time-consuming) to find clothing that looks good, for a good price that has any sense of style. Friends say, "I got such a deal at Uniqlo!" or "Have you been to Joe Fresh?" -- seemingly oblivious to the fact that those stores carry no higher than a 14 (and a skinny 14 at that). Shopping is often a carefully strategized, often stressful trip to a department store's dowdy collection or an expensive and time-consuming online perusal.

Enter Gwynnie Bee, the monthly clothing subscription service that stocks sizes 10-34 and curates a collection of trendy mid-market finds. You can choose from designers like DKNY, Three Dots and IGIGI to pricier Anna Scholz and Kiyonna to Canadian vintage-look designer Cherry Velvet. The prices aren't cheap (e.g. you can have three garments out at a time for $79 a month), but comparatively you can move more pieces of clothing through your wardrobe than the cost of one dress.

As a fan of GB, I wanted to chat with the 36-year-old Hunsicker -- turns out she's a fellow Pennsylvanian girl -- and find out more about the brain behind the brand.

A Princeton grad, Hunsicker started her career in tech start-ups. (Gotham Gal has a great write-up on Hunsicker's background, pre GB). Ambitious and hungry for experience, she worked her way to the top at advertising company Right Media, until Yahoo acquired them in 2007 for $850 million dollars. She describes a "quick turnaround project" at Drop.io, which was acquired by Facebook after only five months. Ready for her own project, she soon turned her attention to something more hive-minded.

Speaking from experience, having a service that's solely dedicated to the plus-size market is pretty special. I always have to break it to straight-sized pals that this isn't for them. What made you decide to focus on this market?

The choices for plus are horrible. Plus-size women are three times more likely to shop online, not by choice, frankly, but because there are very few brick and mortar options -- and they're pretty crappy experiences. When you look at the statistics, and realize how much of the population actually fits in size 10 and above, and that it's the overwhelming majority of the population? It doesn't make any sense. Everyone else is focused everywhere else. We can really make an impact.

There have been a couple of other ah-ha moments. When you're putting on 10-15 lbs and your clothes don't fit the way they did before but you really don't want to go out and buy anything, because you're not accepting the extra weight? It's convenient to move up and down in sizes seamlessly but it's also a self-esteem thing. If it looks good because it fits properly, I feel better about myself.

You've been able to build a strong community of members and supporters for your site it seems. The comments in the ratings section of the site are sometimes hilariously insightful -- they don't hold back.

We really look at our members as an extension of our product group. We're pretty good at letting our members be totally transparent with us. You can tell us we screwed up shipping. You can tell us you don't like our styles. You can tell us we've let you down because you haven't had the color green three launches in a row. And you can post it publicly. What you can't do is say anything bad about another member. A lot of our staff are members and we hired some of our members to come in and do customer service because they were so enthusiastic about stuff it carried us forward.

What appealed to you about the sharing economy model?

Two reasons -- one that's emotional and another that's utilitarian. On the utilitarian front, you can't buy all the things you want. Even if you could, it's wasteful. It's just so much cheaper to have a much bigger wardrobe and share it among other people. Essentially you're raising the utilization of the core good in the economy; each person can pay a sliver in order to get the same kind of value out of it. I like the efficiency.

From an emotional standpoint, the fact that you can wear so many more clothes in so many different prints and take more risks? It makes clothing so much more fun.

When you think about whether you're going to buy something, there's a pretty high consideration barrier. Does it fit perfectly? Can I afford it? Does it go with other things that I have? What does this piece of clothing say about me? How many more months can I wear it before the season turns over. Are people going to recognize over and over again? With our model all you have to do is say, "Do I like it enough to try it?" And that to me is such an easier question to answer.

You certainly have the business plan nailed down. And you never got an MBA?

No, I did a bunch of start-ups instead. In my opinion you can get an MBA in a classroom, which is usually valuable from a networking standpoint, or you can get one on the job. If you're willing to take a ton of risk, you can join a three-person startup that may totally fall on its face -- you can get an MBA that way too. I remember calling home to my parents after I quit my first job. I was a strategic financial analyst -- a very steady job but very stressful in its own way. My mom and dad understood that career path. When I told them I was joining a start-up, they were like "what are you doing? You're taking a 50 percent cut in salary!" They couldn't understand the risk element. I was like it's ok, I'll eat ramen noodles and Campbell's soup -- it's fine. It was such a foreign concept to them. Every week they'd call and ask how the company was doing and I'd say, "It's failing, it's failing spectacularly." You can learn a lot that way and have the scars to show for it. That was my approach.

When we first met, you told me about how an ever-changing closet of clothing was kind of in your DNA?

My aunt was a seamstress and she would make outfits for her daughter and me. My cousin and I would swap and trade clothing -- this went on essentially until I went to college. We never wore anything twice. We would then take our clothes to a consignment shop and sell it, get money to buy more material at Jo-Ann's fabrics and my aunt would make us something new. So I grew up around patterns and sewing and experimentation with clothing. I never knew my size because my aunt would just buy patterns and tweak them for me. Everything always fit so I never had that experience of going in and trying on clothes that weren't going to work for me. They weren't fancy clothes, but I was very very spoiled. When I left for college and I suddenly had to start buying clothes, I hated it. Nothing fit!

You're not plus-sized yourself are you?

I'm a big weight fluctuator. I've been in sizes 16 and 18 before. I'm happy to be where I am now, but I have no illusions that it's a permanent thing. My best friend is plus-size and I know how hard it is for her to find clothing. I still actually can't convince her to become a member. She's still in this, "I don't want any clothes" kind of mindset. I don't think women need to feel bad about themselves -- and that's what we're trying to change. We want to promote a very body positive culture.

And the name Gwynnie Bee -- where did that come from?

Not a great story around that. I wanted to do a children's book series. The main character was named Gwynstance. I was a strong-willed seven-year old.

Read more of Margit Detweiler's "MidgeMadge" column on TueNight. You can find her on Twitter @Margit.

About TueNight:
TueNight is a weekly online publication for women to share where they've been and explore where they want to go next. We are you, part two. www.tuenight.com