In the five years I spent as a history, health and ethics teacher in Chicago and Miami, my students confided in me a lot. They told me about boyfriend betrayal and broken hearts, unfair parents and annoying siblings.

I always listened. And I always did my best to empathize.

I didn't feel it was necessary to pass them off to another school professional who was already overwhelmed with schedule changes, truancy reports and standardized test coordination. I could be present for them as both a teacher and person, as a trusted adult and a cohabitant of the world.

So I leaned in and let it fly. I shared my own personal stories of being bullied in high school and also the times when I bullied other kids. I told them that I was also a hopeless romantic and prone to having my heart broken and breaking the hearts of others. I let them know that I, too, struggled with believing that I was a good person worthy of love.

But then they kept sharing. 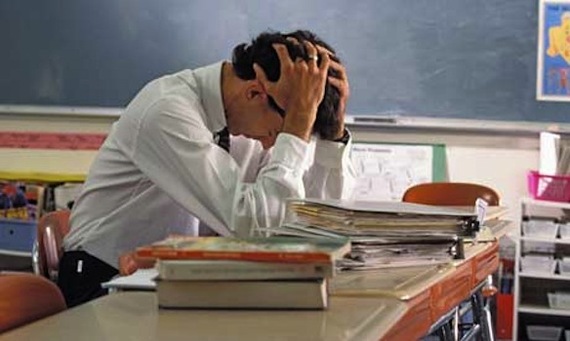 Stories of domestic violence, of gang affiliation, of criminal activity, of eating disorders, of incest, of depression, of suicidal thoughts, of drug problems.

Vanessa, whose mother had essentially abandoned her because of a gambling addiction, was being physically abused by a classmate. Greg moved half way across the country in order to get away from the gang life that led to him being stabbed multiple times. James had fallen into a life of selling drugs, a fact almost proudly broadcasted by his forearm tattoo reading "Trap Star." Victoria had been molested by her father, though her mother refused to believe her. Kristie received tons of positive attention when she started losing weight but felt ashamed because she knew her bulimia was making her unhealthier than ever. Annie had been sexually abused by an uncle when she was little and was freaking out because he had returned to live with the family. Sheri cut herself to relieve her pain. Chris discovered Xanax mixed with booze to numb his. Mary contemplated suicide to assuage hers.

And that's when I stopped sharing back.

Instead, I withdrew, retracted, walled off, and referred them as a professional to another type of professional.

It was cleaner that way, I consoled myself. It was safer. There was Danny Meyer -- fearful and hurting and insecure -- and there was Mr. Meyer -- confident and ambitious and stable. And blurring the boundaries between those two identities would only cause problems -- for them, of course, but especially for me.

After all, it's difficult to live in the unincorporated territory between worlds. It's distressing. It's isolating. It's really fucking scary -- especially for a person who is supposed to be in a position of authority, whose livelihood depends on residing snugly within those electrified borderlines of reverence, appropriateness and respectability.

But my experience as a teacher taught me that students hungered most, outside of stability and consistency, for authenticity. They didn't want a teacher who abandoned who he was when he crossed the threshold of the classroom. They were most receptive to me as a teacher when they better understood me as a person. They were more committed to my classes, invested in course topics and dedicated to learning when they trusted me as a person, as opposed to simply fearing me as an instructor. And though I was always careful never to uncomfortably overshare about my personal life or exploit my students for therapy, I also wanted to model for them that it was okay to admit they had problems, okay to express their pain, okay to be human. And I needed them to see that I was willing to be human right alongside them.

But I never had the courage to let them in on my struggles with drinking and how I came to be sober. There is still too much stigma, still too much misinterpretation and misunderstanding. The terrain of public recovery is still much too treacherous to navigate without getting mired in a shit-ton of muck.

Even now, over four years removed from the classroom, most of my former students still don't know that I'm sober, let alone that I had any drinking problem in the first place. The students with whom I've remained closest -- some now teachers themselves -- have been incredibly encouraging. For the former students who have found out through brief testimonials I've posted on Facebook and various social media outlets (I only accept requests once they've graduated), there has been an outpouring of love and support through email, text and private messages.

In most cases, my students have been shocked by the duality of it all -- the gap between the classroom Mr. Meyer they knew and loved and the Danny Meyer privately hell-bent on self-destruction. In some cases, telling my story publicly has given them permission not to suffer so privately, and they have shared their own stories of struggle with substances since high school. In a few cases, the happiness I have gained as a result of my sobriety has even inspired them to get help and get sober themselves. Two that I know of are now involved in AA and NA and one is in and out of sobriety but always talking about it.

Currently an executive director, overseeing the educations of thousands of students worldwide, I have more to lose than ever by being so open about my struggles. I could get fired. I could have my credibility questioned. I could have my reputation destroyed. Yet I also feel more emboldened to tell my story as publicly as possible because it's difficult not to think how many more lives I could have shaped for the better -- much earlier and much more often -- if I had shared my story with students when they were 16 instead of 24.

Maybe if I was more open with my students years ago -- if I hadn't been paralyzed by the fear of being judged or misunderstood -- I wouldn't have to answer the phone now to hear them crying about their friend who died at 22, killed at the wheel after drinking too much and going racing. Or wouldn't have to hear from a classmate of a former student how that once bright-eyed, fun-loving, anti-drug young person now alternates between getting high on coke and getting evened out through the smoke.

Maybe if I had dared to cross the line and let them in on my problems with drinking, I wouldn't be receiving messages from former students talking about robotripping to numb the pain of an overactive mind or sipping on sizzurp to forget about a broken heart. Or wouldn't be spending my time trying to figure out how Corrlinks (penitentiary email system) works so I can correspond with a student now in prison for possession of Molly.

Chances are it wouldn't have made much of a difference. Most of us aren't smart enough to learn from our own mistakes, let alone wise enough to learn from the mistakes of others. I know I wasn't. It is delusional to think that a decision to share my individual story could have singlehandedly counteracted the pandemic of substance problems that proliferates in a society that favors stigmatization, marginalization and criminalization as its go-to intervention techniques.

Addiction proliferates behind walls. It feeds off the delusion of our separateness. We suffer in silence and too often recover in a shroud of secrecy. Although I would never judge any teacher who is unwilling to sacrifice anonymity in order to tell their story of recovery, I also think it's necessary to be honest with ourselves about what keeps us from sharing more often. I think we'd be pleasantly surprised to see how much our students would gain when we stop obsessing so much about what we might lose.

There are some lines that should never be crossed in the classroom. They are drawn for the safety of students and need to be reinforced.

But there are other lines drawn for less sacred reasons -- for comfort, appeasement, politics -- and many more drawn for the worst reason of all: because they've just always been drawn that way.

Those are the lines that beg to be crossed.

Danny Meyer is 26 months sober and is currently obsessed with Barbara Ehrenreich books, RadioLab podcasts and spoonfuls of peanut butter before bed. He is the CEO and founder of Under A Tree Leadership Academy and passionate about e-learning, social justice education and youth leadership development. Danny received his master's degree from the Harvard University Graduate School of Education and lives with his wife, Alexis, and their ridiculous dog, Boss, in Brooklyn, NY. You can follow him at www.danielmmeyer.com.