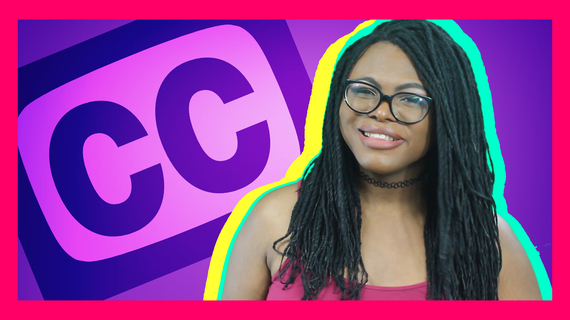 Even though I've been a YouTuber since 2005, the past year was the first time I really distinctly decided to take it seriously; and boy was that a whirlwind. Something I wasn't used to dealing with was an audience with expectations, and even further more, responsibilities. I uploaded videos because I wanted to and people enjoyed hearing what I had to say, but as my following grew, I learned that there were many people who couldn't hear me.

I remember getting called out once on Tumblr for not captioning my videos and I didn't really respond to it too well. Keep in mind, unlike a major television program or a company, I am just me. My videos usually take a lot of research, energy and time. I'd say most of my videos that aren't True Tea take me about 24 hours of editing and that's not including of all of the time that I spend filming, researching, fact checking and writing scripts. To be frank, it's exhausting and I don't have the benefit of having a large production company to do all of this for me. I do it all myself. I couldn't fathom sifting through every one of my thousands of videos and typing every word I said, verbatim. It just sounded like an extra task on top of an already stressful process. So, I was offended that people were insinuating that I didn't do enough while I'm fatigued over the amount of work I put into my videos.

Then, like most times I get called out and don't respond well to it, I backed away from the situation and started to listen. This was when I was introduced to Rikki Poynter, a deaf Youtuber who had been urging YouTubers to caption their videos for quite some time. Seeing her videos really helped me understand and shocked me into recognizing that I was completely overlooking so many people.

For some odd reason, I had never really considered the fact that there were people who were deaf that watched YouTube videos. It sounds insensitive, but it was just something I just hadn't considered. I never really understood what those "Closed Captioning Provided by" interstitials meant. I just thought they were some fun little piece of cartoon or daytime TV that came on between commercials.  I guess to some degree I understood that they were used by people who were deaf, but it didn't really click with me until I was asked to provide them for my own content. I haven't known anyone that was Deaf or Hard of Hearing so, while looking back, it was blatantly obvious that captions were a necessity rather than luxury, the demand for captions felt like asking for too much. In reality, however, there was this large group of people who simply needed captions to be able to process the audio/visual content.

As a growing YouTuber, I've had so many people refer to me as a "Media Influencer". As I gain popularity, I realize the true weight of this term. My social media pages are a part of millions of people's daily use of the Internet. With that comes capital,  and Online Video is becoming far more lucrative than Broadcast Television. In the past year we saw websites like Netflix, Hulu and Amazon gain success with their own programming. While those are large companies with years of experience, YouTube is still a Wild West of sorts. Anyone, like myself with a camera or video software can upload a video, monetize that video and in some cases, go viral. People are more concerned with having the videos simply uploaded, than they are with accessibility to these videos. Many of these viral videos don't have captions. They become part of Pop Culture and wherever you go on-line, you're likely to see some reference to them. Our culture has shifted to the point where viral Vines and YouTube videos are more popular and commonly known than sketch comedy routines on Broadcast TV. I remember going to school and everyone joking about some line from the TV show MadTV. We all had to stay up late to watch what, at the time, felt like edgy comedy we weren't supposed to watch. Now we can watch funny and entertaining videos whenever we want, even from our mobile devices. We're also a much more global culture than we used to be. Access to International media is at our fingertips in a way it really wasn't before. So the need for captions and translations of these captions are becoming increasingly necessary in a world that gets it's News from it's Twitter and Facebook Feeds.

As a single person, I didn't initially understand the need for captions on my YouTube channel. Then I realized that if I was going to be publishing media, that I had a responsibility to make it as accessible as I possibly could. That all being said, I'm still a singular person. Sometimes videos are topical and need to go out fast and I don't have time to caption. However, I'm at the point where I feel like captions are a requirement on my channel so I've started to ask my audience for help. I was honestly overwhelmed by the amount of people who wanted to help me transcribe my videos. I had so many offers that I had to turn people away. So many people wanted to help me make my channel more accessible and I had, the vast majority of my videos captioned by people who volunteered, wanted nothing in return. They loved my work, and just wanted to give back. I couldn't believe how amazing the YouTube community was. I had a much smaller channel at the time, but I still had so many people who were more than pleased to help me get captions on my videos.

Then this happened recently: 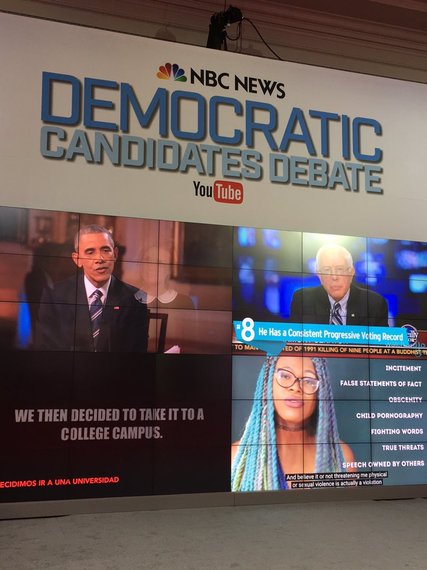 That's a photo of my video being played in YouTube's Democratic Debate room. What do you spy on the bottom of my video? Captions. First of all, I'm freaking out that I was in YouTube's Democratic debate room, but it's so amazing that when I was there, I was captioned. So even if my video was muted, the people in the room still knew what was being said. Dating application, Glide released a video appealing to YouTube creators, asking them to caption their videos.

Surprisingly, quite a few popular creators on YouTube don't caption their videos. The most popular Youtuber, PewDiePie has 41,000,000 subscribers, but doesn't have captions on his videos, Markiplier with 11,000,000 subscribers doesn't caption his videos and Shane Dawson with 6,000,000 subscribers doesn't caption his either. The most popular channels on YouTube don't have captions and if people were asking for me to caption mine, I can only imagine the massive demand to captions theirs. If you're a YouTube creator, there are so many reasons why you should caption your videos, but think mostly about all of the people who aren't watching your content because it isn't accessible to them. What I realized when people called me out and I stopped being defensive and started listening, is that these people were fans of my work. They followed me on Tumblr, Twitter or Facebook where they could read what I said, but couldn't appreciate the amount of time and dedication i put into my videos on YouTube because they felt alienated by them. I realized that I had so many followers who were Deaf, Hard of Hearing or didn't have English as their first language. They wanted to watch my videos, but just couldn't.

While as YouTubers, most of us don't have large companies behind us, but we do have the support of our followers. With the new YouTube Community Submitted Captions feature, they can submit captions and translations to our channel. This makes it so much easier for more creators to have captions on their videos. Since releasing my video about this feature this morning, several of my videos are now available to people who are not only deaf or hard of hearing, but also to people who speak Spanish, German, French, Portuguese and even Polish! I was overwhelmed by the amount of support and love I got when I announced this feature on my page. I know when more Youtubers enable this feature on their channels, we can really changed this platform for the better. You can check out my video about this new feature below. Let's make YouTube more welcoming to everyone!