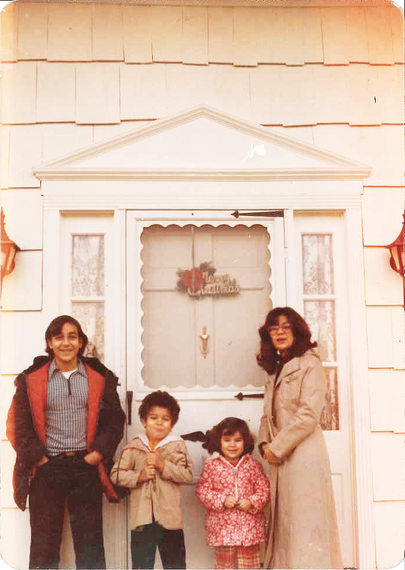 When I was four, the pronunciation of my last name suddenly changed. We went from the "Sol-EHR" family in Harlem, the place where I grew up and went to church, to the "SO-ler" family in Westchester County, the place where my parents moved us to in search of a better life.

Both were me, but the accents were in two completely different places. One sounded foreign while the other sounded like home.

My parents never told me why our name changed, and honestly, I never questioned it. Now as an adult, I wonder why I didn't ask.

With kids of my own now, I see how much influence I have on their lives. Both my husband and I encourage our girls to confidently comment or question life (that includes what we as parents do.) I'm positive that if I pronounced my married name (our family name) incorrectly, they'd probably publicly correct me or at the very least they'd ask me why I pronounced it wrong -- and I like that about them!

I was raised a bit more traditionally. I knew there were times to speak and times to hold my tongue. I don't recall a single instance where I questioned either one of my parents on the way things were. They just... were.

I went with the flow and took the "road of less resistance." From a very young age, I mispronounced my name. This went on for years. That's why after I married my gringo, I hesitated taking his name. It wasn't because I didn't want to, but rather because I felt I needed to reclaim my maiden name. Hyphenating seemed more like a nuisance. So what was I to do?

I had other concerns too. I was afraid that if I let the Sol-EHR name be replaced with my married name, then somehow, I was letting my Latina-ness slip away again -- this time by my own accord. However obscure sounding that is, it was mine and I didn't want to let it go.

Perhaps because I spent my whole young life mispronouncing it, I felt like I owed it to myself and my Latina identity to honor it by keeping my name and more than anything, pronouncing it properly.

And so, my name is Denise Soler (Sol-EHR) Cox. I liken it now to the melody of a song. The name my parents chose for me has resonance, meaning and connection. It's my very own Latina theme song.

Dating back to the 70s, many chose to change their melodies in the spirit of making it "easier" for others to pronounce their name or in response to racial intolerance (or the fear of it). My parents were no different. They introduced that new melody, all in the name of assimilation.

Of course this was not discussed; it just was. I'm not sure how, but on some level, I understood what was happening and why they were so deliberate about changing (our) song. I realized just how much I'd embraced the American Soler melody when I visited my family in Puerto Rico and they told me I sounded too "Americana."

At 22, I moved to Miami to re-root me in my song. In Miami, Soler is a common Cuban name and mispronouncing it isn't tolerated. I mispronounced it once and was quickly corrected by the receptionist on the other line.

I never made that mistaken again.

For starters, I recognized and accepted that I had let my melody fade away. Starting with my name and other identity compromises along the way, I had let go of everything that made me the Latina that I am today.

This was not okay and I refused to allow it to continue.

By reclaiming the pronunciation of my name, I was indirectly and directly reclaiming my culture.

That day in Miami, I got an earful on that call. That receptionist schooled me in my theme song. She scolded me for changing the melody and charged me with the responsibility of holding onto my culture. That day was the turning point of the rest of my life.

Ultimately, I decided to honor Soler (Sol-EHR) by making it my legal middle name and making Cox, my husband's name, my official last name.

So let me be that receptionist for you. Next time you pronounce something with a more "American accent" ask yourself, "Is it worth making something easier for the dominant culture, if it changes the melody for one person, two people or an entire group? Is it acceptable to have Carlos become Charles or Juan become John?

Most importantly, "How does that impact your melody and ultimately who you are?"