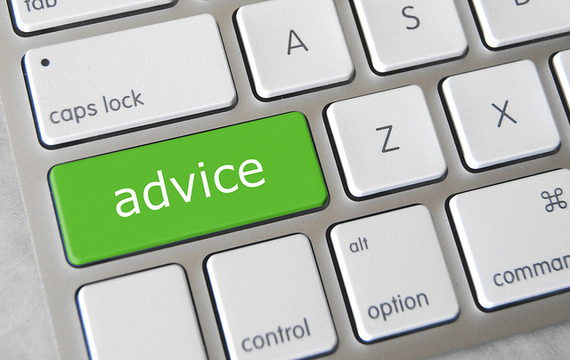 We've all been there: You're going through a difficulty in your life and you reach out to friends and loved ones for help and support. Instead, you receive a barrage of advice that leaves you feeling worse than before, because maybe you've already exhausted all those options, maybe you can't afford those suggestions, maybe the prompts are inappropriate for your situation, or maybe you're an atheist and handing your troubles over to God isn't a solution.

We've also been there: Someone you care about is having hardships and you desperately want to help. So, you offer what you feel is useful advice that will assist the person in getting through it. You pat yourself on the back for being such a good and caring friend, but eventually get annoyed or frustrated when you feel the person hasn't taken your advice or wasn't helped by it. Can't they see how simple it is to improve their situation? Why aren't they listening?!

That's the tricky thing about unsolicited advice: as the giver it may feel helpful, but it's rarely what the person suffering needs. In the end everyone feels worse for wear.

August 2011 to August 2013 went down in my personal history as one of the spectacularly worst times of my life: two unexpected international relocations, job losses, and then a forced repatriation to the US to an unfamiliar and uninviting area. As to be expected when life gives you lemon after spoiled lemon and the lemonade tastes disgusting, I sunk into a deep depression. My attempts to find a part-time job were thwarted by mechanized application systems, volunteer opportunities fell flat, and due to a lack of public transportation and I was housebound to a half-mile radius aside from the days my husband had off. Those months were in my top three lowest times ever.

Since I had no other outlets and no in-person community, I'd turn to social media to vent my frustration with my environment and the impotence I felt at not being able to rebuild something fabulous from all the lemon rinds remaining of my decade of experiences in Europe.

Even though it was hard for people to understand what I was going through -- the kind of isolation I was in was rather unusual -- I did have a few empathetic friends who commiserated and offered their shoulders for many, many tears.

At the same time I had a lot of people writing me to give me (unsolicited) advice, often regarding avenues I'd already explored and found to be dead ends over and over again. During the course of those miserable 24 months, I even had "friends" drop out of my life because they felt I refused to take their advice on things they thought had the power to turn my life around even though from my perspective their advice wouldn't have.

I began to notice that people's first reaction upon hearing of someone's difficulties is to try and help fix them. A most noble intention, indeed, but in certain contexts becomes a patronizing approach to someone else's hard times.

I stopped using social media except in the direst of situations because all the unnecessary and unsolicited advice that poured in made me feel even worse. Don't these people know I've already done that? Tried that? Been denied that? Don't have access to that? Don't have money for that? They made me feel as if I was choosing to suffering, when I wasn't.

And that was the problem: People didn't really understand my on-the-ground situation. Ultimately, the only ones who gained from all that unsolicited advice were they who gave it, because they could congratulate themselves and think they'd done something helpful. They hadn't. The opposite.

I came to realize that advice was the last thing I needed. What I craved was for people to simply accept and acknowledge that I was stuck between a rock and a hard place. All I really wanted was empathy and some company until the tide turned to ferry me out.

I also started to see how even the most banal of conversations were driven by people taking turns trying to fix others' perceived or misperceived problems without acknowledging the truth of that person's current experience: good, bad, or whatever in between.

After my moment of clarity I cringed because I, too, surely have hurt someone's feelings in the past by giving them advice when they'd not asked for it. And the sad depth of that realization made me feel ill. And guilty.

The road to hell is paved with good intentions, and unsolicited advice is the mortar.

I made a decision to stop giving advice unless specifically asked for it. I quit, cold turkey.

In the beginning it was SO HARD. My first instinct is to be helpful, and offer solutions. But from my own recent experience, I had learned that just because I might think it's helpful doesn't mean it will be, especially if the person isn't even asking for advice and likely only needs what I did: a simple and heartfelt commiseration that what they're going through is horrible.

I bit my tongue so often my food tasted of blood, but I stuck by my No Unsolicited Advice resolution.

I found myself incredibly present in my conversations and interactions with others in a way I'd never been before. I was liberated from my self-imposed responsibility to help people who aren't asking for assistance. I could just sit back, listen, empathize, and be there. Instead of the "You should do this..." or "You need to do that..." reflex I'd say, "I'm here for you, with whatever you need," and, "How I can help?"

In turn, when I asked people for advice, I listened in a way that I hadn't been doing before because now I actually wanted that information, it wasn't being hoisted on me against my will.

I hadn't realized what a heavy and totally unnecessary burden advice-giving had been for much of my adult life.

Who am I to tell someone what they should do or what they need? When did it become my job to fix other people's problems? Why would I assume I know the solution to someone else's hard times?

What a relief to let go of that cumbersome crutch of advice-giving and get down to the business of being an active and supportive friend, finding out what they need from me, not saddling them with what I think they need.

Yet, every so often -- in spite of my best mindfulness efforts -- I'll relapse into the default mode that manifests as the illusion of helping. I'll acknowledge the error, apologize, and crawl right back onto the non-advice wagon with my tail between my legs, vowing better for next time.

Advice is only useful in one case and one case alone: when a person asks for it.