In the last year, a new tradition has sprung up in my house. Every Wednesday night, an hour or so before bedtime, my five-year-old son will yell, "Modern Family! Blackish!" so loud it echoes. And with that, my husband and I snuggle up with him on the couch, and together, get lost in characters and stories.

While my son is laughing at a physical gag, he's also absorbing the messages when Modern Family's Claire struggles to be the perfect mother (having the perfect snacks for her kids, juggling all the errands, and more) as she enters her new role as president of the family company. (Spoiler alert: It's impossible.) He's also watching when Blackish spends an entire episode on police brutality in the black community.

Much recent pop content contains storylines and messages aligned with progressive values and campaigns: Scandal's surprise abortion scene. The ongoing immigration storyline on Jane the Virgin. Beyonce's "Formation" on stage at the Super Bowl and the Grammy performance of Rapper Kendrick Lamar's "Alright," each inspired by the #blacklivesmatter movement and cultural throwdowns in the fight for racial justice. The Big Short highlighting Wall Street's complicity in our recent economic crisis. The #oscarsowhite hashtag launched by April Reign, which called out the lack of diversity among Academy Award nominees and helped fuel a larger conversation about exclusion in our political democracy.

Bonus! Download our comic guide: Playing with Pop and Politics 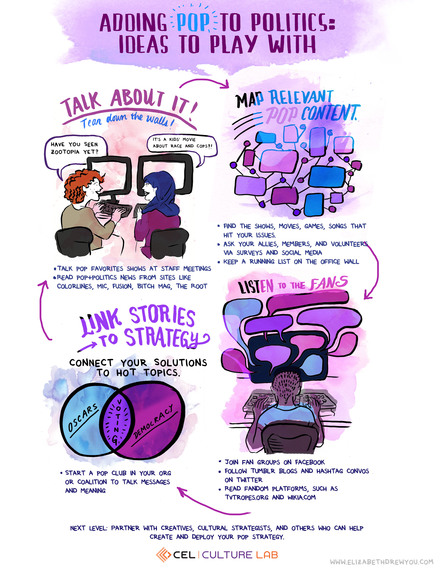 Popular culture both reflects and moves our society. It shapes beliefs and behavior. It is where people are already paying attention. While social movements often hook up with supportive celebrities and political songs, for the non-profit organizations that serve those movements, pop is not yet built in to how they work.

What's popular is already political. But are nonprofits and advocacy groups ready to use it?

Many social change leaders, working on issues such as race and gender justice, economic disparity, and a fair and equal democracy, are seeking ways to connect with pop culture's power. We have a growing field of artists, media makers, strategists, and organizers who are developing content, research, tracking systems, and partnerships to help connect advocacy priorities with creative entertainment.

But what we've discovered in our experiments at the Culture Lab is that even before advocacy groups start using these tools or start working with cultural consultants and entertainment industry partners, they have to change the way they think about popular media.

When people in the social change world learn about my work, the classic question is, "Hey, do you know how I/my organization can reach celebrities? We'd love [insert celebrity name here] to do a PSA video... tweet about us/our campaign... put our policy issue in their next episode... [insert your celebrity to-do here]."

It makes sense that they jump to this idea. The change sector is so tightly attuned to the news cycle that a celebrity endorsement seems like the equivalent of being quoted on the front page of The New York Times. While it's true that a celebrity speaking up about an issue can generate news and discussion, there's much more that pop culture can do.

Pop culture is not just a tactic for grabbing eyeballs--it's a strategy for moving hearts and minds.

Commercial marketers have all sorts of experts and tech designed to help corporations reach audiences by tapping into entertainment endorphins and narrative myths. Reports like Spoiler Alert and Making Waves aim to help social change groups and funders figure out how to invest in long-term culture-shifting work. Accustomed to news monitors, PR firms, and op-ed writers, groups that advocate for progress need new infrastructure to help them succeed in this realm. It's why we've been building and testing the Cultural Pulse, a service that tracks storylines, hot moments, and fan conversations for issue-focused social change groups.

At the same time, we've found that the key (and cheap!) first step for most nonprofits is simply to start talking about pop culture at work--to dig into the characters, stories, fans, and drama that relate to their political projects. Thinking about pop narratives as strategic opportunities is so new for many politicos that they need to break from business as usual.

I now come to meetings with a new set of tips for nonprofits interested in merging pop and social change. Instead of sneak-reading People or Kardashian feeds during a lunch break, advocates can share the buzz in staff meetings. Listening to fan chatter online can be as informative as a public-opinion poll. Themes from shows we watch with our kids can become conversations in planning policy campaigns. Our own guilty pleasures--the frothy, the dramatic, the comedic, the escapist--can help us understand what's speaking to the people we want to reach.