I read the Feminine Mystique when I was a sophomore in high school. As part of a huge class project where we chose a revolutionary figure to "resurrect" for a speech, I became Betty Friedan for 20 minutes of one March day. I sprayed my hair gray, put on a shirt I had bought at a thrift store, held up a girdle I had attached to a stick and I became a woman who used her voice for change.

When my speech was over, the teacher asked me a question. A question he didn't think I'd have the guts to answer. The whole year up until that point I'd sat, quiet, in the middle rows, trying to blend in, never raising my hand.

"How do you feel, Betty, when people accuse you of being too pushy, when they say you don't know your place?"

"I'd assume anyone who calls me that is a male chauvinist pig," I said, rather shocked at myself.

I'm pretty sure that's not what Betty Friedan would have said, but that is, in that moment, what I wanted to say to the male teacher who I had found patronizing all year long. Out of character, I had always been too shy to speak out. That day, my own voice surprised me.

That project? That speech? Reading The Feminine Mystique at 15? It taught me more than anything that I have a voice. That using your voice matters. That people really can make change happen. I'm pretty sure that is why my mother had insisted I choose Friedan for the project. She, like my teacher, knew I'd learn an important lesson.

I took Nora to the Stand With Texas Women rally on the capital steps here in Austin. Before I had children, I probably would have thought that such a place is nowhere for children. Some of you reading may feel that same way.

I unbuckled her carseat straps and we discussed democracy.

"Like if we see something wrong in class we should tell the teacher?"

"Yes. We can't just let things that we think are wrong happen without trying to change it."

On the sunny sidewalk heading to the capital, she clutched my hand, looking overhead at the plane circling the capital, the STAND WITH WENDY banner trailing behind it. We walked into the crowd, the sea of orange, the many women and men who had gathered today on the steps of the Texas capital to defend women's rights in Texas.

In the shadow of the iconic building, on the tree-lined walkway, we stood and listened. We listened to women speak about choices, about healthcare, about democracy.

"She said Democracy," Nora said, perking up at hearing the new word she had learned in the car.

"She did. Remember that's why we're here."

"Explain democracy to me again," she said.

"Well. This is democracy. We are all here today because people in our country have power. We vote for our leaders and then when they make choices we don't support, we can tell them we are unhappy by gathering like this. No one person in our country makes all the decisions."

"So all the people here don't like this law?"

"What is the law about?"

But I didn't go to the capital today to tell her about abortion. And she happily let me ignore her question.

I wasn't there to explain the details of a bill that is too complicated for many adults to understand.

I wasn't even there to tell her that one side of this debate is wrong and one is right, although I certainly have my opinions.

"Who are all of those people lining up in blue?" she asked as we tried to find a spot away from the big orange crowd.

"They are the ones who support this law."

"Where are they going?"

"I think they are going to the other side of the capital. To have their own rally."

"So the blue people can have their side and we can have our side and everyone can just listen to each other?"

"Well. That's the way it should work."

I took Nora to stand with Texas women to show her that she is part of a larger community, that when she sees or hears something that she feels is wrong, she doesn't have to stay silent.

I took Nora to the capital to start planting that seed. To start showing her the power that she has. To let her know that speaking out against wrong is admirable. To let her know that being engaged in our community, in our government, is an essential part of what makes this country strong.

We stood under a live oak tree, sipping our water and listening to Wendy Davis speak. Nora was tired and overwhelmed. I grabbed her hand and stood to head toward the car when I heard Davis say,

A great number of us have felt discouraged about the current state of affairs here. Some of us have felt mad. Today is different though, today we feel hope. We've had an opportunity to be inspired by each other's actions in our democracy. We've witnessed how much we can accomplish when we reclaim our power and require accountability.

And that was exactly it. Exactly why I took Nora into the crowd, why we packed our water bottle and sunscreen and headed out to the capital lawn.

As she pushed herself up into a handstand, one of her coaches looked at the other, pointed to Nora. "She's strong," he said, as if he was surprised.

Today, I took my daughter to the capital to stand with Texas women as a step in making sure that her own strength and her own power are never a surprise to her. 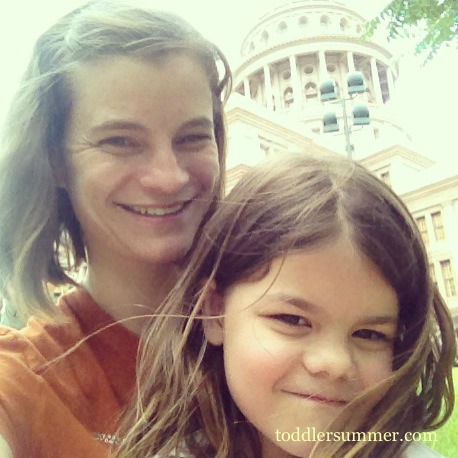