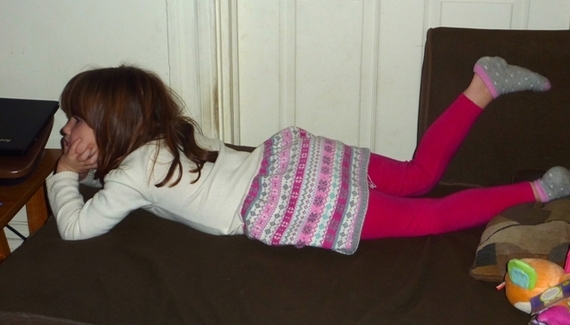 It's the dog days of summer around here. Camp is winding down, but there's still weeks to go before my daughter grabs her backpack and hands over those tissue boxes and Expo markers to her teacher. At this point she knows every scratch on the playground slide by heart. She's seen every episode of Winx Club. Even the feel of sand beneath her toes -- the rush of saltwater against her skin -- has lost its luster.

I feel a momentary pang of guilt. She may have nothing to do, but I work from home and have deadlines set by clients who don't care that August is a sweltering morass of restless children, errands, and the endless taunts of the ice cream truck. I feel a rising panic, a responsibility to entertain this child, to set up playdates, to find her a theater troupe or a basket-weaving club or a curling camp to keep her occupied. I silently second-guess my determination not to allow her to have a tablet or other device that would keep her occupied, transfixed on a (hopefully educational) game on a screen, all thoughts of boredom driven happily from her mind.

And then I stop. I remember my own childhood summers, days stretching mercilessly, wondrously before me. My mother was a homemaker, and twice a week she'd clean the house from top to bottom. I'd watch her remove an endless progression of jewelry boxes, figurines, and picture frames from the dressers, carefully dusting each one before returning it to its designated location. Waiting impatiently, I'd build a fort out of couch cushions and dare my imaginary foe to oppose me. I'd stage a fashion show with my dolls, at least two of whom weren't speaking to each other at the moment. I'd grab my bike and ride to a friend's house, or join some neighborhood kids on an expedition to a nearby creek -- back when kids played outside and no one had a smartphone with which to report them. I'd read a book, or watch TV, or just lie on the kitchen floor and watch my mom dust the final cabinet. "OK," she'd say, smiling. "I'm done. Let's go to the library."

Those were the dark days, before iPads, and Netflix, and the Internet. Time was vast and empty, and part of being a kid was learning to fill that void. Boredom was part of life, as natural as playing double dutch on the corner or eating mom's meatloaf without complaining, if you knew what was good for you.

Looking back, I'm thankful for those boring days of summer.

Knowing how to fill time, to be alone, to rely on my imagination and curiosity -- these skills have served me well as an adult. After college I lived alone in a small New York City apartment. On weekends, when my friends were busy with boyfriends or whatever else, I'd have entire days to myself. I'd lug my laptop down to the Virgin Megastore (when it existed) and work on my never-ending novel. Or hop on a bus and ride all the way downtown, just to see where I ended up. Or listen to music. Or go to Central Park, ostensibly to read, but really to watch the endless parade of people. There were moments of adventure, of inspiration, and, yes, of boredom. And they were wonderful.

Today the concept of letting your child just sit around the house is an uncomfortable one. Somewhere along the way, the idea emerged that every moment of a child's day should be filled or scheduled. And with all the entertainment, devices, and classes at our disposal, they can be. But sometimes I worry for the kids and teens I see glued to their phones, to their video games, to their never-ending sources of stimulation. How will they one day handle the quiet? Will they falter under the long, monotonous hours of a day job? The slow, isolating days of new motherhood? What will they do when social media grows dull, when the screen loses its luster -- and suddenly, it's just them, their thoughts, and an endless stretch of time, waiting to be filled?

And so, I don't rush to relieve my daughter's boredom. But I've noticed something. When I tell her to "go find something to do," after some complaining, she does. The other day she rearranged her entire room, clearing off a bookshelf "to make room for new toys from Santa." The day after that, she made a "welcome book" for a friend who's moving into the neighborhood. Sometimes she collects materials for the fairy costume she plans on constructing for Halloween, or waters the flowers, or plays with other girls in the building. Sometimes she just sits on the couch, mind wandering, eventually returning to the unchanged scene before her.

"Go find something to do," I say. And I smile, because I know she will.