Why would I fly across the country on my own dime knowing I would most likely end up in jail in one of the poorest parts of America?

Well, have you ever heard of MTR?

Don't feel bad, my friends are intelligent, well-read and informed people, but most of them had never heard of MTR (Mountain Top Removal) either. 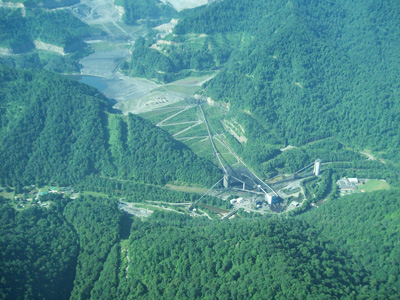 So, I went to Coal River to help bring much needed attention to this hidden, criminal (but somehow legal) form of mining. I was honored to be joining an inspiringly brave group of concerned Americans, which included NASA climate scientist James Hansen who was among the first to sound the alarm on the climate crisis. The sharp, charismatic, 94 year old, former West Virginia U.S. Representative and Secretary of State Ken Hechler, who was the first congressman to introduce a Federal bill to abolish strip mining in 1971. (If passed the bill could have prevented this mess we find ourselves in.) And I was deeply moved to be arrested with those affected by MTR in Kentucky, and the many local residents fighting for their very lives, including a half dozen senior citizens, canes, walkers and all.

Mountain Top Removal is a devastatingly destructive form of mining and has already destroyed 2,000,000 acres in the Appalachian Mountains.

Coal companies have literally blown up over 500 mountain tops to access the coal seams and then dumped the refuse into the valleys below, killing over 3000 miles of headwater streams. The EPA just gave the go ahead for an additional 42 mountaintops to be blown off with another 6 permits pending.

Mountain Top Removal leaves behind a virtual hideous moonscape of devastated earth, billions of gallons of poisonous toxic sludge, and boarded up towns with dramatically high rates of cancer.

Don't get me wrong, I have great respect for, and am deeply indebted to the miners working in coalmines and on MTR projects who risk their lives daily to bring power to our country. I understand they feel threatened by anything that might take away their jobs. And, I don't want to see them lose more jobs, as 75% of mining jobs have already been lost to the machines and explosives of MTR.

While it takes fewer miners to remove coal with Mountain Top Removal, there are just as many dangers, accidents and fatalities! It is a cheaper way for the companies to mine and that's why it's becoming so pervasive.

Yesterday, I received this email from a woman in Virginia:

Thank you so much for coming to West Virginia and trying to save our mountains from Mountain top removal. I am a 9th generation Appalachian and it pains us to see what is happening. If it was not for the Internet I wouldn't have known about your efforts. Massey has quite a bit of influence of the local media in the coalfields. I am sorry you were arrested but I thank you for standing up for what is right. We need to work on sustainable communities here in the mountains so that coal miners will have opportunities for jobs not so dangerous. My brother works, when he can't find anything else, at the mines driving the large dump trucks that haul the coal out of the pits. It's dangerous work even if you are not underground. You just wouldn't believe the equipment they give them to work with. This one site he was in this massive huge dump truck that the floorboard was rusted out with open holes. Rocks would fly back into the cab from the tires. And when it rains, it's a mudslide. One of his co -workers was killed when the dump truck went over an embankment last year. Reporting gets you fired. And yet these workers will defend the job because there is nothing else. So thank you for standing up with us. We do appreciate it. 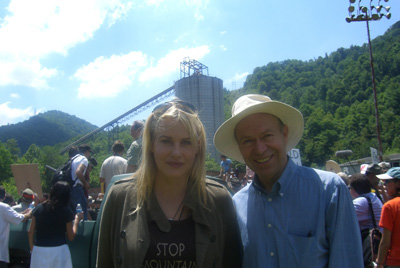 Then there's the sickness...

According to WVU's institute for health policy research, coal county residents are more likely to suffer from chronic heart, lung and kidney diseases, cancers and generally suffer from excess numbers of premature death. There's a high cancer risk for up to 1 out of every 50 Americans living near the more than 100 billion gallons of toxic sludge in the clay-lined and unlined (the majority unlined) coal ash landfills and slurry ponds, such as the TVA Kingston ash sludge landfill that collapsed into the Emory River in December.

Tennessee Valley Authority officials consistently have said the ash spilled in December from the utility's Kingston Fossil Plant wet landfill in Harriman, Tenn., and in January from its Widows Creek pond in Stevenson, Ala., is non-hazardous... but after the spill, regulatory and independent testing have found high levels of toxicity in the spilled waste and raw water where the two spills occurred. Thirty-one of the landfills and slurry ponds in Tennessee, Georgia and Alabama are on or near major waterways!

The slurry pond above the Marsh fork elementary school where we held our protest holds 2.8 billion gallons (it's one of the smallest ponds -- one nearby in brushing fork holds 9 billion gallons) of sludge in unlined pits containing arsenic, lead, cadmium, and mercury.

Tragically but predictably in coal river valley, the children are often sick with headaches and asthma, and among the 200 students and teachers at Marsh Fork elementary school cancer rates are higher than average.

Three teachers have died from cancer and one is struggling with the disease now.

Today I received this from a man in Raleigh County, West Virginia:

West Virginia. It is hell.

Every morning a 6 am my cat starts coughing. My eyes burn, my nose burns (sometimes bleeds), I get ill, and my health continues to fall apart. I got two forms of cancer, I can't drink the water.... My kid is lead poisoned, my wife is- and in a mile radius 10 people have had heart attacks or died from whatever is here. The dust is full of arsenic.... EPA won't come near this place. It is owned by the coal industry. Thousands, who live here and are dying from 100 miles of rivers under coal sludge, Do the earth a favor and check on this and if you feel like improving our life send us a ticket out of here. I am sending you a picture of my son. He is being poisoned here. It breaks my heart. We cannot even get workman's comp and have huge families. We are the poor of southern West Virginia..

State regulators are telling the people that it's an "improvement" to flatten a forested mountain, seed it with grass and hope that some shrubs will grow -- and then allow hunters who have signed "the appropriate waivers of liability, indemnifications and assumptions of risks" to hunt whatever animals might choose to inhabit such barren fields.

As humorist Dave Barry says, we're not making this up, although we wish we were.

Let me make one thing clear... there is no such thing as clean coal!!!

I wish President Obama would stop using the term and take CEQ chief Nancy Sutley and EPA head Lisa Jackson to visit these unfortunate mining sites under their jurisdiction.

When we flip the switch to turn our lights on, most of us have no idea where that power comes from.

According to the U.S. dept. of energy, more than 50% of our electricity comes from coal.

Coal emits much more carbon (CO2) per unit of energy than oil and natural gas. From the acid drainage of mines polluting rivers and streams, to the release of mercury and other toxins when its burned into the atmosphere, the fine particulates that wreak havoc on human health, and the colossal waste, coal pollutes every step of the way

"Clean coal" is the industry's attempt to "clean up" its dirty image -- the industry's greenwash buzzword. It is not a new type of coal. "Clean coal" methods only move pollutants from one waste stream to another. Coal is a dirty business!

The good news is we have a solution! A study of the long-term benefits of infinite Wind Power versus finite coal MTR in Coal River Mountain, West Virginia already exists. They show "excellent potential" for efficiency, productivity and economic benefit. Though it doesn't have short-term financial returns, wind promises to provide clean, inexpensive energy and offers scores of safe jobs for the long term. Just check out the staggering figures from a report released by the American Wind Energy Association: "wind industry jobs jumped to 85,000 in 2008, a 70% increase from the previous year." Renewable energy will continue to grow exponentially, whereas mining jobs have decreased or remained relatively stagnant at "81,000 workers" for over 20 years, according to the 2007 U.S. dept of energy report.

I can understand why those who live in coal towns are frustrated, because while we have this technology available to us now -- it is still just "a promise" in these regions. 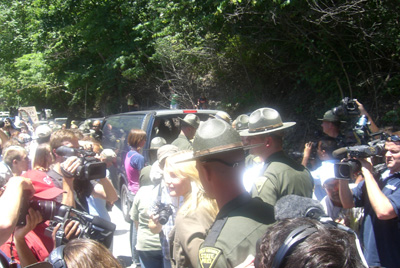 It's imperative we let our president, our elected public servants and entrepreneurs know that this is where we want our investment to be directed.

Hopefully some wise, forward thinking heroes will step up the plate, build the wind farm and take this incredible win, win, wind, opportunity to bury the dirty dinosaur of Mountain Top Removal forever.