I was not a fan of Portugal when I first arrived. Let's just get that off my chest right now.

If I had it my way in the beginning, I would probably never go back. Unless someone said "hey let's go to Portugal in NOT January and sit on the beach." Of course, I'm glad I did go considering Lisbon is one of the oldest cities in the world, and that's kind of a big deal. Not to mention Portuguese food is pretty top notch, and I love to eat!

My husband and I were in Ireland for two weeks in January and exclaimed GOSH IT'S COLD HERE EVEN THOUGH THERE ISN'T ANY SNOW. So we peace'd out to Portugal to get away from it. We had zero plans to go to Portugal on this trip and two weeks in, we changed our minds. It was a good decision. Nice to get out of the cold. Don't get me wrong, Ireland is still one of my favourite countries I've been to and I would sacrifice a virgin to get back there.

We went to Faro, Lisbon, & Sintra. Faro is at the bottom of Portugal and is a super cute fishing town. I had the best salmon of my life in Faro. Lisbon is HUGE and filled with some seriously awesome graffiti, a kick ass aquarium and funky streets everywhere. I also was made fun of by locals because my Canadian was showing. I kept apologizing for standing in the way of a train door, to which they then mocked me for it. I probably apologized for apologizing.

Anyways, this entry isn't about Faro & Lisbon. It's about Sintra. The place that changed my mind completely about Portugal.

Sintra is a UNESCO World Heritage Site because it's tiny town centre is covered in 19th Century romantic architecture and is settled below the fairy tale Pena Palace (15th Century) and Castelo dos Mouros (8th Century). 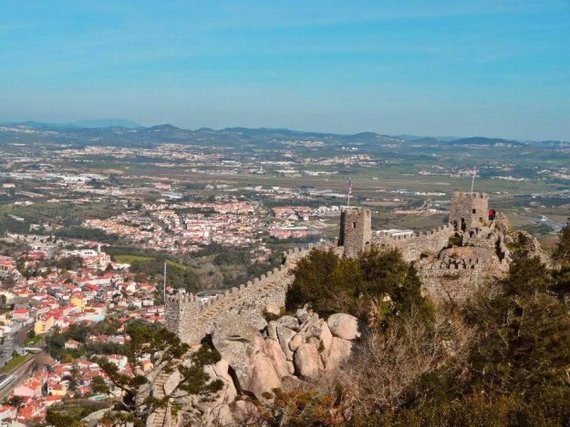 View of the castle from above. Sintra to the left of it. Jokers to the right.

Y'know, I always found it relatively funny as to why people would build their castles high above in the most unfriendly terrain possible. Climbing up to this bad mother was a pain in the ass. But then I thought: Oh wait, that makes sense. It's harder for assholes to invade this way. I sure as hell wouldn't want to invade a castle on the side of a hill. 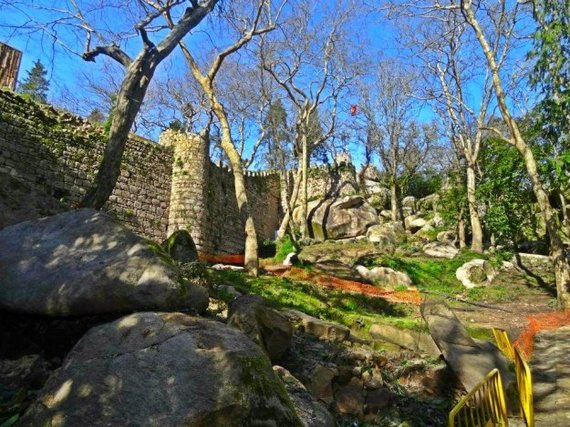 On the right side of these stairs is a very long and painful plunge down to the earth below. On the left side is a shorter but probably still painful plunge down to the middle of the castle. Safety was not first and nor did the people of Sintra decide to put in any handrails. The steps were all different shapes and sizes. We fell quite a bit and it was definitely terrifying trying to climb up to the top. 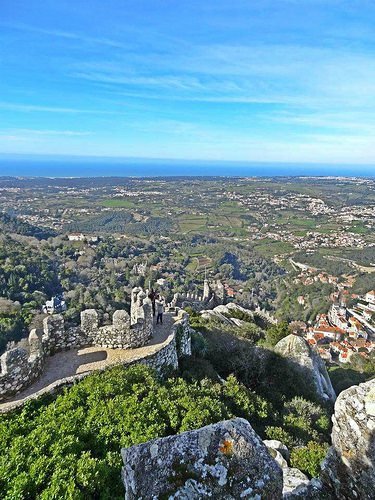 Do not fall left, do not fall right. I don't know who designed this fucking castle but good lord, HOW DID YOU BUILD THIS THING. Probably with a lot of deaths, actually. If you're prone to vertigo and terrified of heights, this is not the place for you. 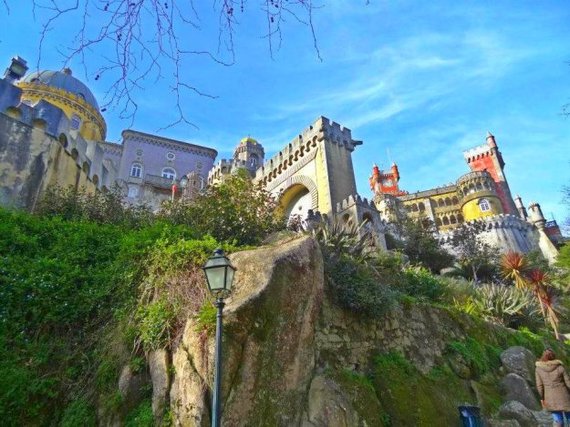 Husband: Who designed this place?!
Me: Cinderella on acid?

Pena Palace is stunning. It's probably one of the most gorgeous structures I've seen from the outside and the inside. The reason it was built? Some peeps saw an apparition of the Virgin Mary. I think that's kind of a SLIGHT overreaction but I assume back then it was of the norm. See the Virgin, build a palace. 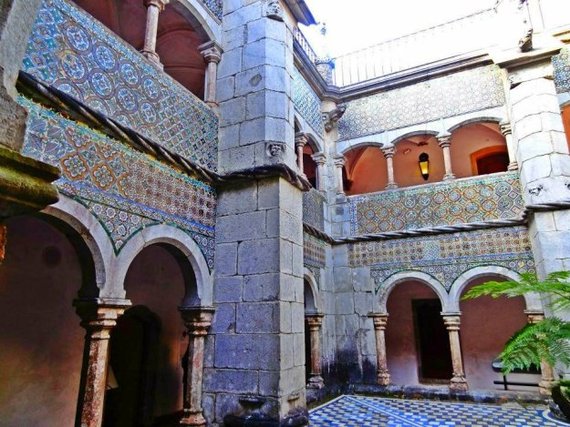 Walls of the courtyard.

There were TONS of stone faces hiding throughout the palace. A lot of them were in this courtyard. If you look closely, you can see two of them. Why? Because.....reasons. To freak future people out. Worked like a charm. I think this palace would be a nightmare of a place to visit at night. Which I totally want to do. Speaking of faces... 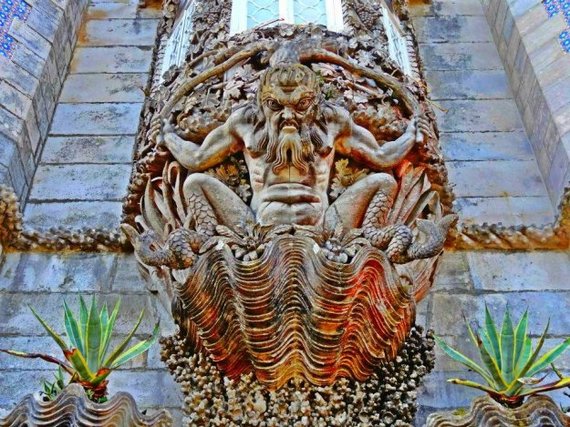 A thing of nightmares

Newt: symbolizing the allegory of creation of the world. Also makes a perfect welcoming feature in your home apparently. This mother is at the front doors peering into your soul and whispering into your ear abandon all hope, ye who enter here. 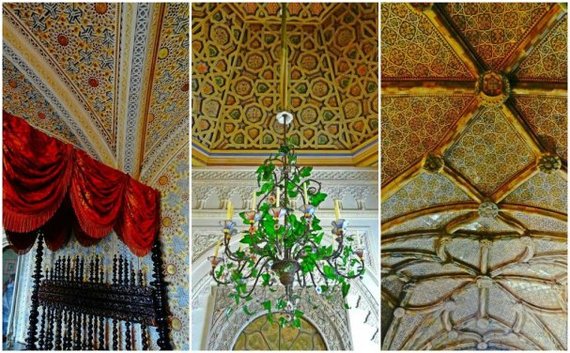 I don't know about you, but I love myself a good ceiling. The inside of Pena Palace is just breathtaking in every way possible. From floor to ceiling, everything is hand painted, hand carved, and every room is completely different from the rest. Different colours in every room! Every nook and cranny has a change in decor. An absolute stunner and probably the worst place for a minimalist to venture to. 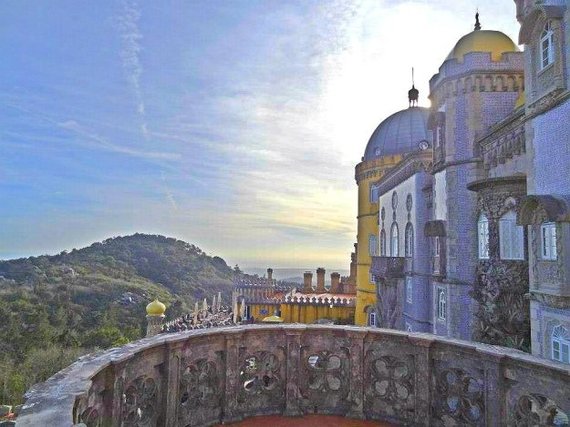 Wave to your peasants, Queen.

This is the Queen's balcony and the view didn't suck. It was MASSIVE with a bright red floor. Great for entertaining! That forest off in the distance is where we headed out to next because apparently we weren't done exploring for the day. The palace looks taller than the forest when really, the forest is a lot higher up than the palace. Perception is NEAT. 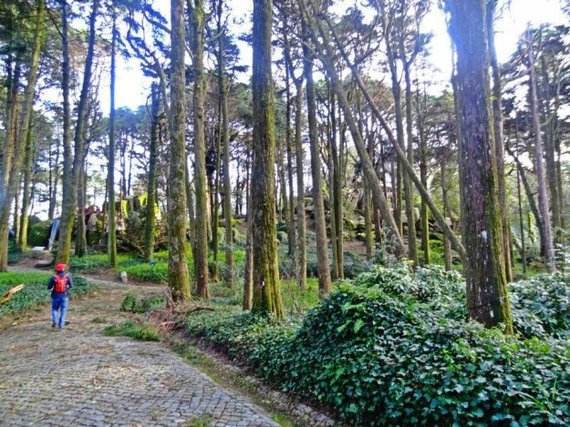 The nice thing about going to Portugal in January is that there was NO ONE, not ONE person on this trek. As you can see, the pathway hasn't been cleared off in a while. We came across massive trees that had been struck down and covered the path. I figured we were in an off limits area but we decided to yolo our way through this majestic LoTR's inspired forest. 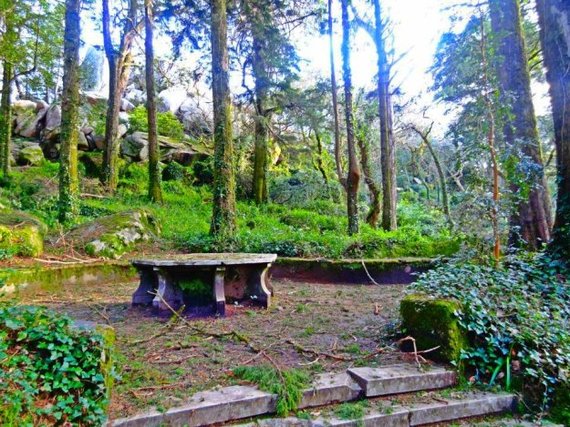 I will take the ring!

STRAIGHT OUTTA RIVENDELL. This is where the Queen, or Elrond, would have their secret meetings. What do you even talk about here and why isn't this in my backyard? Is this where the discussions of which tapestry should go in which room in the Palace? I hope so. It would be amazing if the Queen used this as a random work space and not for something majestic. 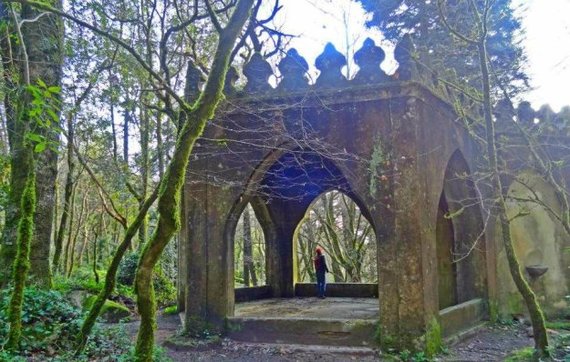 And then there was this place.

I have no idea what this was used for. I know what you're thinking: Wow Carolyn, you would make for the worst travel guide ever. The signs were few and the ones that existed were not in English. But it was probably for something amazing, like training unicorns and cherubs how to fly. 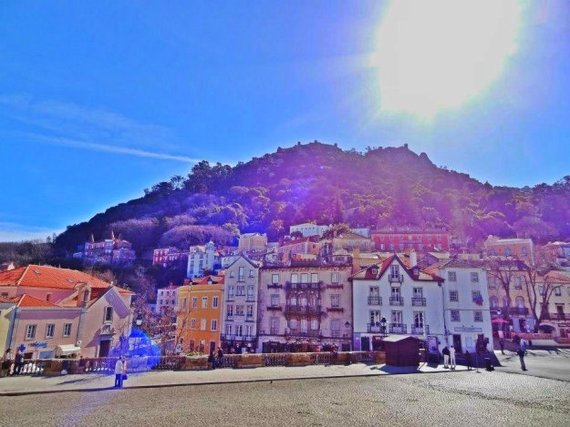 The town centre of Sintra is small but beautiful. And you must try the local favourite: a shot of cherry liqueur in a chocolate cup.

If you're planning on going to Portugal or you're on the fence about it, just do it. Go to Lisbon for a couple days, go to the coast for the beach, and definitely hit up Sintra. It's right outside Lisbon so you might as well DO IT. The town is awesome, the castle was terrifying, and the palace was absolutely out of this world.

Lover of slayers, hobbits, time lords & zombies along with travel, food, and fitness.