The first time I encountered Buckminster Fuller was in the late 1960s at the University of Minnesota where I was studying architecture. Bucky (as he preferred to be called) would regularly come on campus and recruit students to help with his latest geodesic dome experimental projects.

He especially attracted architecture and engineering students to build domes and listen to his endless anti-war rhetoric. Little did I know that this diminutive man with the limp and Coke bottle glasses was in fact a singularly insightful genius with a plan to do much more than just end the Vietnam War. 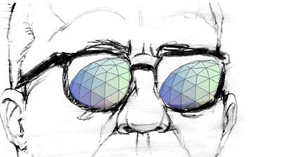 Bucky was on a mission to create his vision of "a world that works for everyone," and he was relying on science, technology and data to convince others that his quest was viable. Only years later would I learn that he was also conducting a personal experiment that lasted from 1927 until his death in 1983.

That quest became known as his 56-Year Experiment to determine and document what one individual (Guinea Pig B for Bucky) could achieve that could not be accomplished by any government, corporation, religion or organization no matter how large or powerful. Since Bucky's death, I have been analyzing his experiment and using the ideas he found to be workable in my own life, and I can state from person experience that in living his life as a global citizen working on behalf of all people, he created the template for anyone to make a significant difference with their life.

Here's how Bucky described his initial discipline when he decided not to commit suicide in 1927:

"So I vowed to keep myself alive, but only if I would never use me again for just me. I vowed to do my own thinking, instead of trying to accommodate everyone else's opinion, credos and theories. I vowed to apply my own inventory of experiences to the solving of problems that affect everyone aboard planet Earth."

In contemplating this commitment, I have found it extremely similar to the Buddhist Bodhisattva Vow, and many people contend that Bucky was in fact a living Bodhisattva wearing a three-piece suit in order to not stand out from his contemporaries. Regardless of his appearance, his mission became clearer and clearer until he honed it down to the following simple yet powerful sentence:

"To make the world work for 100 percent of humanity in the shortest possible time through spontaneous cooperation without ecological damage or disadvantage to anyone."

Bucky went about fulfilling that mission primarily through experimentation and education, both of himself and others. And he often chided his audiences not to believe him or any other "expert," but, rather, to check everything out against your own personal experience and accept only what fits that experience. Still, he offered some fairly radical ideas about the state of humankind and the planet he named Spaceship Earth. He said:

"There is no energy crisis, food crisis or environmental crisis. This is only a crisis of ignorance."

And the primary ignorance he talked and wrote about was the fact that we have reached a point in our evolution where there is enough of everything to support all life on Earth. This makes war, politics, starvation, poverty and other suffering obsolete. As Bucky so eloquently put it:

"It is now highly feasible to take care of everybody on Earth at a higher standard of living than any have ever known. It no longer has to be you or me. Selfishness is unnecessary. War is obsolete. It is a mater of converting the high technology from weaponry to livingry."

"We now have four [in 1983, currently that number is seven] billion billionaires on board Spaceship Earth who are entirely unaware of their good fortune."

And those are just a couple of the primary reasons I celebrate Bucky's birthday every year on July 12. He had vision in the 1930s to inventory all the Earth's resources and see that we humans were constantly doing more with less. He extrapolated that if we kept doing this "more with lessing," we would reach a point where there would be enough for everyone. He calculated that moment to be about 1976, which we now know is the year that our production of food on Earth became bountiful enough to feed everyone. Then, as now, it becomes a matter of overcoming politics, greed and ignorance so that everyone on Earth can eat and 50,000 people will not die of starvation today.

By acknowledging Bucky's contribution and following his admonition to shift our focus and resources from weaponry to livingry, we can create a world that works for everyone. And we can each make a difference in this quest. As Bucky often said:

This year, I will be celebrating Bucky's 120th Birthday on July 12 at Ada's Bookstore in Seattle starting at 7 p.m. Everyone is welcome.