My mother was raised on a farm and she could grow anything. Her gardens were full of vegetables and her porches were always filled with pots full of petunias and begonias. She loved to work out in the yard on her flowers or to go grubbing (that's what she called it) in her garden. She said it was her therapy and she spent hours planting, fertilizing and watering. As a result, her yard could have been featured in Southern Living magazine.

I was not raised on a farm and I kill plants just by looking at them. My husband swears when I walk by plants at a nursery they beg me not to buy them. The only magazine that might feature my yard is Earth magazine when it focuses on natural disasters.

Even though I had killed more plants than a family of Japanese beetles, one of my sons was not giving up. He was in college at the time and he didn't come home often. The Friday before Mother's Day, he surprised me by coming home and bringing me a gift.

"I brought you something for Mother's Day, Mom," he said.

Silently, I thought to myself, please don't let it be something I have to plant or water.

He reached into his car and handed me a Bonsai tree that looked similar to this one. 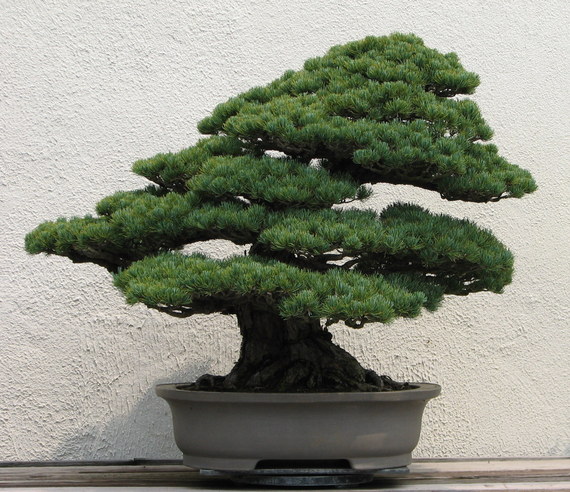 I looked at it warily as I listened to him talk about the history of Bonsai trees, even though I already knew about them I listened intently. I hugged my son and thanked him. Of all my children, he has the hardest time showing affection and I was truly touched by his gift. The problem was, his gift did not want to be touched by me. I knew if I messed with it, the poor tree was doomed.

I wasn't sure he was right, but I thought I might be able to handle it, especially if it didn't have to be watered often.

After my son went back to college, I read how to take care of Bonsai trees and did my best to follow instructions. After just a few weeks, this is what it looked like. 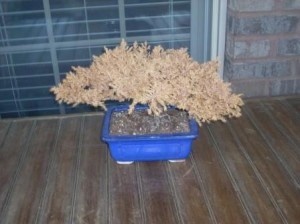 Every time I walked by it, I cringed. If I just threw it away my son would be hurt, but if he saw what I had done to it that might be worse. It was such a sweet and thoughtful gift and I had tried to take care of it. I really had. The directions had said don't water until the soil gets slightly dry. Judging by the way the tree looked, I had waited a tad too long.

Before I could decide what to do about it, my son came home from college again. He walked right past the tree, stopped suddenly, turned around and walked back over to the tree.

"It's OK, Mom. Thank goodness you were better with kids than plants," he said and went on in the house.

And that, my friends, is why I won't be getting flowers (or plants) for Mother's Day.