The news is that Alphabet/Sidewalk Labs is looking to build a city from the ground up. My first reaction when I heard this was 'Sign me up!'

And then I started to read more speculations and the proposition became less desirable with every word. Why you ask? Well, I'll share the things that Sidewalk Labs can do to avoid making the mistake of building a city the way one builds a company and consequently dooming the city before it even starts.

It shouldn't be a surprise to most, considering how ambitious Alphabet is, that the idea of building a city would be one under consideration. I wrote about the ambition to own our energy and cities a few months ago. Larry Page (and Sergey Brin) is a student of company evolution and the organic nature of cities. But all the articles are stating that the project, codenamed Sidewalk, will be used as a testbed for self driving cars, high speed internet, smart connected devices and maybe even some of the scary robots that Alphabet has in its portfolio. Reports claim that 100s of city planners and technologists have been hired to design and build this techutopia. All this under Sidewalk labs, the Google project that became a company focused on 'working with cities to build products addressing big urban problems'. So what is the problem with this approach to building a city from the ground up? Three systems issues 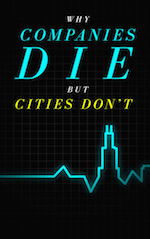 The Information reports that Denver and Detroit are being considered as test beds. If that is the case then this city will not be built from the ground up (phew!). It will just be the next stage in the evolution of a city, the one selected, that currently exists. Cities are truly just physical expressions of who we are and the things that matter to us as human beings. We still have a ways to go before technology fully replicates that...