I was thrilled when a friend of mine, Henry Amador, blogger and founder of Dadsquared, addressed the topic of being a gay dad in a blog post. He captures the essence of the extra effort that most of us who are gay dads have put in to become fathers when he writes:

[N]ow we too are grown. We finally fit into our skins. We have passed your foolish tests and questions with flying colors. If we made it and we are here and we have children that call us dads then we have leapt over hurdles never imagined. We, like all other groups that have suffered at the hands of another, have risen above it. We have taken ownership of who and what we are. We have come to identify with what we are. We have come to be proud of what we are. So you ask, why do I call my self a Gay dad? Well because I made it and that is what I am.

I felt moved by his words and related to them. I felt compelled to share them, and soon thereafter I was being called on to defend them. A fellow blogger and supporter of equal rights sent me a text that read, "Where does the battle end? Isn't the ultimate victory call to call yourself a dad -- without a qualifier?" 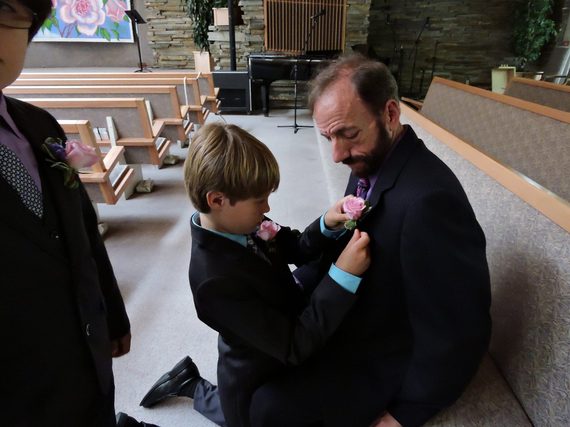 Here is my response, to him and to the world.

There are many paths to fatherhood, and there have been many great types of fathers. Unfortunately, there also have been accidental and unwilling fathers, as well as fathers who showed up and then checked out. Do we need to qualify each dad to indicate which of those groups he belongs to? No. It is true that gay dads are, almost by definition, "intentional dads" in the vast majority of cases. Not only must we have sought to become dads but we usually had to plan, invest and sometimes train to qualify to become dads. Does this inherently mean that a gay dad is better than a "regular" dad? Not always. I trained for three years and fostered a number of children before getting my own. When they came into my life, I was not a parenting novice. That being said, there are no dads whom I care to go up against in a competition. I know many awesome dads, most with some talent or other that I do not possess.

I do not call myself a "gay dad" because I think I am better.

Many dads walk into roles in their families that are handed to them. Parents in previous generations, popular culture, television shows, and movies, and even self-expectation, have molded the roles. Conversely, gay dads have the entire parenting spectrum as an option. Gay dads may be breadwinners, homemakers or a combination of the two. We work with our partners and mix and match parenting roles in the way that best suits our talents or abilities. More and more modern families with stay-at-home-dads are doing the same.

I do not call myself a "gay dad" because I feel freer of gender roles.

Science is now telling us that gay dads are neurologically different from both straight moms and straight dads. A new study by neuropsychologist Ruth Feldman, published in Proceedings of the National Academy of Sciences, found that, as Reuters' Sharon Begley put it, "gay fathers raising children with their husbands seemed to be both mom and dad, brain-wise. Their emotional circuits were as active as those of mothers and the interpretive circuits showed the same extra activity as that of heterosexual fathers."

I do not call myself a "gay dad" because my brain apparently spans the breadth of both motherhood and fatherhood.

It should also be noted that I do not call myself a "gay dad" in day-to-day activities with my kids. In my talks with my boys, I do not say, "Well, guys, it's because I'm your gay dad." I am just "Dad." I do not walk into my son's classroom and introduce myself to the teacher by saying, "Hi! I'm Jesse's gay dad." I am just "Jesse's dad."

I do not call myself a "gay dad" every day.

Throughout the 1990s the Catholic Church called gay people "intrinsically disordered" and declared that same-sex parents were doing "violence" to their children. There are many who still hold these beliefs. Currently, if I moved my family just a few hundred miles east, because I am a same-sex parent, our family's legal protections would be thrown into turmoil, and protections for my sons would change. In Texas a male couple fathered twins through a surrogate, yet neither of them was permitted to list his name on either child's birth certificate, even though each of the men is the biological father of one of the twins. Throughout the country, too many kids who come out to their families not only are led to believe that they can never become become parents if they want to but are thrown out of their homes; as a result, as much as 40 percent of all homeless teens in the country are LGBT. Last year the Boy Scouts of America sent out a survey to all its participants asking whether gay adults like me are worthy of being considered safe around other families' children. The answer they received was "no." And often, when my writings are published, I am criticized by strangers who say things like, "Your children were underprivileged by being placed in foster care. Haven't they suffered enough without you depriving them of a mother?"

I will write as a "gay dad" until a whole generation of people do not see being a gay dad as any different from being any other type of parent. I will lay out the details of my life so that gay dads can be known and seen as the blissfully ordinary creatures we are.

I will write as a "gay dad" so that if it turns out that one of my sons identifies as gay, he will not feel that life has dealt him a raw deal. In that moment he will see himself as completely whole and able to achieve his dreams.

He will see that, if he wants, he can grow up and be just like his dad.