I'm a huge fan of the blog Reel Girl, whose tagline "Imagining gender equality in the fantasy world" says it all. It was on Reel Girl's Facebook wall that the exchange below took place. The thread was about this article in Forbes titled "'Night At The Museum 3' Posters Reveal Seven Men, One Woman." 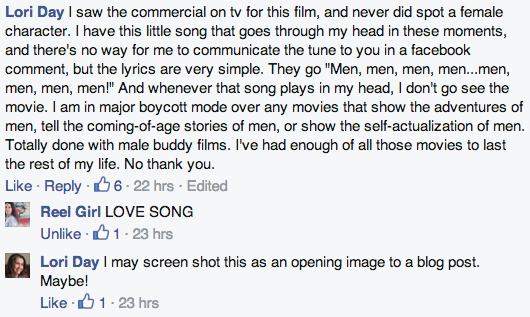 I've obviously gotten radical, stubborn, inflexible and up-to-my-eyeballs-fed-up with this obscene stage hogging, and am in desperate need of a shepherd's crook to remove superfluous male bodies from the world's movie sets. I've spent half a century watching films that are by, for, and about men. I've paid too much of my hard-earned money supporting a fantasy world where half the human population has gone missing.

Please allow me to direct you to the Geena Davis Institute on Gender in Media for any stats you may need to convince you of this grotesque and sweeping gender disparity or, alternatively, to fuel your misogyny as you search for opposing fake stats to deny what blatantly goes on right in front of millions of eyeballs every year. I'll only share one statistic with you, because it's my favorite. Did you know that the average crowd scene contains 17 percent women? I know! You can't believe it! But pay attention in the theater, and you'll see it immediately. Geena Davis was interviewed about this and said:

Recently a fan on my Facebook author page sprinted for Olympic gold in mansplaining by asserting that directors have to cast this way because if there were anything more than 17 percent women in a crowd, the "average viewer" would perceive the scene as totally overrun by women. What are you talking about, you absolutely brainless sea monkey? Not only are females 51 percent of the human population, but we also bankroll Hollywood. Women buy the most movie tickets. Go to hell, amigo. (Yes, I banned him).

There are hundreds if not thousands of articles on the problem of gender imbalance in all aspects of movie making in Hollywood and I'm not going to write another one. Wait, so what am I writing about, then? I'm writing about how this makes me feel, which is shitty and furious and apoplectic. If you don't want to hear it, then move along little doggie, out you go.

On Thanksgiving last week I overheard a brief exchange about the new Brad Pitt film, Fury. People were saying it's one of the best World War II movies ever made. Maybe it is, maybe it isn't, and no disrespect intended toward my friends and relatives who have enjoyed or will enjoy this film. But me? I am not interested in war movies, though Lord knows they're a popular genre! I could not care less about Fury, even if it would have received 1,000 thumbs up from the dearly departed Siskel & Ebert.

War movies are not just historical and important and great art. They are code for -- and efficient vehicles for -- movies about men. I looked up Fury's cast on the Internet. Two women appeared at the bottom of the first 20 actors listed on IMDB, a tedious and interminable list of male actors that became impossible to count in my post-Thanksgiving food coma, and remained impossible to count the next morning when I had my wits about me. I know, I know... #notallmovies. There's Thelma and Louise! There's Fried Green Tomatoes! And Bridesmaids! Quitcherbitchin, ladies!

One of the funniest experiences I've had this year was sitting in the local cinema with my sister-in-law and watching previews before the main attraction. I started singing my "Men, Men, Men, Men" song very quietly under my breath for each male-dominated preview, and after each one, I would reassuringly whisper to her, "Don't worry, I'm sure the next preview will have a woman in it!" We would giggle and wait and watch, and then, about 90 seconds later, I'd sing my little ditty again, and once more express my complete certainty that we were merely moments away from seeing a preview of a movie either about a woman or including one or two of them in the dozen or so scene cuts. And when that never happened once, we could barely stifle our laughter in the quiet theater, because really, how else does one deal with such absurdity?

I had a short but uplifting conversation during the Thanksgiving meal with my nephew Paul-Emile Cendron, the son of my sister-in-law who put up with my silly singing in the movie theater a few months ago. It was about the fantastic new HBO miniseries Olive Kittredge, starring one of my favorite actresses, Frances McDormand. My nephew is 24 and he's an actor who recently appeared as Robert Duvall's grandson in The Judge. I did go see that movie, making an exception for yet another cinematic celebration of masculinity, because how could I boycott the movie that gave my nephew his first role?

So perhaps you can see why it meant so much to me that this young actor -- fresh off a film set starring mostly men about a father-son relationship and the relationship between three brothers -- would rave about the power of McDormand's role, and understand why I felt so grateful seeing McDormand produce this film and play its aging, unsympathetic, complex female protagonist who was not sexualized or killed off early.

Sometimes it's the little things!

Maybe in my dotage I'll be able to watch movies that accurately represent my gender both quantitatively and qualitatively. If not, I'll just keep up my personal boycott because maybe I enjoy feeling bitter and exacting miniscule and inconsequential revenge on an industry that shapes more than it mirrors our society. Pfft, whatever. I'm not sliding into any pulsating, gaping void of despair. I'm waiting for whatever Frances McDormand is going to do next!