As an educator myself, I always loved your demonstrations of how things work. They always made perfect sense to me.

Yesterday, however, I watched in horror as you brought on talented guest and "illusionist" Andrew Mayne. (The episode originally aired on 2/6/14, but I just happen to see it yesterday.) Your topic was "Debunking Medical Myths." One question you posed to your audience was, "Can you really drink too much water?" All was fine, until Andrew demonstrated how to freeze a rose with liquid nitrogen. Cool, yes, but what was the connection to drinking too much water? Was I supposed to learn that if I drink too much water I will crack into a 1,000 pieces under the pressure of a hammer?

Then, he put some of the liquid nitrogen in his mouth. There was no explanation as to why his mouth didn't freeze, and you missed an excellent opportunity to educate your audience on the science of the Leidenfrost Effect. That would have been a great lesson, even though it would have had nothing to do with your big question, "Can you really drink too much water?" I missed the connection between Andrew's dangerous demonstration and how drinking too much water affects your body. Yes, you said not to do this at home, but I fear for others who watched your show during a prime time on network TV, who may try it anyway. 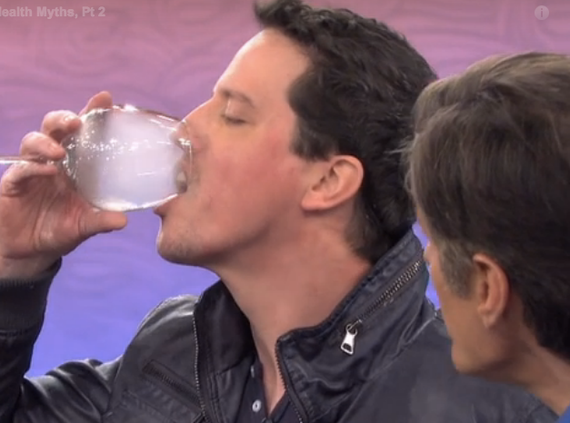 So, then your next big question was "Is it true you should feed a cold and starve a fever?" In response, Andrew Mayne placed a 5-inch long meat thermometer through his sinus cavity. Huh? Again, you said not to do this at home. Perhaps it would have been good to explain what could go wrong if you DO try it at home.

Andrew did not even attempt to explain these away as "illusions." He even said that he likes to use the body's actual capacity to push the limits of, what I would call, common sense. I still don't know the answer to the medical myths you were "debunking." I do now know that it is possible to drink liquid nitrogen, and it is possible to stick a sharp object 5 inches deep into my nasal cavity. I also know that without any explanation, those stunts can do harm. 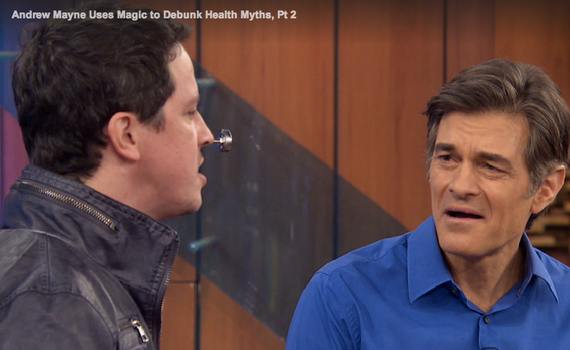 Many people go to magic shows, and enjoy watching illusionists such as Andrew Mayne. No explanation for stunts is provided, nor expected. People expect to see crazy things and assume there is some "trick." This is not the same as watching these stunts on the Dr. Oz Show under the guise of debunking medical myths, especially when there is no connection provided.

Dr. Oz, people look to you as a role model. Your personable style of engaging audiences has served you well, and many people are better off for having watched your show. I think now, however, people will not be better off. In your efforts to be entertaining, you've lost your way.

Learning with others since 1962. Blogger, Educator, Geek, Thought Leader. Warning: I Speak Up