Imagine a world where every woman and girl is strong, safe, powerful, and heard. No exceptions.

Can you imagine it? A world where every girl has access to education, every woman can decide if and when she marries, where women get equal pay for work and can freely run for any office. A world where girls can go to school without the fear of being kidnapped and abused, and where women and girls are not subjected to domestic violence and rape. A world where a girl's life is not pre-determined but self-determined.

At Global Fund for Women, we don't just imagine that world. We want to realize it. And every day we're working with fearless women and girls to make it happen.

The time is now. Just last month, world leaders of 193 nations met at the United Nations to commit to 17 new Sustainable Development Goals. Goal 5 commits the world to 'achieve gender equality and empower all women and girls' by 2030. The political declarations must be matched with moral obligation. Gender equality is the right thing to do and the outcomes are immense for peace, security, and for communities and economies. And women and girls will not wait any longer.

Since four bold women founded my organization, Global Fund for Women, 27 years ago, women and girls have proved they can move mountains. They can turn domestic violence from a private issue to matter of urgent public concern. They can end civil wars, elect women presidents, and pass new laws that transform women's rights, safety, and opportunities. Global Fund for Women has invested in thousands of bold women and girls leading nearly 5,000 groups. With these partners, we have supported and sustained organizations and social movements which have pushed hard and won rights for millions of women and girls. And these activists are bold, and ready to do more.

Our Determined campaign shines light on 20 incredible women and girls who define our ambition. All of them work with, or have been supported by, our grantee partners - women-led, grassroots groups we support through grants, advocacy, and collective learning. They are resilient, bold, and committed. Their actions create the conditions where women's lives are self-determined, not pre-determined.

Sixteen-year-old Maria Fernanda, a powerful girl, is committed to helping prevent teen pregnancy by empowering other girls in Nicaragua, which has the highest adolescent pregnancy rate in Latin America. Maria is an incredible leader in her community, educating others about their rights. In Maria's words: "I want people to know that just because I am a woman doesn't mean that I am less."

Asipa in Kyrgyzstan turned an accident at age 17 into a fearless opportunity, and a commitment to advocate for women with disabilities. She has risked her life, even being arrested for taking part in public demonstration for a law to make public spaces accessible for people with disabilities. The law was rejected several times but Asipa continued to campaign for it, until eventually the law was adopted.

Yeri was 16 years old when she was taken out of school and forced into an arranged marriage. Now 45, she refuses to let harmful traditional practices like those she experienced persist and diminish other girls. Yeri, together with other women in her community in Burkina Faso, is determined to end child marriage and female genital mutilation.

Every day in my work and life, I meet and interact with girls and women like the ones we feature in Determined. There are millions of them. 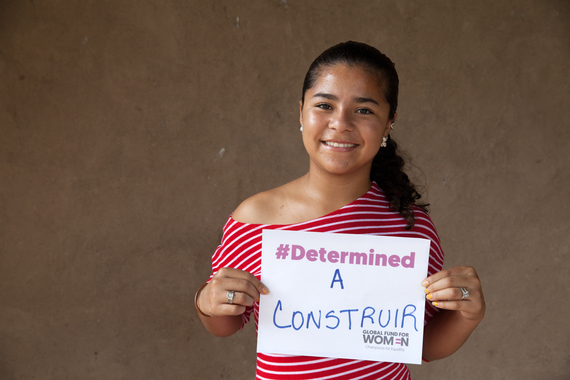 I myself was fortunate to be born in a family where our parents gave their daughters and sons the same opportunity to go to school and to realize and make our own choices in life. Like the women in our campaign, I became determined as a result of my life experiences. I'm determined to make equality of opportunity a reality for other women and girls everywhere. No exceptions.

The needs are urgent. Girls everywhere are dying from the effects of early pregnancy before their bodies are ready. Yet other girls are ready to embrace new education and technology, and become co-leaders - with men - in changing the world. They want this today, not tomorrow. The wind is blowing in the right direction. Many people now see the moral value, the economic and social gains, and the benefits to the health of our planet that will result from gender equality.

So, how can you make a difference to drive gender equality? Join me. Together, let's drive change toward the world we're imagining, where every woman and girl is strong, safe, powerful, and heard - no exceptions.