My daughter Delilah is six and since starting Kindergarten she has come home almost every day with another bruise, bump or scrape. This makes me quietly happy and tremendously proud. It's not that I want Delilah to get hurt. I am grateful that for six years she has lived a relatively pain-free, healthy life. 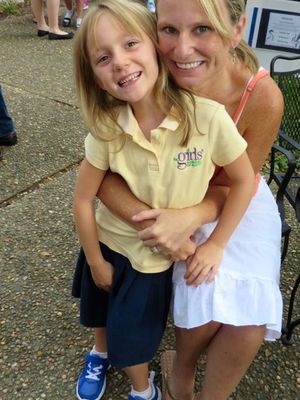 Instead, I am proud because she is so healthy, because she is able to take chances, to jump, to run, to climb, to participate. Because after years of being cautious and trying not to get too dirty, my daughter is experiencing life and realizing it's worth living to its fullest, even if it hurts sometimes. While I'd like to take all the credit for this change, I have no doubt that it's the result of attending an all-girls school.

I grew up in a small town in New York State. I went to public school. I was an excellent student and received a great education. My teachers were dedicated and well-respected and I still remember all of their names. However, something happened in fourth grade. An early bloomer, I sprouted breasts and they began to get in the way of my education and my self-confidence.

Until then, my brother, five years older than I, taught me how to climb trees, run in the rain, hit baseballs, make mud pies, drive matchbox cars through dirt paths in the flowerbeds, and experience the thrill of riding on the back of a dirt bike. I knew how to hang with the boys. I knew how to step up and participate and there was no reason not to.

Then came the breasts. I didn't want them. All of a sudden I was different and uncomfortable in my own skin. I shrank a little more, I stopped participating, my hand didn't shoot up as fast in math class as it once did and I started "playing like a girl" in every area of my life.

This is why I choose to spend Delilah's college money now on a private all-girls grade school. At the Girls' School of Austin, Delilah definitely "plays like a girl" which means something entirely different from what it meant to me growing up and what the phrase typically represents.

"As a college professor I could identify students from girls' schools with a 90 percent accuracy rate on the first day of class. They were the young women whose hands shot up in the air, who were not afraid to defend their positions, and who assumed that I would be interested in their perspective" ~ Dr. Robin Robertson

So every day when Delilah comes home dirty, exhausted, with another scrape or bruise, it's hard for me not to smile, not to beam with pride at who she's becoming; a girl confident enough in her abilities to raise her hand and speak her mind -- and one who is willing to take a chance, knowing that when she jumps she might fall, but jumps anyway.

More:
Parentsall-girls schoolconfidenceparents-moms
Newsletter Sign Up
Raise the kind of person you'd like to know
Subscribe to our parenting newsletter.
Successfully Subscribed!
Realness delivered to your inbox