I have been a Patriots fan for almost 15 years. I have spent countless hours cheering for my team, making sure I sat in the lucky seat, wore the lucky t-shirt, bought the lucky hoodie. I had the opportunity to go to Super Bowl XLIX and I cheered as they beat the Seahawks on Malcolm Butler's last-minute interception (a picture of which I have on the wall in my house). I put a framed poster of Tom Brady holding a goat up in my office. I often got in heated arguments with co-workers defending him when the whole Deflategate fiasco happened. Anyone who knows me knows that I was one of the most diehard Patriots fans out there.

I can no longer in good conscience support the team anymore.

I understand that people have a difference of opinions in politics. If this were purely about politics, I'd understand. If Bill Belichick and Tom Brady had said that they were in favor of smaller government, that would feel different. If they had thrown their support behind a person with decency and values, that would feel different. But they supported a man who disparaged women and minorities countless times during this presidential election. They tacitly endorsed the values with which Trump ran his campaign: racism, misogyny, and fear. Belichick wrote in his letter that Trump's leadership was "amazing". That is the same leadership that called for a ban on Muslims and said Mexicans were rapists. That is the same leadership that has been praised by the KKK.

For me, the most disappointing part in all of this is not that Brady or Belichick are Republicans. Or that they supported and voted for their friend. The most disappointing part is that they never publicly condemned Trump for some of his most appalling language. Brady completely tapped out when he was asked about "locker room talk". He could have said, "I like Trump but I condemn his actions in this video." But we got none of that. "People think it's okay to grab women by the pussy now. Tom Brady, what do you think?" "I'm on to Cincinnati." Well, sorry, Tom, but fandom is not a given, it should be earned. And you just lost mine.

I've seen sports bring out the best and worst in us. It brings people of all backgrounds together, but it also anoints athletes as heroes who may not deserve our adulation. We make excuses for them when they make off-field mistakes. We ignore reports that they beat their wives. We defend them when they get caught cheating the game (allegedly... sorry, knee-jerk reaction). There is a lot of time and energy spent being a sports fan.

That time and energy will now be spent on getting more involved politically, volunteering, and writing columns like this.

That is why I am donating all of my Patriots gear to Goodwill. This haul includes:

(With this inventory I have realized that I was a total scumbag. Still, I may keep my Wilfork t-shirt because he's no longer on the team and he was always my favorite player.) 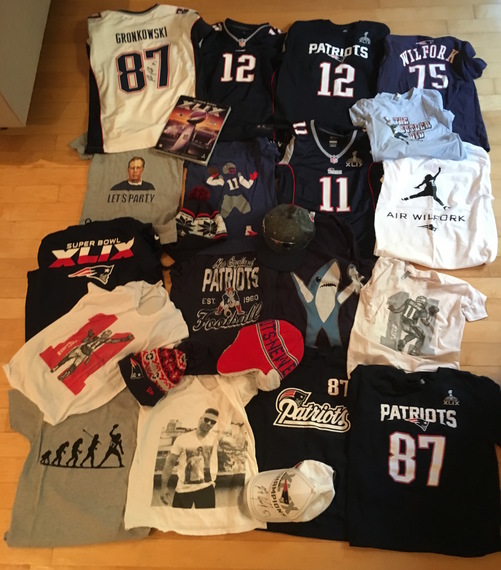 I'm also selling the items of value (a signed Gronk Super Bowl XLIX jersey and hat) on eBay, where the winning bid will be donated to Planned Parenthood in North Carolina. Link here.

Am I sad? Of course. I am giving up a lot of VERY soft t-shirts. And honestly, I will miss the camaraderie of Patriot Nation. I will still remember all the good times fondly: doing snow angels when the Pats first won it all in 2002; quietly crying in a friend's bathroom when we lost the Super Bowl during our undefeated season; crashing the Super Bowl XLIX afterparty in Phoenix and dancing with Troy Brown who for whatever reason was also there.

I don't begrudge anyone who's sticking with the team. For me, personally, I just don't think their success would bring me joy anymore. So... I'm out! I have a LOT of work to do.