Some of the most common questions I was asked as a newlywed were, "Does it feel any different to be married?" "Have you got used to calling him 'husband' yet?" and, of course, "So are you taking his last name?" When I answered in the negative (for all three questions, actually), the latter query was followed up with further questions. "Oh, are you keeping your name for professional reasons? Is it because of all the paperwork hassles with getting new ID? Are there no boys in your family to carry on the name?" And then, in a conspiratorial whisper, "Do you not like your husband's last name?

That's not it, I would reply. I just don't believe in changing one's identity for marriage. 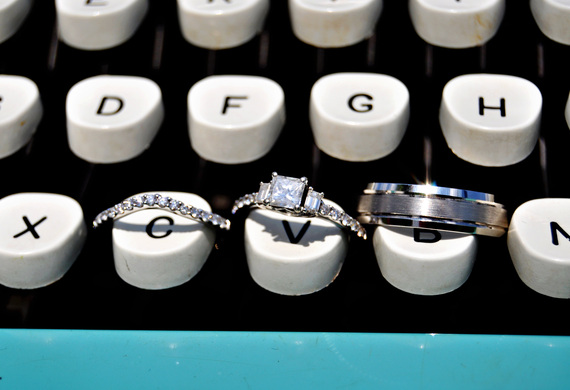 I decided at the ripe old age of 15, almost 10 years before I met the man who would become my husband, that I would not change my name for marriage. At that age, the decision mostly sprung from the fact that I just plain liked my name. I have an unusual first name and last name. Several times I've introduced myself to someone on email and received a message back signed off with "P.S. cool name!" In my brooding teenage years I gave a lot of thought to my name; if asked right now how many letters and syllables are in my first and last names, or in my full name, I could answer without blinking.

To me, as it would be for many other people, my name is my identity. If someone asks you "who are you?" the answer that you give is your first and last name. For me, my name is who I am.

As I grew older, learning more about gender politics and the inequalities that women still face in society cemented that teenage decision to keep my name. The expectation that women should change their last name for marriage, swapping their own identity for their husband's, is -- inarguably -- sexist. And I say "inarguably" because no one could claim there is an expectation of the same name-change in men. I remember a class in college about gender and the media, where a male student asked in our discussion group, "Would you change your name for marriage?"

"No. Would you change your name?" I answered coolly.

To put it bluntly -- as I sometimes do when people really grill me about my decision -- it's not 1950 and I'm not cattle that needs to be branded with my owner's name.

So identity and equality are the two most important factors for me in keeping my name. However, other reasons reinforced my decision, after receiving the following reactions to my matrimonial surname plans...

• "It's tradition": So was slavery. So was women not being able to vote. Tradition doesn't make any of them a good thing.

• "You could still keep your name, but add his with a hyphen": That would still be changing my name and identity, and would not be much of a move for equality unless my groom were doing the same.

• "Well, what if your husband did hyphenate his name, too?": Great for equality, but then it would be two people changing their identity for marriage.

• "What will your children have as a last name?": They could have both our last names hyphenated, mine as a middle name, or just take their father's surname -- none of which I have a problem with. I do think it's unequal that children automatically take their father's name, but other approaches are not yet as widely accepted as women keeping their surnames -- though I think this is will change with time.

• "Won't you not feel like a family if you have a different last name from your children?": I'm quite sure that if I birth and/or raise a child, that's plenty to qualify me for feeling like their family. Whether or not I have the same last name as my child won't stop me loving them or feeling attached to them. Also, with this logic, would I no longer feel like I'm part of my parents' family if I take a different surname from theirs? In these days of blended families, the idea that everyone in a family would have the same last name is a touch old-fashioned.

• "Keeping your maiden name is keeping your father's name; isn't that also sexist?": Yes, it is. However, that's the name I had for the first 29 years of my life before my wedding, and that's who I see myself as.

• "People will refer to you as 'Mrs Reflective Groom' anyway": Yes, they will. A few decades ago it was common to assume any married woman you met was a housewife; that's not a good reason for women to stay out of the workplace. People more familiar with my husband indeed call me 'Mrs. Reflective Groom' on meeting me for the first time -- just as people familiar with me greet him as. 'Mr Reflective Bride.' I'm not going to give them a lecture, just as my groom has not made a big show about correcting people.

• "Ah, you're just afraid of divorce": That's not a reason for my decision, but it is something to consider. I love my husband dearly, and hope we are together until we die in each other's arms at the exact same moment at age 100, but it would be naive not to realize that something like a third of western marriages end in divorce. Would I then change back to my birth name? And if I re-marry, do I change it again to the new husband's name? What am I, a baseball card?

Then there is the reaction I get from brides who have taken their husband's name, who often look a little hurt by my decision: "It's just nice." If you think this way, I applaud you. After all, the same thing could be said about weddings: they're stressful, expensive and time consuming... but, you know what, they're just nice. But the things that make weddings nice are that they bring together family and friends, celebrate your love, and are an excuse for an awesome party. Really consider what you find so nice about changing names. And if it is so nice to have the same last name as your spouse, perhaps it shouldn't only be women stepping up to make the change.

These are my own, personal reasons for maintaining my birth name. If you, however, are not as fond of your name or do not see it as part of your identity -- perhaps because it's from a parent you don't have a good relationship with, the name is something you got teased for, or you just feel it's not particularly you -- then I think marriage is a great opportunity to take a new name. But I believe this should be the case for men as well, and that neither gender should feel obligated to switch names.

If you are debating whether to change your surname for marriage, don't listen to the people who question your decision -- don't even listen to this article -- but take time to ponder for yourself your thoughts on name and identity, and what's important to you. If you, too, do think "it's just nice", ask yourself what you find nice about it before committing to a decision. It's your name, and only you should decide what to do with.