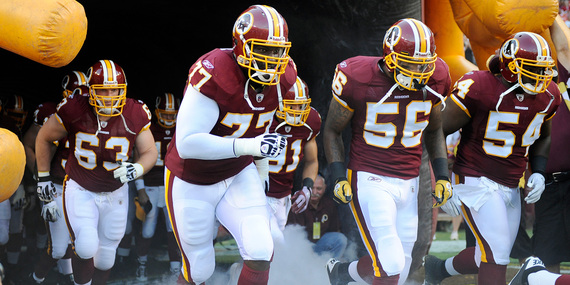 There are 5.2 million Native Americans living in United States, many of whom reside on one of 325 federally recognized reservations. They're severely marginalized in regards to income, education and healthcare.

There are serious problems and challenges to achieving equality and human rights for all Native Americans, and the institutional racism promoted by sports teams' racial slurs and stereotypes is only making it worse.

Many have shown support for initiatives to change racist sports teams names. Even members of the British Parliament have spoken out, writing to the NFL that the Washington Redskins are not welcome to play in London in the fall as scheduled.

The two members of the parliament that wrote the letter claimed that the slur "directly contravenes the values that many in Britain have worked so hard to instill", and requested that America send a different team to represent the country -- "one that does not promote a racist slur."

In America, media organizations and individual journalists have refused to use the names in their articles. President Obama has collaborated with Native Americans to speak against the names and search for solutions. Adidas has gone so far as offering to fund a change of mascot for U.S. high schools that use Native American-inspired mascots.

The U.S. Commission on Civil Rights deems racist sports team names a form of discrimination that infringes upon students' rights by making them feel stereotyped and even limiting their college choices.

Native Americans are speaking out, too. Most telling is the National Congress of American Indians' statement against the names.

The Oneida Indian Nation has also been powerful in protesting the use of racist sports names, protesting outside Redskins football games. A representative of the group, Brandon Stevens, says, "The warrior image is not the image we want to be portrayed. ... We're educators, we're community members, we have families and go to work like everyone else. Having those negative stereotypes takes us back 100 years."

The activism of organizations and individuals that have spoken up is paying off. At the high school level, California Governor Jerry Brown prohibited the use of the term "Redskins". The Oregon Board of Education has banned the use of Native American mascots. Colorado Governor John Hickenlooper has created a commission to research and address the issue with legal action.

If we expect similar action at the collegiate and professional level, it's up to us to speak out, as many already have. That's why I refused to cheer for my hometown (I'm talking to you, RHAM Sachems), and that's why I refuse to cheer for any team that promotes Native American stereotypes and slurs.

10 CuteButPsycho Ways to Get Over a Breakup

Why Dating Your Best Friend's Ex is Wrong