If I were home, I'd probably be watching cable TV. I'd be sharing in national grief over last week's Orlando gun massacre. I'd be watching with disbelief as politicians and gun manufacturers speak once again of "thoughts and prayers" for the victims while doing absolutely nothing to prevent others from becoming victims. I'd be mad and sad and all riled up.

But I'm not at home. I'm at the St. Columba Episcopal Conference and Retreat Center in Memphis, Tennessee. And there's no TV here.

But there is something better.

Camp Able is happening. This amazing project (Campable.org), birthed by my friend Fr. Kyle Bennett and popping up around the country, makes "kids with diverse abilities," as Kyle calls them, the center of attention. Technically, these are kids who differ from the "neurotypical" because of autism, Downs Syndrome, and other conditions. Often they're stared at, made fun of, excluded, and bullied. But here, this week, they're celebrated.

Sharp young counselors, some high-schoolers, some in college, and some a bit older, give a week or more of their summer to give these kids a chance to do things they'd never get to do otherwise. 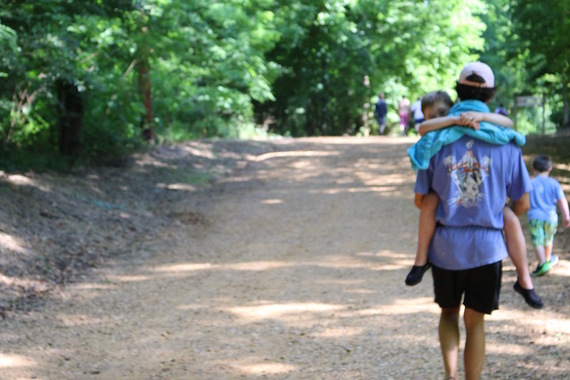 Today, for example, I watched Jared approach a water slide. Other kids slid down it immediately (after coating their stomachs with dish detergent to increase their speed). But Jared wasn't ready, and his counselor, Hayden, patiently watched with him and gently encouraged him that he could try it when he was ready. For at least twenty minutes, he watched, and then got the courage to try the last fifteen feet or so of the slide. He gradually edged himself up, and forty minutes later, he tried it from the top. "Anywhere else," I thought to myself, "nobody would have had the patience to wait for Jared and he wouldn't have had this experience of wet, soapy, giggling delight."

I watched Jean sit with Corwin, a little boy who rarely speaks. After playing basketball with him for a while, she noticed that he was interested in the bugs on the court. So for ten minutes or so, she joined him on hands and knees, watching ants and pill bugs and little beetles make their way across the cement. She simply joined him in silent concentration, reverent curiosity, and timeless wonder.

Meanwhile, Lauren was breathless, chasing her camper David from one place to another. Turbo-charged by his form of autism, David took delight in unplugging, opening, taking apart, tearing, or otherwise scattering and breaking anything he could get his hands on. If he wasn't sprinting to some new potential site for mischief, he was taking off his clothes. I marveled that Lauren could keep up with him, much less not lose her supernatural cool. "She can't be having a good time," I thought. "And there's no way she can last the day, much less the week, at a pace like this."

Then someone turned on some music and David sat down on a bench. Lauren started swaying to the music and soon, David did too. Lauren started singing David's favorite things to the tune of the song ... air vent, cooler, moon bounce, Venetian blinds. For maybe three minutes, David seemed calm and in tune, joining his counselor in the rhythm of joy rather than running her ragged. "This is the best moment of the day for me," I heard her say. "This makes everything worth it."

I watched one counselor gently rub the back of her camper, while another helped her camper color ... slowly, carefully, in no hurry at all. I watched one counselor sit for (literally) hours, simply listening to his camper talk, talk, talk, about Harry Potter, about World War II, about the army and navy and weapons, whatever fascinates him. Another counselor patiently tye-dyed T-shirts -- 18 of them -- with her camper, because that's what he wanted to do.

There have been lots of waving arms, lots of wandering off (closely followed by a counselor), a few meltdowns, quite a bit of anxiety, but also, so much laughter. So many smiles. So much love. 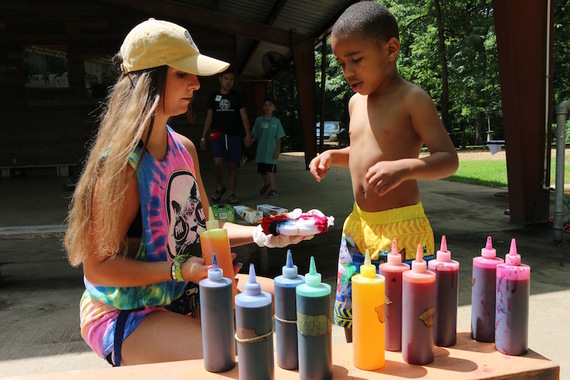 Being part of Camp Able this week reminds me that, in the words of Canadian songwriter Bruce Cockburn, "around every evil, there gathers love. Bombs aren't the only thing that falls from above."

Back home, I know people are grieving, not to mention blaming, arguing, pointing fingers, analyzing, and seeking needed solutions. If I were there, that's what I'd be doing. But here, this week, we're entirely focused on some kids with diverse abilities. I'm watching caring young adults seeking to shower their campers with love, to celebrate their dignity, to fill their emotional tanks with affirmation and joy. We're seeking to make this little corner of the world bright and safe and holy ... and praying that more people will do the same everywhere.

Author, 'A New Kind of Christianity' and 'The Great Spiritual Migration'