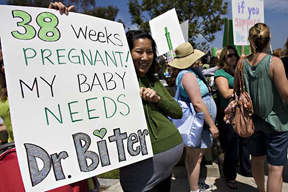 Recently, my two kids and I stood alongside dozens of pregnant women, actress/activist Ricki Lake and hundreds of others to protest Scripps Encinitas Hospital. Some of the women holding up "Bring Back Dr. Biter" signs were so far along, they looked like they might give birth right there on the sidewalk.

What doctor could bring a woman forty-weeks pregnant to stand on a street corner, holding up a sign for hours in the baking Southern California sun? There's only one I know of who could inspire such loyalty. His name is Robert Biter, but around here, he has been dubbed Dr. Wonderful. 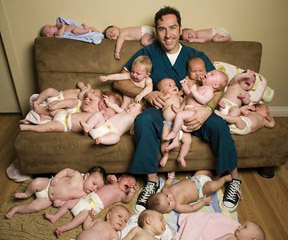 Even before Dr. Biter, an OB-GYN here in San Diego, had his privileges to practice medicine at Scripps suspended, people were talking about him. Talking about how he truly cares about his patients as if they were family, and about the trust he has in a woman's body to do what it was made to do. Dr. Biter's cesarean section rate is rumored to be a low five to seven percent, compared to the nationally rising rate of 31.8 percent in 2007, though California doesn't publicly report cesarean rates for individual doctors. And when his patients do need surgical intervention, he has been known to say, "We're not just having a cesarean, we're going to have a birth." His Facebook fan page has over a thousand members, and the blogosphere is filled with stories and warmly lit pictures of Dr. Biter lovingly guiding babies into the world.

The reasons for Dr. Biter's suspension from Scripps have never been made public, but we know it wasn't prompted by a patient complaint, and the California Medical Board reports that there are no disciplinary actions against him. Of course, a hospital can suspend a doctor for something as insignificant as not filling out the right paperwork. But Dr. Biter's insistence on protecting a woman's right to labor in whatever way she chooses is in direct contradiction to the way most hospitals do business in this country. Those of us committed to this vision are suspicious and distressed that our biggest advocate has now, with no warning, been told he has nowhere to deliver.

My own story with Dr. Biter began shortly after the birth of my first child almost four years ago. I'd planned to give birth to her at The University of California-San Diego (UCSD)'s Birth Center with a midwife. But due to complications, we ended up in the labor and delivery wing of their hospital, a teaching institution, attended by a midwife and several residents. During the birth a resident was called in to perform an emergency episiotomy on me. Her cut was way off the mark and never healed properly.

That's when I found Dr. Biter. He was recommended to me by one of the UCSD midwives as a "midwife's doctor." I was soon to find out why.

I had to endure three procedures to bring my body back to "normal." Each time I would spend eight hours a day sitting on a surgical site while trying to get the hang of nursing, tears of frustration mingling with those of exhaustion and pain. But through it all, this man was at our disposal -- always compassionate and caring. He even gave us his cell phone number, and I didn't hesitate to use it.

I called him late one Friday afternoon, nervous that the latest wound had not healed, and he told me to come on by. Held up by a hungry infant and traffic, when I finally got there, I found him sitting in a darkened office, his staff long since gone. My gratitude almost turned to tears when he assured me that this time things were looking great.

When the hospital's lawyer sent me a letter saying they weren't responsible for my injury because my body was somehow abnormal (which it is not), Dr. Biter was furious.

I let his healing words wash over me. This time, I didn't even bother to hold onto the tears that heated up behind my eyes.

Our experience with Dr. Biter during my second pregnancy and birth was equally empowering. At prenatal visits, he always kept me completely informed, answering questions and discussing everything I could think of, sometimes for an hour at a time.

During the birth, I remember reaching transition and feeling like nothing would be able to lessen the intensity. Dr. Biter put his finger on my third eye and got me to look at him. "Come back to me," he said. "You just have to get through this next one, that's it." He let me take my time in labor, never pressuring me to change or do anything other than what felt right. Thus, I was able to tune into my own body's wisdom which shot me, like an arrow aflame, towards my goal. When I was finally ready to push, he took an authoritative tone that was so different from the past, I took note. "Listen very carefully," he said. "I'm going to use some oil to make sure your body is ready for the baby to come out. Go ahead and push when you feel ready, but when I say to stop, you stop. You're not going to want to, but it's what you have to do."
We'd come that far together and I was ready to listen to his instructions, even through my haze of pain. Soon after, I began to push on my hands and knees. His hands were in such a place that I know he could only feel and not see what he was doing, but he was still able to guide my baby out without one single tear to my body.

After the birth, Dr. Biter congratulated me for "climbing your Everest," and told me, "You had the birth you truly deserved." I know he hoped this labor would undo the trauma of the last, and I'm finding that it really did.

On Friday, May 21st, Dr. Biter was finally reinstated at Scripps Encinitas and promptly resigned. Neither the hospital nor Dr. Biter has made a public statement since then. But every day that he is shut out of the medical establishment, another woman has to abandon her birth plan. I believe that this man will one day be known for helping to change the face of birth in this country, to help the medical community see birth for what it is: a normal, healthy process.

But in the short run, there will be scores of women who will lose out if they can't labor with Dr. Biter. These women may enter a hospital only to have their powerful inner voice taken away when they are told to question what they know about their own bodies. They may be forced to lie down when they know they can labor better on their knees. They may be advised to take pain medication even if they are doing fine without it because "it's gonna get a lot worse." They may be scared into opting for interventions they don't need because these routine interventions can make labor easier on everyone present. Everyone, that is, except a mother and her baby.

For their sakes, I'll do my best to support Dr. Biter in whatever his next step might be. I'll do this for Dr. Biter's patients, for a woman's rights to choose the type of birth and birth attendant that's best for her and because I know, without a doubt, that he would do the same for me.