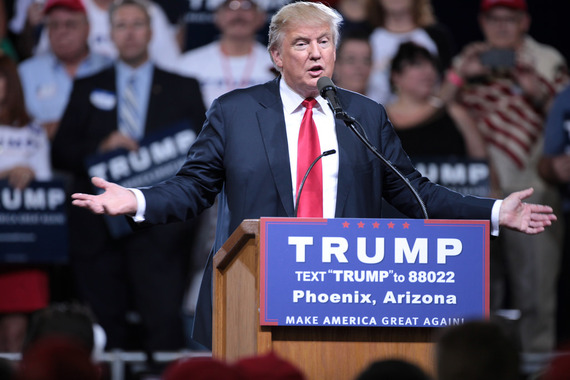 This Thursday thousands of (mostly) American political scientists will descend upon Philadelphia for the annual meeting of the American Political Science Association (APSA). A plurality, if not a majority, of those scholars works exclusively on American politics. While the rise of Donald Trump will undoubtedly be heatedly debated in the hallways and panels, only a few papers are actually devoted to explaining the most important development in U.S. politics this year. This (again) begs the question: why is American political science blind on the right eye?

Three of the most discussed political phenomena in American politics this century are of a radical right nature: neoconservatism, the Tea Party, and Trump(ism). All three developments took U.S. political scientists by surprise and the discipline is still struggling with finding a convincing and comprehensive explanation for them -- I could also include far right terrorism, which is considered to be "the most severe threat of political violence" by US law enforcement agencies, but is hardly studied by U.S. political scientists. To be fair, while the situation is not much better with regard to the radical left, Bernie Sanders, Black Lives Matter and particularly Occupy Wall Street have drawn much more interest from American political scientists (while they are much less relevant to American politics).

In 2008 I set out to write a review article on the political science literature on neoconservatism for the Journal of Politics. It was a response to the received wisdom that "neoconservatives" had dominated the Bush administration, most notably in pushing through the Iraq invasion. But while this alleged neoconservative influence was noted in many academic accounts, I was unable to find any political science study of neoconservatism. In the end, I had to broaden my review article to also include conservatism in general and rely almost exclusively on books by conservative activists and historians. Even today the main book on the U.S. neoconservative movement is written by a French bureaucrat, and previous think tanker, Justin Vaïsse, and was translated from French!

Similarly, the rise of the Tea Party movement took the discipline by total surprise. This was even more surprising as the previous major right-wing social movement, the Christian Right, had been the subject of study of American political scientists, including some prominent scholars like Mark J. Rozell and Clyde Wilcox. And while the Tea Party movement did inspire some original scholarship, including from prominent scholars like Theda Skocpol, its lessons seem to have been quickly forgotten, as they (and the Tea Party movement in general) hardly feature in the discussion of the third right-wing surprise: the rise of Donald Trump.

The rise of Donald Trump took almost everyone by surprise, and I was no exception. That said, I was more surprised by the rise of Trump than of Trumpism. After all, radical right politics have a long history in the U.S., dating at least back to the nativist Know Nothings of the mid-19th century, and recent developments, including the Tea Party and the right turn of the GOP, had awakened fires that the vast network of right-wing media were happy to stoke with more fuel. But as journalists looked for political scientists to explain the "Trump phenomenon" they found few scholars of the U.S. radical right and instead turned to those of the European radical right.

Only in the past months, a year after Trump declared that he was running for president and more than half a year after he started to dominate the GOP primaries, are we seeing an increasingly lively debate on the reasons for Trump's success among American political scientists -- importantly, this debate is largely taking place in the media. Still, little of the research is rooted in the study of the U.S. radical right. Most is a reflection of well-established fields of study, i.e. on authoritarian personalities, "losers of modernization", or racial prejudice.

How can scholars of American politics time and again be taken by surprise by the rise of radical right movements? Moreover, why do scholars of American politics ignore the radical right, while those of European politics obsess over it? There is no doubt that the specific two-party system in the U.S. plays a role -- there are no clear radical right parties like the French National Front (FN) or the Dutch Party for Freedom (PVV) to be studied. In fact, even the United Kingdom, which also has a two-party system, has some (more or less) radical right parties, like the British National Party (BNP) and the United Kingdom Independence Party (UKIP), that contest elections and have been studied in detail. But this is only part of the story.

At the (meta)theoretical level Rational Choice Theory (RCT) dominates much of the research, which (very simply stated) assumes that all politics is driven by individuals who are exclusively driven by economic self-interest. In this highly sanitized and simplistic world, ideologies and identities are secondary at best, and irrelevant at worst. In fact, politics as a whole is often reduced to a "logical" consequence of economic and sociological developments -- in more academic terms, the focus is exclusively on the demand-side of (electoral) politics, while the supply-side is ignored.

At the methodological level, statistical methods are the gold standard, and the more advanced the method, the better the research. This has made the study of American politics, in particular, extremely data-driven. But data suitable for complex statistical analyses have at least two fundamental problems. First, they simplify the complex social and political world -- think about one of the most used datasets of political regimes, by Freedom House, which has just three categories: free, partly free, and not free. Second, most elaborate datasets are only developed after a phenomenon becomes politically relevant, and hence significant funding can be secured. This means that quantitative political scientists are often many years behind the curve.

Perhaps the rise of Trump will finally lead to some critical introspection and, wishful thinking, structural change within U.S. political science in general, and the study of American politics in particular. It has already led scholars to draw upon examples of European politics, most notably Silvio Berlusconi and Marine Le Pen. It has also led to critical reflections on dominant thesis within the study of American politics, such as the crucial importance of money (Citizens United) or "the party" in U.S. politics. Still, without a more methodologically and theoretically pluralistic approach, as well as a more comparative perspective, U.S. political science will continue to struggle to anticipate and explain key developments in U.S. politics.

(In a next post I will highlight the few important studies of the U.S. radical right that can help better understand the rise of Trump and, particularly, Trumpism.)