Last week I wrote about CBS's decision to air an anti-abortion commercial from the evangelical political organization Focus on the Family during this year's Super Bowl broadcast on February 7th.

The commercial will reportedly feature Florida Gators quarterback Tim Tebow's mother, Pam, talking about how her "personal faith" convinced her to carry her son to term, against medical advice to terminate the pregnancy, while she and her husband were missionaries in the Philippines.

By accepting it, CBS inexplicably reversed its long-held and inflexible policy banning "advocacy" commercials on the network, particularly during sporting events.

In 2004, CBS famously rejected a commercial from the United Church of Christ, citing a solid policy against running any advertising that

"touches on and/or takes a position on one side of a current controversial issue."

The UCC commercial's message was "inclusiveness," and featured a gay couple attempting to enter a house of worship but being turned away by a bouncer. The "controversial" tagline of the ad was "Jesus Didn't Turn People Away. Neither Do We," a sentiment supported by every Gospel of the New Testament.

The tagline of the Focus on the Family ad is reportedly "Celebrate Family, Celebrate Life," a perky, wholesome slogan that neatly doubles as coded rallying cry for the rabid, occasionally violent anti-choice movement.

The response from the United Church of Christ was swift and to the point. On their website, they addressed the situation by noting that

"[w]hile CBS is reportedly saying that a bad economy now necessitates changes in its policy on so-called advocacy ads, this decision only underscores the arbitrary way the networks approach these decisions and the result is a woeful lack of religious diversity in our nation's media," says the Rev. J. Bennett Guess, the UCC's director of communications. "Because of its own economic circumstances, CBS is affording time to one religious organization while having suppressed another. This sounds as if the broadcasters think they own the airwaves when, in theory at least, they do not

"CBS's decision to run a Focus on the Family ad during this year's Super Bowl can't and shouldn't be considered in a vacuum. CBS spent years denying a platform to an LGBT-inclusive church that wanted to share a message of inclusion with a national audience. Now, when it happens to be financially inconvenient for CBS to hold to the standard it had previously imposed, the network's expediency benefits a virulently anti-gay organization whose advocacy on these issues is the antithesis of that of the United Church of Christ."

When first challenged on the obvious hypocrisy of accepting one religious organization's commercial while rejecting another, CBS was cooly dismissive, replying that it would not comment on past decisions, an obvious reference to their ban on UCC's inclusiveness commercial.

On Monday, a coalition of women's groups including NOW, the Feminist Majority, and the Women's Media Center, sent a letter of protest to CBS. The letter proposed that

"by offering one of the most coveted advertising spots of the year to an anti-equality, anti-choice, homophobic organization, CBS is aligning itself with a political stance that will damage its reputation, alienate viewers, and discourage consumers from supporting its shows and advertisers."

On Tuesday, CBS spokesman Dana McClintock tepidly offered a statement to the effect that the network had changed its policy towards advocacy advertising.

"We have for some time moderated our approach to advocacy submissions after it became apparent that our stance did not reflect public sentiment or industry norms on the issue."

Given the dire state of the economy, CBS's record-low prices for ad time during the Superbowl, and the indisputable fact that abortion is the most polarizing and divisive hot-button topic in the American popular discourse, it's jejune of CBS to expect anyone to believe that this was some forward-thinking move towards modernity on their part. It clearly comes down to which viewers CBS is prepared to offend and alienate when there's a $2.7 million payoff at stake during a recession.

This will be good news for well-heeled right-wing religious and political groups everywhere.

On Friday, the network rejected a humor-driven commercial from the gay dating site ManCrunch.com, which features two apparently straight men who suddenly begin to make out in the heat of the moment as they celebrate a touchdown on television. The commercial is not pornographic, nor is there nudity. There will be more exposed flesh on the field than there would have been on the screen.

James Hibberd at The Live Feed reports that CBS offered the following explanation in a letter to the ManCrunch.com:

[T]he creative is not within the Network's Broadcast Standards for Super Bowl Sunday.

"After reviewing the ad--which is entirely commercial in nature--our Standards and Practices department decided not to accept this particular spot."

According to spokeswoman Elissa Butcher, the commercial cost $100,000 to produce, and the company is

"100% serious. We have the money to pay for it. If the ad showed a man and woman kissing it would have been accepted. You see ads for erectile dysfunction morning, noon and night. It's discriminatory that they wont show this."


In reality, the problem is not with the quality (or not) of the ManCrunch ad. The network's rejection of it merely highlights the obvious: that CBS had already decided where its ethical priorities lay when they accepted the commercial from Focus on the Family last week. Those priorities clearly don't lie with women, or with progressives, or with any group that happens to find itself on Focus on the Family's no-fly list.

The tagline for the Tebow commercial--"Celebrate Family, Celebrate Life"--is particularly ironic, given that Focus on the Family has likely destroyed at least as many families as it's "celebrated" in its relentless pursuit of what amounts to fundamentalist Christian social eugenics at the expense of maintaining existing families through education, acceptance, respect, tolerance, and love.

Furthermore, in late-breaking news, Focus on the Family may have led CBS into even hotter water and courting even more controversy.

Famed attorney Gloria Allred has questioned the veracity of Mrs. Tebow's claim that doctors advised her to terminate her pregnancy, since abortion in the Philippines has been illegal since 1930 and is punishable by a six-year prison term for both the doctor and the mother. Given that, the attorney has grave doubts that doctors would have advised an abortion According to Radar Online, Allred has announced she will file a complaint with the FTC and the FCC if the ad airs "and fails to disclose that abortions were illegal at the time Ms. Tebow made her choice."

It might be time for CBS to stop proposing a specious platform of how up-to-date they've recently become regarding "advocacy ads" and just admit they have a financial stake in courting the Religious Right for advertising dollars. Last year Focus on the Family contributed $727, 250 to help pass Proposition 8 in California at a time when they were making preparations to lay off nearly 20% of their employees, which seems an odd decision for an organization that allegedly "celebrates families."

Either that or admit they're simply afraid of them, afraid of applying the same standards to a powerful, multi-million dollar right-wing religious conglomerate as they've always applied to left-leaning liberal groups, and progressive churches whose message of tolerance and inclusiveness didn't meet their "standards and practices" for primetime. Even if it means running a Super Bowl commercial whose primary purpose is to shame and intimidate women who've made, or might make, the painful decision to terminate a pregnancy, for whatever reason.

In the end, money always talks, no matter how ugly what it says might be.

In CBS's mind, it's clearly more lucrative for them to radically alter their own long-held and strictly-enforced policy, at whatever ethical cost, than to just do the right thing. 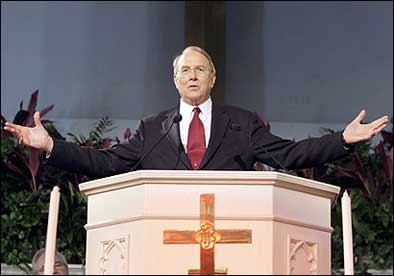