This article first appeared in The National Book Review

There is something going on with George R.R. Martin, the author whose work forms the basis for the HBO series Game of Thrones. Or two things, really. His books are getting longer, and they are coming out even more slowly.

These realities were driven home again earlier this month, when Martin pushed back publication of his next book, The Winds of Winter. It will not be available, he said, before Game of Thones begins airing again this spring.

Writing in his LiveJournal, Martin said a lot of it came down to his being bad with deadlines, though he conceded that his travel schedule, and his blogging, and other things may have also played a role. At least he had the good grace to say of the update: "You won't like it."

Of course, this is in large part readers' fault. Genre fiction does not always sell well, and we want the genre authors we like to be popular. But the question is, when they get the mainstream appeal we crave for them, could it be that it is actually destroying the very stuff that makes the author great and allows him or her to get that attention in the first place?

There certainly seems to be a pattern of genre fiction authors gaining mainstream appeal and then losing control of their craft. Once they win popular acclaim, in many cases their book lengths balloon and their inter-book wait times expand. It may be that they are conflating readers' rabid desire for more of their work (sequels that advance the story) with a burning lust to read more of their words (1,200-page novels).

Martin's writing pace in recent years has been so slow that the hit TV version of his series, which began in 2011, has outpaced his books in content, leaving fans furious that the upcoming spring season will be spoiling unwritten content from the book series.

This dual phenomenon -- books growing, and slowing -- seems to result in large part from an inversion of the normal literary power structure. Most authors have to worry if they miss deadlines -- the publisher could simply kill the book -- and they can be forced to aggressively cut book lengths to fit an editor's preferences. We are not privy to what exactly is going on between Martin and his publisher, but it seems that these basic rules may not apply.

There is no question the books have been coming more slowly as Martin has become more popular. The series' second book was his first to make the New York Times Best Seller list, reaching #13 and coming out a relatively rapid 30 months after book one, A Game of Thrones. Book three hit #12 on the Times list, and came out an even quicker 20 months after.

Book four, originally titled A Dance with Dragons, turned out to be a doozy. Astute readers have noted that the fourth book did not actually bear that title. That is because the book that Martin produced was so far from a reasonable page length that he was actually forced to split it into two separate novels. The first of the two, A Feast for Crows took an astounding 60 months to publish following Storm, and debuted at #1 on the Times list.

A Dance with Dragons, the first book to come out after the popular HBO show, not only debuted at #1 on the Times list, but sold a staggering 298,000 copies in a single day. Unfortunately, it took an even more stunning 68 months to release, an uncommonly long period for a genre fiction series.

The forthcoming book six, The Winds of Winter, appears unlikely to buck this trend. The earliest conceivable release date (given Martin's recent announcement) would be 60 months of waiting for fans, and many people are speculating that the delay will be significantly longer. It is worth noting that after publishing three books between 1996 and 2000, Martin has written only one Thrones novel -- published as two books -- since the Clinton Administration.

Martin, after breaking his most recent date (a date that already would only have been possible due to a publisher willing to drop everything and spend vast sums of money to get out a book in a quarter the normal time, as covered in a fascinating article by TOR) is back to growling at impatient fans "it'll be done when it's done."

The graph below highlights the trajectory of Martin's publication dates. 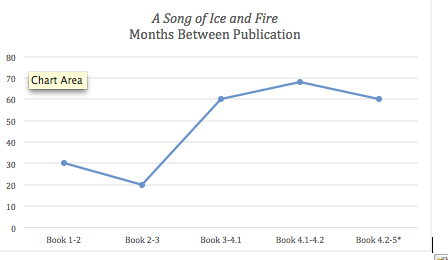 *Book 5 does not have a release date, the date above is the earliest possible date, yet most expect a lengthier wait.

As seen below, George RR Martin's books have also increased in length over time 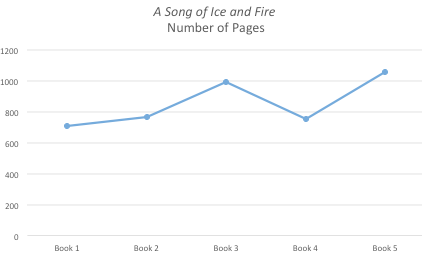 The above graph is actually somewhat misleading, however, because in terms of publications plans and series plot advancement, books four and five are actually one single novel (chronologically they cover the same period but focus on different parts of Martin's world). They were split due to book-binding issues -- hardcovers can't be printed much above 1,000 pages, and the combined 1,809 pager was considered "unpublishable."

The true trend in terms of page length is better reflected in this revised second graph. 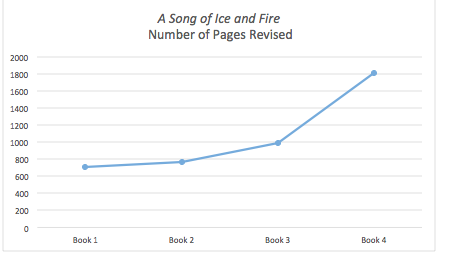 What can be learned from Martin's struggles? He has not spoken with great affection of the role of the book editor. Ideally, he has said, an editor "offers you decent advances, and goes to bat with his publisher to make sure your book gets promoted, and returns your phone calls, and answers your letters," but does not try to "change the book into something else entirely . . . doesn't insist, or make changes without permission."

If Martin is getting this type of editor, many of his fans might wish that he was, instead, getting an editor who did insist on things like manuscript deadlines, to allow for timely publication; one who forced some changes on the author, to allow reasonable amounts of plot movement per hundred pages.

Perhaps if fans were not waiting five years between books they would not care as much -- but they are, and they do. It is not hard to imagine that the slowing is due in part to the sort of life a celebrity author lives -- cast parties to attend for the hit TV show, a whole world to travel and a massive fortune with which to do it. (And in Martin's case, there are also football games to watch and discuss -- unfortunately the one topic Martin seems able to write about in a timely manner.) In his LiveJournal post, Martin allowed that his "travels" and "other projects" and "blog posts" might be part of the explanation for the delay of his upcoming book.

As for length, it may just be that now Martin is free to write as long as he wants -- however infuriating that may be for readers.

Which is, of course, the heart of the problem. We love his books despite all of this, and with our adoration we give him this power. That doesn't mean, however, that we have to be happy with how he uses it.

This is the first in a series of articles about this topic.