"You were born original. Do not die a copy". -- John Mason

Now, if all five fingers were of an egalitarian nature, how would a layman possibly distinguish between all of them? Many a times, a lot of people are trying to fit in and submerge themselves in a herd just like a liquid would seep into an existing water body. Have you ever wondered what would it be like when you are half a century old and still sedulously caught up in the usual rigmarole of something called "Life"? One undeniably questions oneself and looks back upon how he could have done certain things differently personally or professionally. This is not suggestive of creating banter of any sort or notoriously exhibiting yourself. In a noisy world, where everybody seems to be shouting their lungs out from their rooftops, it is important for your ideas to stand out from the crowd.

However, what we are spotting the light on is that had you chosen to be significantly conspicuous or deciphered to make a difference in some way or the other, it could have opened up a world of opportunities that is hard to envision at this point. So the question lies on the fact that why gray your hair or wrinkle your skin and live a life of self-condemnation? Imagine sitting on that old couch, gawking outside that window reminiscing your past and living a life of penitence.

Interestingly enough the word, "Inborn Talent" is often misconstrued. I vehemently believe that each of us come into existence with the same level of luminosity. How one differentiates from the other is, how one sets oneself apart and treats the world as his oyster by grabbing every opportunity that comes his way. A few privileged ones born with a golden spoon might have the world at their disposal but still fail to seize and take advantage of iron in the fire, barring a few exceptions. 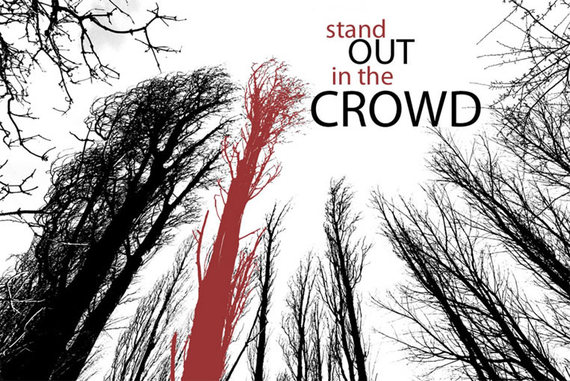 Sheryl Sandberg clearly advocates, "To stand out, lean in and be willing to stand up for something that is really important to you and to others." With that being said, irrespective of where one comes from or is born into, the truth is that to live a life of contentment, it is important to make a mark for yourself, stand up on your on feet and appreciate smaller things in life. One must continue to do so tirelessly instead of resting upon past laurels or raving about something that they might have done before and have failed to move beyond it.

After India-Pakistan partition, my father moved to Munich in the 1960's with $5 in his pocket and not a soul to look upon. Academically, he had always been sub-average, was more inclined towards sports and had a penchant for starting a business at the drop of a hat. Although, he made his first fortune at the age of 18, he relentlessly continued to strive hard towards anything he laid his hands upon and continues to do so. Whilst in Munich, there were a gazillion people from all walks of life looking for a job at that time. With demand being more than supply, it was important to have an edge over others to scale upon the over-exhausting job market. How he ensured to stand apart from the rest was by being linguistically acquainted with the local language and willingly accept any job that came his way which took him to the extent of affording to live in the best address of Munich. Had he chosen to be a just another run-off-the-mill or been egoistically picky about what job to pick, he would have packed his bags in no time and bided aufweidhezen to Deutschland.

In today's day and age of neo-materialism, the zest and zeal to give up mere temporary pleasures to attain something of a certain stature seems plausible. Thomas Jefferson rightly quoted, " If you want something you've never had, you must be willing to do something you've never done." It is mandatory to quit blending in yourself or acclimatizing with the rest of the world in order to stand apart from the rest. But the key question lies in, how does one make that solid lasting impression yet a noticeable one? Firstly, it's all about one's attitude and how one perceives oneself. You are what you think of yourself. Coming up with new-fangled ideas, immersing yourself in all things latest might seem like the probable choice of doing something right. But all this is futile, if you are not noticed and in order to create that massive impression, one needs to stand out from the rest and put oneself out there. It is essential to create brand YOU, else you shall remain brand NEW.

Recently, I happen to stumble upon Marie Forleo's website where she earnestly believes "I coined the term multi- passionate entrepreneur because like you I don't fit into a conventional box". As clichéd as it sounds, it is essential to create a life you love and one of the ways to do so is by doing things differently and having that visible distinguishing mark. It is key to understand that a comfort zone is a beautiful place but nothing ever grows there.

According to a recent article published in the Guardian, a nurse asked certain patients who were close to their expiry date that what did they regret the most in their lifetime. Interestingly enough, one of the top five responses was that each of them wished that they had the courage to live a life true to themselves, not the life others expected of them.

Life is what you make of it considering each one of us comes into this world with an equal opportune. Identifying a "Breakthrough Idea" and working unremittingly towards it will not only help to carve a niche for yourself but will also equip you with tools that are essential to create that distinguishing mark.