I often hear that "Israel is the only democracy in the Middle East." It is "an island of Western values in a region where religious fundamentalist governments shun civil liberties and gender equality." This is all true, but unfortunately, when it comes to freedom of marriage, Israel does not yet exude pride for embodying these core principles. Instead, its policies more closely resemble those of its neighbors.

Sara and Tzachi posted their story on Facebook this week, frustrated over the realization that their -- our -- country, Israel, is depriving them of the right to marry each other. Sara was adopted at age 1 by an American Jewish family. They converted her to Judaism in their Conservative congregation. (Of note is that some 70 percent of American Jews identify with the non-Orthodox denominations.) She grew up Jewish and eventually visited Israel and decided to make aliyah and become an Israeli citizen. Sara and her fiancé, a native Israeli Jew, just learned that they cannot get married in Israel for one reason only: The Israeli Orthodox rabbinate does not consider Sara Jewish because of her Conservative conversion.

So you naturally ask yourself: Why don't they marry with a Conservative rabbi?

The answer is simple, disturbing and unacceptable: Israel only recognizes Orthodox rabbinic authorities when it comes to marriage. No Reform, Conservative or Reconstructionist rabbi has the right to officiate at weddings. Israel also does not allow civil marriages for anyone, Jews and non-Jews alike. Sara is but one example of the hundreds of thousands of Israeli citizens who are denied the basic civil and human right of marriage, and the millions more who are denied the right to celebrated their marriage in a way befitting their life and beliefs.

Such stories are numerous in Israel. As a rabbi and lawyer, I have been advocating for religious freedom and equality for more than 40 years in the courts and in the public square, as well as in the corridors of government. A few years ago, we founded an Israel-Diaspora partnership, Hiddush, offering a non-partisan and non-denominational avenue to advocate for "freedom of religion and conscience" and "full social and political equality regardless of religion," as promised by Israel's Declaration of Independence.

Sara and Tzachi's plight can now be seen in a global perspective. The new and innovative Freedom of Marriage World Map we just launched gauges freedom of marriage in 194 countries around the world. We initially wanted to see how Israel's marriage policies compare to the rest of the world. After further review, we were surprised to find that there was no such comparative document in existence. Then the idea for the interactive map was born.

My country, Israel, is sadly the only democracy in the world that severely restricts its citizens' right to marry. It places Israel alongside its neighboring Arab countries and two-thirds of the Islamic world. Not quite where Israel should like to be seen. This harsh reality, demonstrated by the map, should be seen as a wakeup call for Israelis and Jews around the world to bring freedom of marriage to Israel.

The results of our research show a split globe. While almost half (48 percent) of the world's governments guarantee freedom of marriage (Grade 2), there are 45 countries that impose severe restrictions on marriage (Grade 0) and 56 countries with partial restrictions (Grade 1). No democracy, other than Israel, severely restricts the right to marry.

Freedom of marriage is a critical issue for anyone who is concerned about civil liberties. In Israel it adversely affects Jew and Arab, secular, Reform and Orthodox, men and women.

As a result of Israel's policy regarding marriage, many couples choose to leave the country to get married civilly. In 2010, 16 percent of all Israeli marriages were conducted abroad. There is also a 250 percent rise in the last 10 years of Jewish couples who cohabit without marriage. Many do so because they refuse to submit to religious coercion, and know that even if they marry civilly overseas -- they would still be under the jurisdiction of the Orthodox rabbinate if they seek divorce.

Freedom of marriage is an issue of global Jewish concern, especially for American Jewry. Some two-thirds of the next generation of American Jews are descendants of converts to Judaism or intermarried couples. As long as the current Orthodox control over personal status persists, none of them will have the legal right to marry in Israel. This clearly shows that the supposed resolution to the "Who is a Jew" battle stopped short of ensuring the Jews by Choice, like Sara, the dignity and the right to marry. For Sara's sake and the many like her, this cannot be allowed. Israel, today, is essentially telling the majority of the next generation of American Jewry: You are not Jewish, or not Jewish-enough! This is hardly a recipe for strengthening future bonds between the American Jewish community and the State of Israel.

It is encouraging to me that the clear majority of Israelis support freedom of marriage and would recognize Reform and Conservative conversions as valid. Unfortunately, Israel's politicians have surrendered this area of civil rights and human dignity to the ultra-Orthodox monopoly. It is a detriment to Israel, World Jewry, democracy and gender equality. Needless to say, the current state Israel's marriage and divorce laws are also in stark contradiction to key articles of international human rights, such as the Universal Declaration of Human Rights and the International Covenant on Civil and Political Rights.

The dividing line is not between Orthodox and non-Orthodox, rather between those who believe Israel's core identity as a "Jewish and democratic state" is a complimentary and reconcilable dynamic and those who aspire to make Israel a Jewish theocracy. The demand for change, therefore, is not limited to secular and non-Orthodox circles. There is growing support from modern Orthodox advocates to introduce civil marriage and divorce in Israel. Support for the critical move toward freedom of marriage in Israel is also gaining ground among major Jewish organizations in America such as the American Jewish Committee and the National Council of Jewish Women. Hiddush is working to encourage more collaboration both in Israel and among World Jewry toward this goal.

My hope is that the Freedom of Marriage Map will assist in raising consciousness and support for freedom of marriage in Israel and throughout the world. Israel must not remain, in this regard, in the same category as its fundamentalist Arab neighbors. A clear majority of the Israeli public supports this direction. The recent Knesset elections created a historic opportunity for religious freedom and equality in Israel. We cannot afford to miss it.

Why Is It so Difficult for Jews to Marry in Israel?
Married In Israel 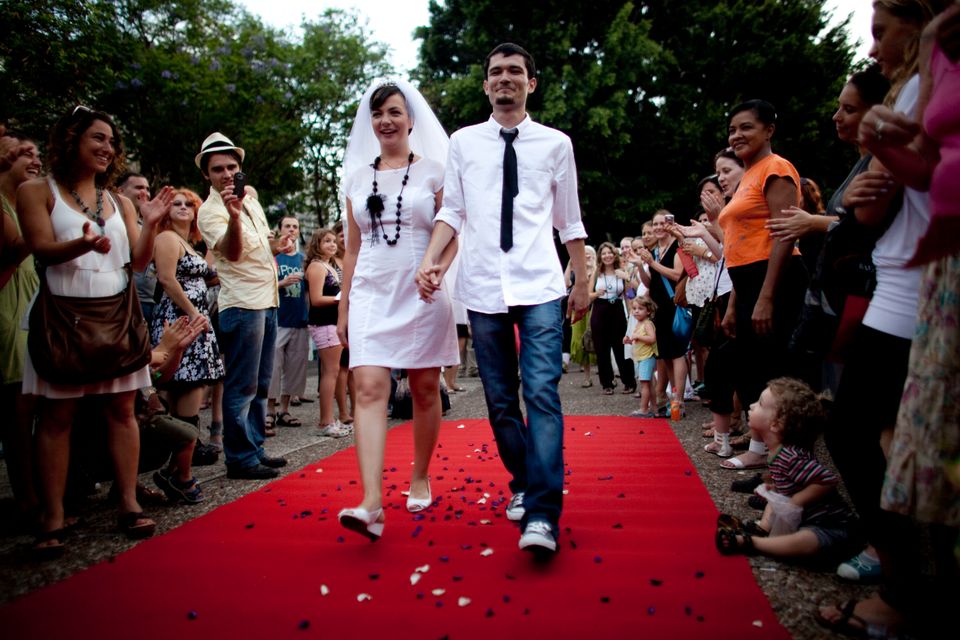 1 / 13
Jewish Couple Marry During Alternative Ceremony
TEL AVIV, ISRAEL - JULY 25: (ISRAEL OUT) Bride Yulia Tagil and grome Stas Granin during their alternative wedding ceremony, on July 25, 2010 at a square in Tel Aviv, Israel. Tagil and her husband, Stas Granin, held the public wedding to protest the Jewish guidelines stating that the only way for Jews to marry by law is through the standards set by the Chief Rabbinate. (Photo by Uriel Sinai/Getty Images)
Getty Images