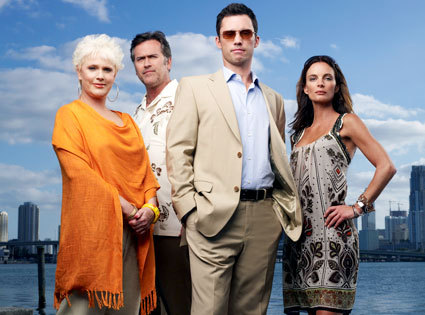 Not since a certain pastel-tinted cop show from the 80s has Miami looked better on TV than in the popular series Burn Notice. The show, about a very cool spy left "out in the heat" in his hometown after being cut loose by the government, has been a huge success for the NBC Universal-owned USA network and a huge boon to the city of Miami. Unlike other recent shows that have had storylines based in Miami, Burn Notice is shot almost exclusively on location, which means that the backdrop on display has the look and feel of Miami because it is Miami. The city, which has been my home for 43 years, plays a pivotal role in the show to the point of actually becoming a character; anyone who lives here will tell you that Miami is a unique and exciting place, one that lends itself to stylish and dangerous drama, and isn't the kind of setting that can be recreated anywhere else. And yet, that's exactly what the political leaders who run the city of Miami seem to be trying to get the cast and crew of Burn Notice to do: go somewhere else.

City of Miami Commission Vice Chairman Marc Sarnoff is moving forward with plans to tear down the Coconut Grove Expo Center, which has been the primary shooting site for Burn Notice for the past six years, to make room for new public space. What this will mean is the end of Burn Notice in Miami. The producers of the show have already guaranteed that should the Expo Center be razed, they'll have no choice but to pull production from the area, while Sarnoff and the commission -- who simply don't understand how the entertainment business works -- are clinging to the ridiculous hope that the entire production will simply pick up and move to another location in Miami, one that's nowhere near ready to host a national television show with the needs of Burn Notice.

So what you've got, essentially, is a bunch of short-sighted politicians driving out a production that's not simply bringing jobs and revenue to a town that could always use and desperately needs both, but the eyeballs of a national audience that almost certainly translate into tourist dollars. Add to that the fact that Miami has been adept so far at positioning itself as the Hollywood of the south, with locations, an overall hipness and financial considerations that make it an optimum place for TV and film productions, and you've got a decision from on high that just boggles the mind. Pushing away the production of a popular television show -- even risking pushing that production away -- is beyond bone-headed and clueless. It's incompetence of the highest order -- and it makes Miami look dumb and amateurish in the eyes of people willing to spend millions of dollars here.

Lest anyone think that the brains behind Burn Notice are making unnecessary demands on the city of Miami, producer Terry Miller hasn't simply been sympathetic to the needs of city leaders, he's been downright obsequious. Miller has listened to the city's concerns and those of the residents of Coconut Grove, who apparently want to see a park eventually built on the Expo Center site, and has scouted other potential locations in Miami -- including the one suggested by Sarnoff -- but has found that nothing has what the show needs to continue production. And that production, on a potential seventh season, will start in just a couple of months. In other words, not only is the city throwing a monkey wrench into the plans of the hit show, it's doing it -- seemingly out of spite or stupidity -- at a time when the show's production team can least afford to have to deal with this kind of migraine headache. Miller has offered to pay even more money for the lease on the Expo Center; the city still won't budge. That's just staggeringly senseless obstinacy.

As an entertainment attorney and a member of the Miami-Dade County Film & Entertainment Advisory Board, I've dedicated myself to doing whatever is necessary within reason to keep the red carpet rolled out for TV and film production in Miami. I understand what these productions mean for South Florida and what their presence here means for building both Miami's reputation as place that's friendly to the entertainment industry and Miami's status as a cosmopolitan hub across the country and around the world. But this is far more than just a Miami story. It's a case of a city's myopic leaders standing in the way of the greater good both financially and culturally, and it could happen anywhere in the country. When Hollywood dollars are on the line, provided the production isn't so intrusive as to be an unacceptable nuisance to citizens, you make concessions because the end result is so beneficial to the city as a whole. It creates revenue and when people see their town represented in such fantastic fashion on TV or on the big screen, it instills civic pride. Burn Notice, put simply, makes Miami look good. And the production has been nothing but ingratiating to the city and its desires. The show's producers love Miami. They love shooting here and being here.

To send them packing because of backward city politics -- in the show's vernacular, to "burn" them -- wouldn't just be an embarrassment to Miami. It would be a travesty and an injustice -- one I'm not sure even the resourceful Michael Westen could help us overcome.