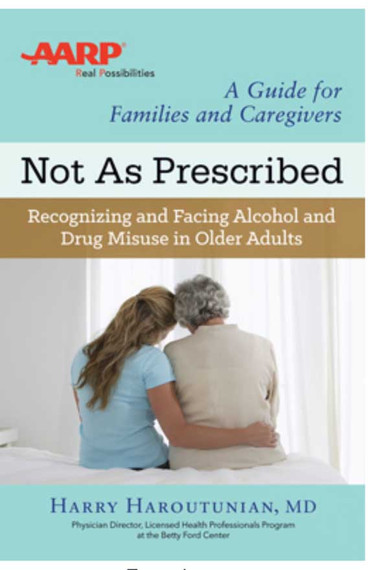 Are you or an older adult in your life suffering from misuse of drugs? It is an increasingly common problem says a new book by Harry Haroutunian, MD because people are taking more drugs than ever before and not always aware of their side effects and interactions. This "polypharmacy" can produce everything from falls and accidents to behavior that is quickly termed "dementia" in the elderly though it might well be from drug effects. The problem is compounded by doctors not always aware of what other doctors are prescribing a patient and the addictive nature of many widely prescribed drugs. Dr. Haroutunian physician director of the Licensed Health Professionals Program at the Betty Ford Center, has written a book addressing these issues called "Not as Prescribed--Recognizing and Facing Alcohol and Drug Misuse in Older Adults."

Martha Rosenberg: Your book discusses ageism that can lurk behind medical treatment of the elderly--the belief that a person does not have long to live, cannot live a quality life or even that the elderly should be allowed to have "their comfort" when it comes to drugs like opioids or benzodiazapines.

Dr. Haroutunian: People can do extraordinary things in the 90s. I have a colleague at the Betty Ford Center who has written two books about recovery and speaks in prisons about recovery and addiction at the age of 95. The later years can be more fulfilling than anything before them. I have seen my patients blossom when taken off harmful drugs and drug combinations. If "mom" doesn't remember that you visited yesterday or that you rushed over to check on her because her phone went dead, she may not have declining memory issues at all--she may be suffering from drug side effects.

Martha Rosenberg: In your book, you recommend a medical audit in which all the drugs a person is taking are put in a paper bag and brought to their primary doctor.

Dr. Haroutunian: Yes and that includes over-the-counter drugs like Tylenol PM, Advil PM, Nyquil and anti-diarrheals which can also cause confusion, memory loss, dry mouth and falls. Every time I go to my cardiologist, he does a medical reconciliation of all the drugs I am taking. If your older adult's doctor is not doing that, find a new doctor.

Dr. Haroutunian: Not unless the doctors are in the same health care system. HIPAA laws would not allow that information to be shared.

Martha Rosenberg: The biggest problem with drug addiction is denial and you say in your book the family can also be in denial.

Dr. Haroutunian: Yes. When it comes to family members, denial can take the form of "not my mother," "but these are prescription drugs," and "this can't be addiction." Remember, for the pre-WWII generation, there was huge shame and stigma around addiction, too.

Martha Rosenberg: Another problem you raise is how to "help" a parent who we are supposed to respect and who once took care of us. It can feel awkward.

Dr. Haroutunian: The key word is "nonconfrontational" and being gentle. You can simply say "let's have a doctor look at all the medications you take" to find out why you are so drowsy or forgetful. The whole family will be pleased and the decision to admit the elderly person to a nursing home can be put off for years.

Martha Rosenberg: You write in your book that drug taking has become "normalized." What do you think about direct-to-consumer advertising?

Dr. Haroutunian: It is horrible. It gives people magical thinking and the idea that any problem can be fixed with a drug and there are no consequences regardless of the list of dangerous side effects. The ads allow the patient to feel "smart" by telling the doctor what he heard on TV, and then the doctor has to be smarter in what he chooses to prescribe.

Martha Rosenberg: It is clear from your book that medications not dementia or cognitive problems may be causing many of the symptoms we see in the elderly--even landing them inappropriately in nursing homes. You are also no fan of opioids for chronic pain.

Dr. Haroutunian: If you took a hundred patients who are on chronic pain medication and take them off the medicine and move them through three physical therapy pool exercises a day, a lot of them are going to feel better. The reason is the opioids are usually causing the pain through opioid-induced hyperalgesia. The patients' light-headedness and over-sedation will also disappear and their bowel functions will return to normal. They are wonderful changes to see.

Harry Haroutunian, MD, an internationally known speaker and authority on addiction-oriented topics--including drug misuse among older adults--is widely read online and has appeared on The Dr. Oz Show and Dr. Drew On Call and in the New York Times and Cosmopolitan. Board certified in both addiction and family medicine, he serves as physician director of professional and residential programs at the Betty Ford Center in Rancho Mirage, California.

Martha Rosenberg is an investigative health reporter who contributes to Consumer Reports, Bill Moyers' news site and the Center for Health Journalism. Her food and drug expose Born with a Junk Food Deficiency was featured on CSPAN.