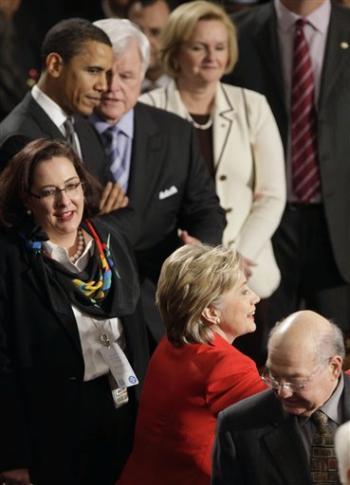 Boy, is NY NOW ticked off.

Sam Stein interviewed Marcia Pappas and she's not backing down one bit. You've seen the photos from last night's State of the Union, taken by AP's Ron Edmonds. It comes down to the matter of disrespect.

But to say that I have a very complicated relationship with NOW is an understatement. As full disclosure, I do not back or give money to NOW, Planned Parenthood or NARAL, though all three groups do more collectively for women than I will in a lifetime. I just find their militancy often very strident, with their expectations of Democratic candidates to genuflect to their agenda counterproductive.

As for NOW alone, I recall when I was 19, about to be 20, and I was at the Miss America Pageant. Coming out of my hotel one day I was confronted by a NOW spokeswoman and dozens of cameras and media. This was at the height of feminism when the revolt against traditional things women did was at a frenzy. The NOW girl got in my face to scream, "How can you demean yourself like this? You should be ashamed." To which I simply replied, "Do you want to pay for my college tuition?" Then off I walked to my limo, which then whisked me away to a pageant rehearsal. The truth is that without pageant scholarships I couldn't have gone to college; they begat other aid, on which I was completely dependent.

Yesterday, NY NOW came out with an obviously fervent statement that reveals real anger over Senator Kennedy's endorsement of Barack Obama. It is more screed than press release. The passion is unmistakable. I will let you judge it for yourself.

"Women have just experienced the ultimate betrayal. Senator Kennedy's endorsement of Hillary Clinton's opponent in the Democratic presidential primary campaign has really hit women hard. Women have forgiven Kennedy, stuck up for him, stood by him, hushed the fact that he was late in his support of Title IX, the ERA, the Family Leave and Medical Act to name a few. Women have buried their anger that his support for the compromises in No Child Left Behind and the Medicare bogus drug benefit brought us the passage of these flawed bills. We have thanked him for his ardent support of many civil rights bills, BUT women are always waiting in the wings.

"And now the greatest betrayal! We are repaid with his abandonment! He's picked the new guy over us. He's joined the list of progressive white men who can't or won't handle the prospect of a woman president who is Hillary Clinton (they will of course say they support a woman president, just not "this" one). ... ..

I will say one thing about all this talk about Hillary Clinton being cast as "the past," which Kennedy did just today, and Obama does every day. As much as I respect Senator Kennedy, and I do to the foundation of his political passions and his legislative record, it's an insult of monumental proportions to all women to suggest that Hillary Clinton comes out of the past and represents something old.

If Barack Obama was a woman he wouldn't be getting the time of day. His young, new generational theme, if offered by a woman of similar age and inexperience, would be judged as almost cute.

It's taken a woman, Hillary Clinton, 35 years to get in the position to run for president, because anything less from a girl would be judged as insufficient for the position. Is there another woman in sight who could do it other than Clinton? Anywhere? The bar for women is higher, with experience and a real foundation of proof of worthiness a mandate for higher leadership, which can only be accumulated through effort and the passage of time. For commander in chief it gets even more difficult.

But by virtue of being a man, Barack Obama leaps across the experience threshold through his new generational change theme alone.

Any wonder why NY NOW is miffed?

I'm hearing from a lot of women (and men too, for that matter) who, as much as they respect and admire Teddy Kennedy, feel the same way.

What accomplishments put Barack Obama's "change" and "hope" agenda, not to mention his "let's make a deal" non-ideological style, above the years Hillary Clinton has dedicated to policies, change and her large substance advantage that has been proven in debate after debate? Flash can certainly top substance in the emotional arena of tapping into a voter's heart, but it certainly should have nothing to do with the person of experience being associated with "the past," when those years were required and have made the person in question more capable of doing the job.

No woman with Obama's credentials could possibly get the endorsement of Kennedy, Kerry, McCaskill, Leahy, et al, let alone the newspaper nods, because her very youth and inexperience would preclude the woman ascending to the same spot without more years under her belt.

Enter Hillary Clinton, with those years required by our society, and Kennedy and others are calling her the politics of the past. If so, then just when will a woman rise to meet the criteria? Talk about a leadership catch 22.

It took one woman working day after day over decades, plus having the connections of her husband, to get in the spot where she can have the opportunity to run for president, doing so in the midst of incredible odds, the worst press coverage ever, while everyone has decided to adorn the young man with little experience as the next possibility, because we have to turn away from the past. Tell that to the National Nurses Organization.

That "past" that Kennedy and others are encouraging people to walk away from is the very foundation on which Clinton has built a lifetime of service to prove she has the mettle to be president. It's the dues a woman must pay to get the chance to lead, because those dues are required of her. A standard to which her lesser accomplished male opponent is not being held.

No doubt Barack Obama is talented, having a gift of rhetorical flourish that any politician should admire, even covet.

Whereas Hillary Clinton, the woman who could only rise to the position she's now in to finally have an opportunity to compete did so through hard work over a lifetime, because youth alone for her, even if she had the gift of rhetoric, would be judged as insufficiently experienced to be president.

It's likely this tired old resume double standard that brought NY NOW's press release out without an edit. Because the very thing that makes Hillary Clinton qualified to be president is being pushed aside and called "the past." Let's face it, if Clinton was Obama in a dress, er, pantsuit, she wouldn't be getting the time of day, let alone Teddy Kennedy's endorsement.