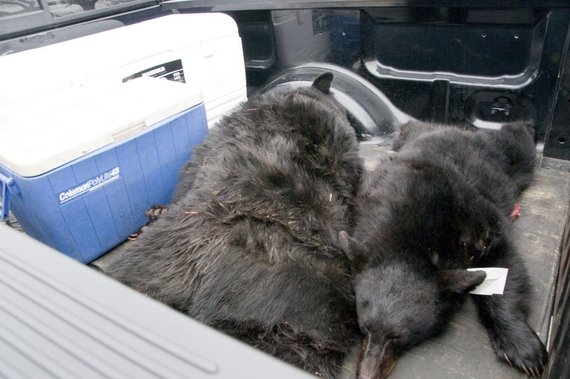 Black bears are again under attack in New Jersey as an expanded hunt is set to start in December. In previous years, the New Jersey bear hunt had been stopped due to public pressure but once Governor Chris Christie came to office, he approved of its reinstatement after a five-year ban. Christie was apparently supported by the New Jersey Outdoor Alliance during his election campaign; the NJOA are a pro-hunting political action committee. When Christie was elected, he appointed the Chairman & co-founder of the NJOA to his Environmental Protection transition team whose job it is to address hunting policy. (Doesn't sound good for the bears so far.) Now, in 2015 this hunt has been greatly expanded and one more week has been added to the timeframe plus an allocation of 11,000 permits.

The most oft used excuse for the need to hunt black bears is the human/bear conflict. Scientific studies have however clearly shown that hunting does not, in fact, reduce the number of human/bear conflicts. One report that analysed the bear hunts in various states concluded that the number of conflict complaints increased annually after a hunt. As the numbers of hunted bears increase so do the number of conflicts reported. What does this tell you? Hunting bears to control the conflicts does not work. I don't blame the bears mind you; I'd be pretty mad too if someone kept coming around shooting my family members.

In August 2015, the New Jersey Fish and Game Council voted to adopt their Black Bear Management Plan, which included the hunt. In the following 60 day comment period, sixty-five percent of the comments were opposed to the bear management plan, and only four percent supported it leaving a gap of thirty-one percent missing from the equation. Thirty-one New Jersey legislators also penned statements requesting the bear hunt be called off. Even with huge public opposition to the hunt, the New Jersey Division of Fish & Wildlife is ignoring that voice and seemingly pandering to the hunting contingency.

The Director of Fish & Wildlife in New Jersey, David Chanda is himself a turkey hunter, conflict of interest much? The New Jersey Fish & Game Council, composed of mainly hunters, appoints the director's position. Does this sound like the odds just might be stacked against the bears? 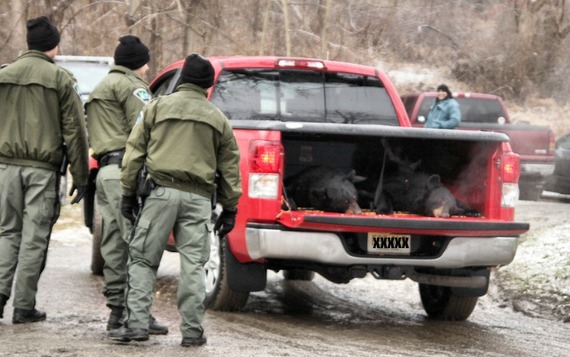 According to Angi Metler, Executive Director of Animal Protection League of New Jersey, to whom I spoke over the telephone, there has been no official count of the New Jersey Black Bears, and so it is very hard to determine what the impact the hunt will have on the bear population. Not that I've ever noticed the hunting contingency caring much about a population of animals as long as they can continue to kill them. In the case of the New Jersey Black Bear, they were hunted to near extinction. That flies in the face of hunters posturing that killing animals "helps" conservation efforts. When Metler questioned a legislator at a black bear hunt meeting and asked why their voices were being ignored, he said, "You don't buy bullets, and you don't buy guns," meaning, the gun lobby is behind the push for this kind of hunting. Metler's group is currently in the middle of a recount of the plan as mentioned above survey to account for the missing thirty-one percent.

Bears use their incredible sense of smell to locate food and are mainly vegetarians. In New Jersey, garbage has been easy pickings for them, and so the issue is easily, cheaply and humanely controlled by people getting bear-safe garbage cans and getting educated on how to co-exist. When I read that black bears are being hunted because they are swimming in people's pools and rummaging for food through their garbage, I find it incredibly hysterical and alarming that animals are sentenced to die for being "annoying" to humans. Where does our arrogant, destructive attitude end?

It is incredibly heartening to hear groups like Metler's group continue to fight for the lives of black bears and will never give up. "We're still here, and we're still fighting. Come the hunt, people will start to see dead bears on TV, and that won't be good." Metler stated, "We care about individual bears, we see family units who deserve to live their lives." I couldn't agree more.

So, if you go down to the New Jersey woods in December be prepared for a big surprise, bears will be being blasted with shotguns... yes shotguns, even baby bears and it won't be a pretty sight.

Vigils are planned on Dec 7th at the way stations the killed bears are brought in and at other sites. For more details contact:http://www.aplnj.org/

"The animals of the world exist for their own reasons. They were not made for humans any more than black people are here for white, or women created for men."
Alice Walker