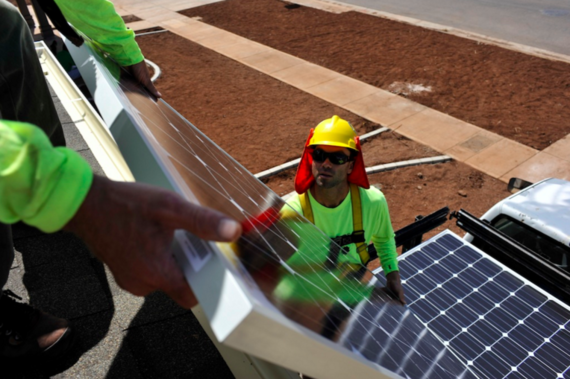 Many businesses are evaluating solar projects as a method of managing their long-term electricity costs while increasing their clean energy portfolio. Patagonia also views them as a corporate investment opportunity, a strategy it encourages other businesses to emulate.

The fund, actually the second one of its nature backed by Patagonia, uses a combination of solar investment tax credits -- right now, they cover up to 30 percent of the costs -- and projected income from 20-year power purchase agreements (PPAs) to buy approximately 1,500 residential solar projects.

The fund falls under Patagonia's $20 Million and Change venture capital program, launched in 2013 to back "responsible start-up companies" interested in benefiting the environment.

Typically, the initiative takes a 5 percent to 10 percent equity stake in new companies -- it could take year for those investments to pay off, if at all, said Phil Graves, director of corporate development for Patagonia. In contrast, it's currently possible to realize double-digit returns on a solar fund of this nature, far more quickly than otherwise would be possible, he said.

"We think CFOs should look more closely at this," Graves said. "Even if you're not environmentally minded, it's still a great investment opportunity."

This is the largest single investment that Patagonia's venture group has made so far.

The fund actually brings together several certified B-Corporations, for-profit companies that must meet explicit guidelines for social and environmental performance and transparency. Patagonia is putting up $10 million by acting as the tax equity investor. New Resource Bank and Beneficial Sates are the lenders. Kina'ole is managing the fund, while Sungevity is the project developer.

The projects will be spread across Arizona, California, Connecticut, Delaware, Maryland, Massachusetts, New Jersey and New York. A previous fund established back in 2014 funded 1,000 residential rooftop installations in Hawaii. It totaled $27 million. The funds make solar energy available to homeowners through leases.

Kina'ole is discussing similar initiatives with other companies, but the fund manager isn't prepared to share their names, said Blair Herbert, one of the investment firm's principal partners. "We would love the opportunity to show them how it's done," Herbert said.

One thing companies must consider to make this happen is the tax structure of their business: it's simplest for C corporations, which are taxed separately from their owners, to use the U.S. clean energy investment credits in this manner, Herbert said.

Congress passed a bill in December extending the production tax and investment tax credits that have contributed to dramatic cost reductions for wind and solar development over the past several years. That extension could inspire a major capacity increase in new wind and solar capacity over the next five years -- almost 37 gigawatts, according to estimates by Bloomberg New Energy Finance.

What happens after 2019, when the solar investment tax credit drops to 26 percent instead of the current 30 percent? While the returns won't necessarily be as high, Patagonia's Graves believes solar projects are still a good investment for his company.

"We could still do this if the tax credits weren't in place, although they certainly help," he said.