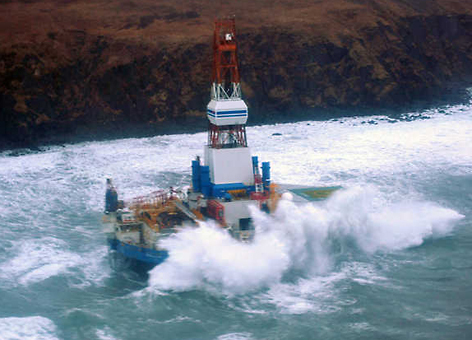 Last week, President Obama rightly declared in his State of the Union address: "No challenge poses a greater threat to future generations than climate change."

This week, the Obama administration announced plans open up the Atlantic Ocean to oil and gas drilling and offer more lease sales in the sensitive Arctic waters off Alaska. Ramping up offshore drilling will not only raise the risk of disastrous oil spills and threats to wildlife, but will also deepen our dependence on the very fossil fuels driving us into the global climate crisis.

Here's the thing about dealing with global warming: You can't say you want to make it better and then do the opposite. Rhetoric won't curb carbon dioxide emissions and poetic speeches won't stop the seas from rising and the planet from warming.

Producing and burning what's believed to be recoverable oil and gas in the Arctic Ocean could release 15.8 billion tons of carbon dioxide into the atmosphere - that'd be like adding the equivalent of nine years' pollution of all the cars, trucks, airplanes and other forms of transportation in the United States.
That's taking us in exactly the wrong direction.

Climate scientists tell us we need to reduce carbon in the atmosphere to 350 parts per million to avoid catastrophic, irreversible impacts. Today it's hovering at around 400 parts per million, so we have a long way to go.

The clock is ticking though. The decisions we make now about fossil fuels and energy development will have massive repercussions for future generations - coasts swallowed by rising oceans, dangerously warm temperatures, droughts, food shortages, deadly weather events, wildlife extinctions, the list goes one. We can still avert the worst that climate change will bring but the window for action is rapidly closing. And once it's shut, there's no going back.

President Obama ought to be banning offshore drilling in the Arctic and along the Atlantic coasts, not giving them new life. It's a disappointing and troubling move that casts a long shadow over his promises to finally tackle this crisis.

Yes, the oil and gas industries will be thrilled to sink their drills into these pristine places but the rest of us - people and wildlife today and tomorrow - will be left coping with a planet suffering from the terrible cost of policies that valued profit and greed over all else.

We can do better. And we must, before it's too late.