Why is this political race so angry? Have you found yourself discussing this and wondering why it's so heated? I don't think I've ever seen it quite so bad. Politicians are acting like childish 5-year-olds. And many of their followers are not much better. The only thing anyone seems to agree on is that they want the government to change.

People are angry because they're not feeling seen, heard and valued by the government. They are fed up. Everyone is tired of feeling as if they don't matter.

But here's the real issue...

The government treats us as if we don't matter, because this is how we treat ourselves. It's no different with our relationships at home and work. If we don't value ourselves then we won't be valued in our outer world. Think of it as a woman who continually gets in abusive situations. We wonder why in the world she would do that. But so often, that is what happens. Even though the woman says she would like to have a better life, her subconscious mind holds beliefs that tell her she deserves abuse. So that is what shows up.

When we feel that the government isn't hearing us, it's because we have subconscious beliefs that tell us lies such as 1) we don't deserve to be heard, 2) we can't have a voice, or 3) we are not valuable. For some, the government mirrors inner beliefs that say we must suffer.

We take on these beliefs as children when we are told to "be good" and that we must make others happy at the expense of ourselves. So we suppress our voices and give away the power in our lives. We are taught to treat ourselves as if we don't matter. And then that is what shows up in our outer world when we become adults.

Your thoughts and feelings hold vibrations. If you have a subconscious belief that says you don't deserve to be treated as if you matter, it will attract people and situations with similar vibrations.

My kids used to fight a lot when they were little. This drove me nuts. I was your typical mom who just wanted them to stop. However, I never felt as if my desires were heard. What I didn't understand is that my kids were matching my vibration. Then one day I heard a voice in my ear say, "See the gift Terri. Your kids' fighting is a mirror to you." That was my cue to go within and talk to my inner child.

I imagined little Terri, the 5-year-old inside of me, and asked her what the situation was mirroring to me. She reminded me that I had been raised with a belief that said it wasn't okay to have a difference of opinion, to debate, much less argue, and if you did any of these things, you got into trouble. What an AHA! With that realization, I took back the authority of my life and told my inner child that she had my permission to have her opinion, to debate and even argue. I allowed myself to cry and vented all of my thoughts through journaling and released the bottled up pain that I had been holding onto for a lifetime. These beliefs and the feelings attached to them were the chains that kept me in a low vibration. But with my release, I raised my vibration and, lo and behold, my kids quit fighting! I'm not joking! Their shift mirrored my own.

The current political battle, much like my kids, is a sign for us to go within and heal. 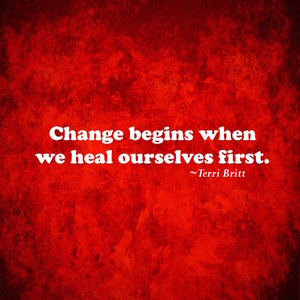 Gandhi once said, "Be the change that you wish to see in the world." If you're angry and tired of the world around you not treating you as if you matter, do the inner work. Make it your number one priority to go within and heal the subconscious beliefs that the current political environment is mirroring back to you.

If every person took responsibility and raised our vibrations to inner acceptance, our families, communities and the government would mirror this back to us. Change begins when we heal ourselves first.

Terri Britt is a spiritual coach, inspirational speaker, former Miss USA, and the award-winning author of The Enlightened Mom. Are you ready to raise your worthiness quotient? Grab my free E-book Women Leaders of Love: How to End the #1 Massive Mistake Women Make and Unleash Your Greatest Act of Service and I'll show you how!