Two days ago, Carolyn Luby, an undergraduate at University of Connecticut published a remarkable open letter to the school's president, Susan Herbst, in The Feminist Wire. In the letter she made her case and argued persuasively that the school's new mascot and branding should be reconsidered. The school had decided as part of this visual identity revamping to change its Husky Dog logo from the current mascot to a more "powerful and aggressive" looking logo. She was polite, deliberate and thorough in her analysis and reasoning. So, of course, people are harassing her, belittling her and violently threatening her with rape. Oh, and the campus police haven't been particularly helpful. Where do you begin to tackle a culture where a school mascot is a popular rape meme and the campus television station airs a video for an campus hot-line that features a "howler monkey bitch" who is "crying rape?"

As part of this anti-feminist backlash targeting a female student daring to speak in defense of safety for women, the site, Barstool Sports reposted her letter, which generated the predictably violent and misogynistic gender-based comments. A second site was created just so people could make rape jokes against her. On campus people are harassing her and she is receiving hate mail. Even Rush Limbaugh has weighed in to mock her, minimize the real threat and actuality of violence against women, and mumbled in his tired old patriarchal patois about Feminazis and cartoon characters. I will not link to anything he says or does because it is usually infused with a mean-spirited, dangerous ignorance and darkness, and I like information rooted in truth that sheds light and makes the world a better place.

To put her letter in context, University of Connecticut was under a similar spotlight because of an ad that aired on the campus TV station last year. The ad was for a GPS-equipped emergency phone system on campus. According to a Huffington Post report the ad showed a woman escaping from an assailant, "But when the woman tries to use the emergency system to summon help, it misunderstands her words and a robotic voice calls her a "cock gobbler" and "howler monkey bitch" who is "crying rape," which gives the attacker enough time to catch up and strangle her in the parking lot." The station apologized. Is anyone in the administration awake over there?

You can read her letter, as well as a Change.org petition in support of her efforts.

Here is all you have to know to decide for yourself. Here are four screen captures that might help:

This is UConn's new mascot, with Limbaugh, posted on his site.

These are popular rape memes that circulate on line and are commonly posted and shared: 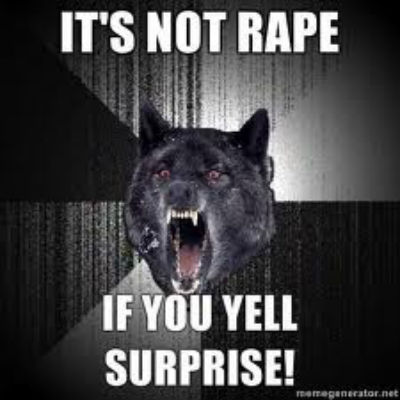 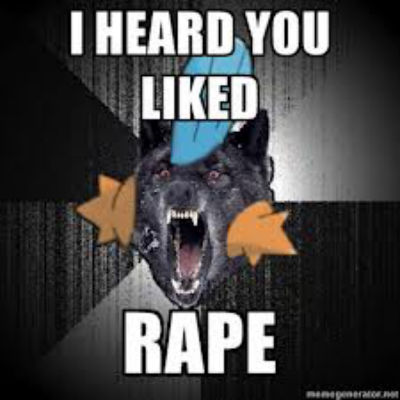 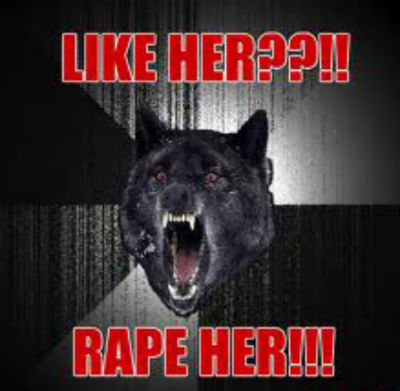 UConn did not, obviously, create the wolf, or the meme. However, the meme exists and the use of the wolf attests to the very points being made by Luby. As the petition explains, she was correct -- this is a threatening image, used to trivialize rape and mock rape victims, and it communicates the wrong message to both men and women trying to live in a less violent society. The response against her attempts to speak civilly in public about a serious topic attest to why her speech is necessary to begin with.

Any young woman with even a passing familiarity with the web has probably seen these images. I've only posted three here, just go google 'wolf rape meme' for yourself and then think "Go! UConn! Go!!" This is beyond ridiculous.