Why is are we the only developed country without universal health care, tuition free public college, mandated paid vacations and paid child leave, among other benefits, all major indicators of social well-being? We shouldn't need a Michael Moore movie, such as his latest Where To Invade Next, to tell us what we either no longer provide to our citizens or must pay much more for?

Nobelist Robert Shiller has lamented this fact in a recent New York Times Upshot column. "Economic inequality is already a concern, but it could become a nightmare in the decades ahead, and I fear that we are not well equipped to deal with it."

In fact, the latest CIA World Factbook statistics have told Americans for years that we have a very unequal society; in fact the greatest inequality in the developed world. 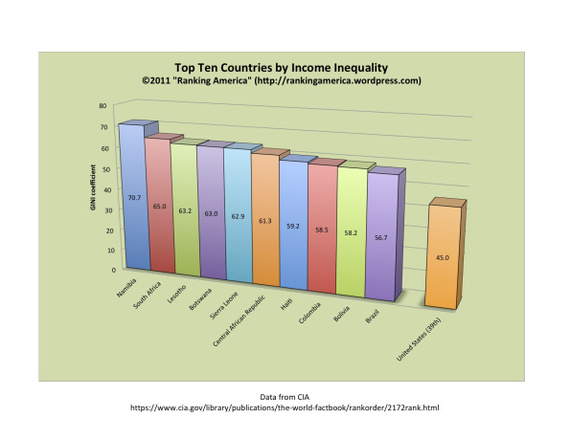 The US is ranked 102nd in the Gini inequality index of 145 countries that the CIA measures for income distribution . Only China of major countries is lower. Even Russia has less income inequality.
And it is this statistic that best highlights the social benefits that all Americans no longer enjoy. For instance, US residents going to public colleges and universities paid no tuition until the 1970s. Another measure that helps to smooth out income inequality is the national minimum wage, which is still $7.25 per hour in the US, whereas is approximately $16 per hour in in Australia for a full time working adult.

Why aren't we equipped to deal with it? Dr. Shiller and even Angus Deaton co-discoverer with wife Ann Case of the exploding drug and suicide rates of non-college educated white adults, commenting on what he called the "grotesque expansions in inequality of the past 30 years," gave a pessimistic prediction: "Those who are doing well will organize to protect what they have, including in ways that benefit them at the expense of the majority."

And that has happened since the 1970s and the dominance of free market, so-called Laissez Faire ideologies that strove to cut taxes and government regulations for the sole purpose of protecting the wealth of those already "doing well".

Yet we do know how to level the playing field. We should reenact the labor laws of earlier years that allow collective bargaining, and disallow the right to work laws in 25 states that have caused a mass exodus from union jobs that pay higher wages and salaries. Then raise the income tax rate to what it was before President Reagan succeeded in un-taxing the wealthiest--70 percent for the highest tax bracket.

We could also pass real universal health coverage that all other countries enjoy. It would lower health costs--maybe to what it is in other developed countries, which is 50 percent less than Americans currently pay.

So we do know how to enact economic programs that create a more equal society. The European countries in part have succeeded via higher tax rates, but this provides many more services, and at much cheaper costs than so-called private enterprise.