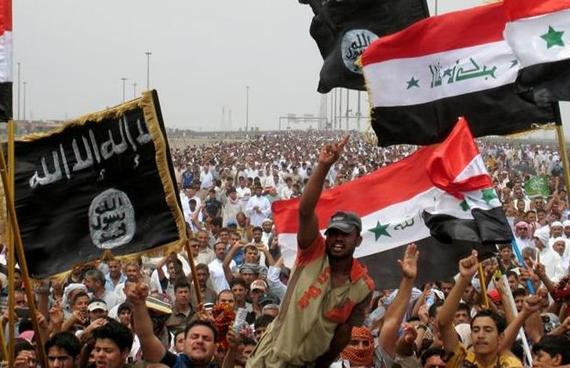 Many imagined World War III would be fought using advanced weaponry and nuclear arsenals, not knowing that the most primitive weapon, radicalism, is the most lethal amongst all. Civil war ignites when countrymen of differing political and religious ideologies, sometimes more loyal to foreign powers than to their national identity, wreak havoc whereby a country or even an Empire crumbles. It is as if history is repeating itself. Great civilisations fell, never to be rebuilt and now nation-building seems a forlorn dream.

The 2003 regime change in Iraq was not only a 'Shock and Awe' campaign to oust Saddam's Ba'ath Party, but to serve as a wakeup call for all regional powers in the Middle East. Establishing democracy and allowing people to exercise any degree of freedom of opinion is still a taboo, seeming to pose an existential threat to the national security of many ruling regimes in the Arab World. Is extreme radicalism preferable to democracy?

The recent fall of Ramadi city to the hands of the so-called Islamic State (known as ISIS or Daesh), was inevitable. Ramadi, the centre of Anbar province (60 miles to the west of Baghdad), as well as other Sunni-dominated provinces in Western and Northern Iraq, were already death zones, pre and post-Daesh, posing a threat to any Iraqi who welcomed the U.S.-led regime change of 2003. This was the region the U.S. forces failed to tame and where they incurred the most casualties during their stay. The U.S. failed to sell democracy to a group who knew they would end up in the minority.

It was from Anbar province, the Sunni protests ignited a strife against the Iraqi government in December 2012 calling for radical reform which included many illegitimate demands, while Daesh and al-Qaeda splinter groups moved freely to parade their weapons and fly their flags publically long before the fall of Mosul in June 2014. Chanting for regime change was commonplace. The protest platforms were supported by almost all Sunni leaders who were expected to be partners of a democratically elected government of the new Iraq. They found it too difficult to accept the democratic outcome which replaced their dominant power pre-2003, even though they were only a minority.

The recent victory of Daesh in Ramadi came after a number of strategic advances achieved by Iraqi Security Forces (ISF) in the north and west of the country. Daesh was so desperate for a big victory beyond their usual social media propaganda campaigns to compensate for the loss of Tikrit, Saddam's hometown, that was recently liberated by al-Hashd al-Shabi, known as Popular Mobilization Forces (PMF). For Daesh, it was only possible to seize control of Ramadi after the full mobilization of their local supporters backed by foreign fighters, bringing an army of suicide bombers to launch a decisive attack and offer no mercy to Sunnis collaborating with the government. Mass executions took place. Video footage revealed mass desertion by local police and security forces, abandoning their posts and leaving their weapons behind. Many have joined Daesh, and a victory was declared which knocks another nail into the coffin of democracy. That night, people in Mousal went out to the streets, jubilant and celebrating en masse. The day after, Daesh paraded their weapons and hundreds of armed vehicles in Rutba, west Ramadi; a public demonstration that the international coalition air forces have drastically failed to spot, despite the sophisticated surveillance and intelligence they possess.

There are many factors that have contributed to the fall of Ramadi. The U.S. training has been weak, there are not enough Sunni Arab men willing to fight in Anbar, some local police are double agents for Daesh, some are not willing to fight family members, intra-Sunni political and local conflicts and also bad politicians in Baghdad. The U.S. did not want the PMF in Anbar and the result was Ramadi fell, Anbar provincial council voted to call in the PMF and some tribal leaders have been asking for that for months.

Iraq's Prime Minister Haider al-Abadi was left with no choice but to call upon the PMF to sustain military efforts of the ISF. Since the liberation of Tikrit, the PMF has become Iraq's main power on the ground. A Shia dominated paramilitary armed group, formed in mid-2014 after the collapse of the army - in response to Grand Ayatollah Sistani's Fatwa (religious edict). However, the group now includes over 5,000 Sunni tribal fighters and hundreds of Christians and other minorities who have joined, so it is no longer an exclusively Shia force. The priority of liberating Anbar is becoming high on the agenda. It borders Iraq's capital, Baghdad, and the sacred city of Karbala, which the Caliph of Daesh has vocally called upon his followers to invade and destroy the holy shrines it is home to. If this provocative situation were to arise all might be lost to a Shia-Sunni civil war, which would undoubtedly spread across the region.

Iraq is in a difficult spot. That Sunni population are now either internally displaced people (IDP) or live under the rule of Daesh, while most of their politicians are seen as rejectionists to the Shia-dominated rule. The Sunnis opted to join the political process post-2005, on the condition of being equal partners in every single administration, regardless of the democratic outcome. Yet having this caveat they have continued to act as an opposition within the government, often complying to their favourable foreign backers' requests in the region rather than engaging in constructive debate. This has significantly hindered the political process, crippled national reconciliation efforts and compromised much-needed national unity.

For Iraqis to reconcile their differences, influential players in the Middle East have to reconcile and stop using Iraq as a battlefield for their proxy war. Iraq needs western powers to act as strategic allies to safeguard its nascent democracy and contribute to state building. It also desperately needs its neighbours -- on all sides -- to help stabilize the country rather than hinder its progress. Radicalizing Iraq is no option -- if Iraq is lost to radicalism, the domino effect will impact the Middle East, engulfing the region into a religious war.

This is an unconventional warfare, hence the need for unconventional, ideological forces to adequately oppose this group. The PMF is the only counteroffensive force that could be seen as a game-changer, while the rules of engagement in the war on terror differ from those in conventional warfare. Daesh's suicide bombers are coming to die, and Iraq needs to fight them with an army that's willing to die to save the country, not one that wants to go back home at the end of the battle. This is an ideological war of radicals vs. moderates.

Surely, national reconciliation is a necessity for Iraqis. The question is whether this process should be put into motion now or once the war is over. However, the U.S. and Iran need also to reconcile their differences and invest more in diplomacy than in war mongering and conditional steps to peace. Both countries are seen by most Iraqis as strategic partners for obvious reasons. Militarily, the U.S. should not impose conditions on the Iraqi Government as when to use its air force. Tikrit was not liberated until PMF, ISF and coalition air strikes did their part. Up until recently, ISF and the international coalition tried to repeat the process but exclude the PMF. They now know better. All three are needed for success against Daesh, otherwise, the latter will remain and expand in Sunni Iraq creating an unethical dictatorship devoid of any charity or human kindness.