Nick Jonas has spent the better part of the last month promoting his new single, "Jealous," and his upcoming DirecTV series,Kingdom, with a dizzying media tour that has included not only interviews with several gay publications but stops at several gay bars.

At HuffPost Gay Voices we've written about how Jonas happily showed off his abs at these bars, engaged in some light flirting with the patrons and has generally spent the last few weeks going out of his way to prove that his affinity for his gay fans is more than a mere marketing ploy (or if it is marketing ploy, it's one to which he and his team are fiercely dedicated).

Then, just when we thought Jonas had given all he had to give to us, we were gifted with his photo shoot in Flaunt magazine, which included several shots inspired by Marky Mark's iconic 1992 Calvin Klein underwear campaign. The images hemorrhaged their way across the Internet (and for good reason: They're hot and nostalgic, two things we can rarely get enough of) but, for me, at least, they're not the most interesting thing to come out of the Flaunt shoot.

The image I keep coming back to is this one: 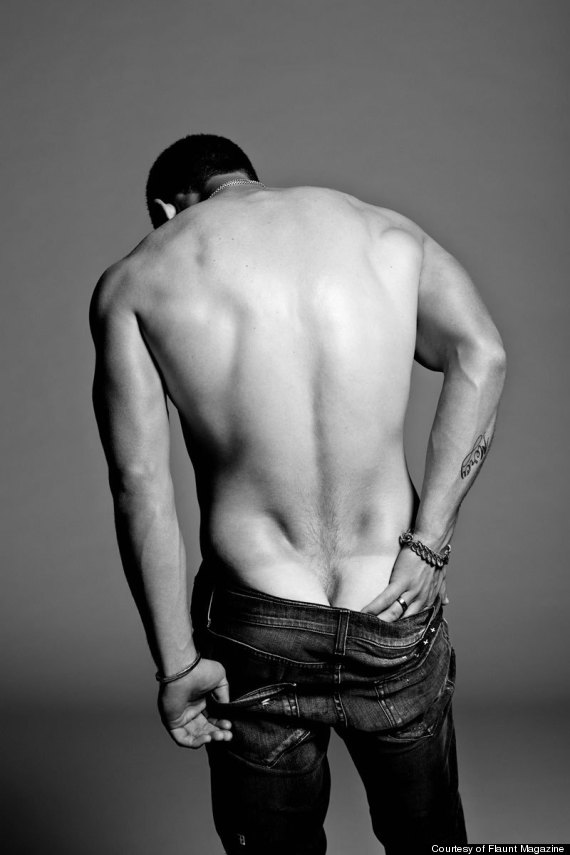 It's a beautiful photo, but it's also one that you'll rarely see in mainstream media because of one thing: the small patch of hair fanning out across Jonas' lower back and creeping down his ass crack.

An appreciation of body hair in our culture has waxed and waned over the years. Today the male bodies presented to us (and especially to young men and women) as enviable and desirable are often hairless. I can't remember the last time I saw a contestant on The Bachelorette with a full chest of hair (not that I watch that show). Even the werewolves on Teen Wolf are hairless (not that I watch that show either).

And when we do see body hair in magazines or movies, it's always controlled and coiffed and constrained to the chest and stomach. Remember the funniest scene in The 40-Year-Old Virgin? It was when Steve Carell got his torso waxed. Whenever that scene plays, we hold our collective breath as Carell undergoes his metamorphosis, mesmerized by the agony (and his hilarious reaction to it) but also relieved by the taming of the beast before our eyes and his implied transformation from wild man into gentleman.

Hairy backs and asses are even bigger jokes. If you have one (and many, many men do), you can't be the leading man; you're someone's gross dad or lecherous bad date.

Nick Jonas is certainly no one's creepy uncle, and he's not a niche figure who doesn't get a lot of traction in Hollywood. He's a 22-year-old bona fide celebrity whose tax return may very well list his occupation as "heartthrob." So when I saw his hairy lower back and ass, which could have been erased easily via Photoshop, I got excited because I felt I was seeing what maybe, just maybe, could be interpreted as a breakthrough.

I can already see the comments section of this blog post filling up with responses like "Who cares?" and "Why is this news?" And you're right: This isn't "news." No one else even seems to be thinking, much less writing, about this photo. But before you write me off as just another garden-variety perv (which is totally valid most of the time), I hope you'll consider how important visibility is for creating change.

As more and more queer people come out and we gain more and more "possibility models" (as Laverne Cox has so eloquently put it) in the media, we feel more permission to be exactly who we are, and I believe the same is true for body image. Imagine being a 22-year-old guy and feeling ashamed about your own hairy back or hairy ass and seeing that image. Or imagine being an 18-year-old young woman and seeing that photo and having to readjust your idea of what sexy is. Even in queer culture, with our bears and otters and cubs and wolves, we're no stranger to shaming bodies -- our own and each other's -- and tiny, but visible, moments like this one are important for us too.

I'm not claiming that this photo is some kind of furry panacea for all that ails us. Of course Nick Jonas' body conforms to (or surpasses) societal norms in many ways, and seeing it could inspire body shaming or set unrealistic expectations for some people. I'm also not claiming that men shouldn't shave or wax or laser their bodies if that's what they prefer, but I would like to at least raise the question of why hairlessness is the preference for so many of us and address the stigma that often comes with being hairy. And let's face it: Jonas isn't exactly hirsute, but I believe there is something radical about that patch of hair -- however small, however innocent -- climbing out of his jeans in the pages of Flaunt. And I think it's worth pointing out and talking about, because this is how our culture begins to change -- one image at a time -- and because I want to celebrate progress -- however modest -- wherever I find it, even (especially?) if it's in Nick Jonas' hairy ass crack.