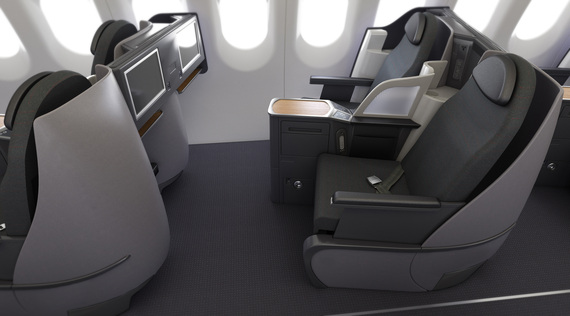 Rude and uncooperative fellow-passengers make flying difficult for airline staff and fliers alike. And although there will always be die-hards who insist that you can never get upgraded on a flight merely for being "nice" I beg to differ (yes, yes, I know, elites get upgraded automatically by the computer systems if they put themselves on the upgrade list, but gate agents and flight attendants have more power than many people believe).

Consider my experience on a recent American Airlines flight between LA and New York's JFK.

Lo and behold, the seat next to me in business class is empty as the door is about to close. With so many people attaining "status" in American's frequent flyer program, or paying $75 plus 15,000 miles for a one-way upgrade, it almost never happens on this route.

Two minutes before scheduled takeoff and there's a kerfuffle in economy. Someone is not happy with his seat and is letting the cabin crew know about it in no uncertain terms. Angry voices waft over the boarding music. Maybe someone wanted to sit next to a traveling companion. I was never able to find out.

A gate agent and a flight attendant appear at my row.

Gate agent: "Is this seat occupied?"

Gate agent: "Well, I need to upgrade someone."

Gate agent, exasperated: "I an NOT rewarding that kind of behavior with an upgrade!" (Her exact words.)

I'm guessing that 12C had some kind of status. Or felt he did. Or maybe he was just the source of the problem and they were trying to mollify him.

So who got the upgrade? A young man who, I later learned, volunteered to change his seat to settle whatever dispute was going on back there. He had never flown in business or first class in his life.

Young man, after the flight attendant pours the Lanson Champagne: "Dude, how much does this cost?"

Young man: "Free? As much as you want free?"

A menu is handed out.

Young man: "Is the food free too?"

Me: "Yes, everything is free."

I took as much pleasure watching him enjoy his well-deserved upgrade as he did experiencing it.

During the flight, a couple of flight attendants stopped by to thank him profusely for being such a trouper. "Things like that really do make our job easier," one said.

Young man, sotto voce, as a passenger (tank top showing off his muscles and tattoos, baseball-cap-on-backward, gym shorts) strolls past us to use the business class lavatory: "That's the jerk who gave the flight attendants a hard time." You guessed it, 12C. Although he didn't get upgraded, he still felt he was entitled to use our lav, which he did several times during the flight.

Lesson: people really do get upgraded just for being nice. Sure, it doesn't happen all the time but it does happen. And even if you're not getting an upgrade, be nice anyway.

Have you ever gotten upgraded on a flight, even if you didn't have "status" in an airline's frequent flyer program? I'd love to hear about it. Share in the comments!