My podcast, The Sewers of Paris, is all about the entertainment that's changed the lives of gay men. And my guest this week is Charlie Logan, founder of a series of massive queer geek parties in Seattle. Sci-fi and fantasy has always dominated every phase of Charlie's life, from his childhood in a rural mining camp, to his closeted longing for one of his classmates, to the moment he met his idol, the openly gay man who wrote the Tribbles episode of Star Trek. 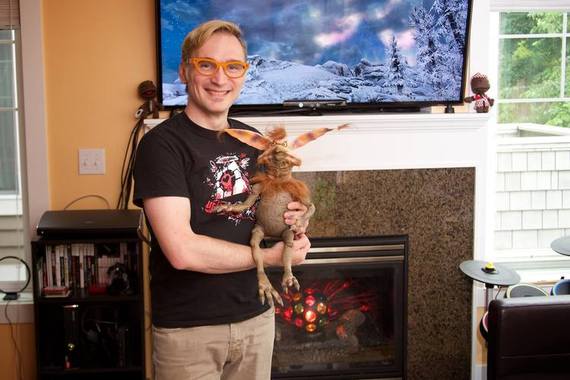 Sci-fi and fantasy seem to come and go in waves. Sometimes it's super mass market popular, as evidenced by everyone getting excited about the Avengers. And then it dies back down, as happened after everyone was sick of The Hobbit. But throughout all of that, the fans stick around. But why? What is wrong with these nerds? Why won't they get a life?

Well, geeky entertainment like sci-fi and fantasy can hold a special appeal for queers. If you're looking for a place where you can feel comfortable and welcome and safe, but you live someplace hostile or you're in the closet, you might only be able to find what you're looking for in an imaginary world.

Star Trek, when it worked, showed us humanity at its best. And that the show never considered gays and lesbians to be a part of that best, even after all these years, is worse than disappointing. Star Trek served as a mirror for society, and it's a mirror in which we simply have never been reflected.

That hurts. We look to science fiction to show us progress, what we might become, what we can aspire to be. But even though our sci-fi takes place in the future, it's still made in the present. Hence the miniskirts and misogyny of original Star Trek, and the instant anachronism of spaceships full of blinking lights -- a silly trope that survives even to this day. It's easy to show people a vision of a future that's more shiny, it takes a lot more courage to show them a future that's more just.

During the '90s, "The Troubles With Tribbles" writer David Gerrold penned an episode of Star Trek: The Next Generation entitled "Blood and Fire" that featured a gay couple; but the show's producers were terrified and they buried the episode. Years later, the script was resurrected by fans who took David's script, adapted it to The Original Series, and produced an the episode, directed by David Gerrold himself. The fan-made version of "Blood and Fire" is amazing, better than some official episodes of the show, and you can watch it at StarTrekPhase2.com.

If you're looking for a sci-fi universe that fully incorporates queers, I can recommend two shows: Captain Jack Harness on Torchwood is delightfully bisexual or maybe tri or quadsexual. And the atmospheric show Orphan Black includes queer characters in its storylines. That's great -- although both programs can be far more dystopian than optimistic.

But maybe that's how it has to be, at least at first. Those darker shows are far more fearless than the glittery, shiny, mass market spectacle of pop sci-fi. They're the only ones brave enough to hold up an accurate mirror to what we are today, and looking deeper, what we could become.

It's a mirror that allows our reflection to appear, because it's not just showing us a world beyond where we live. It's showing us people beyond who we are. It's leading the way into the unknown, and that's true sci-fi. I'd much rather be included in brave visions like those than search for inclusion amongst the superficial shiny blinking lights.