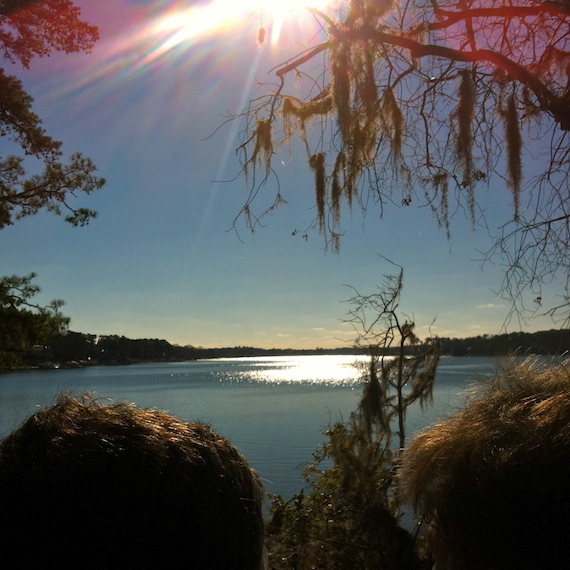 A few years ago, my husband and I visited the coastal village of Taormina on Sicily. Our hotel was situated so that we could stand on our balcony and see Mount Etna in the distance. I thought it was great that the locals had strung Christmas lights down the mountainside. Ron said, "It's not lights. It's lava." I said, "No way is that lava! Look at the colors. It's Christmas lights."

The next day, we made our way to the top of Mount Etna. And everywhere were flowing streams of burning molten lava. Even when someone offered to cast me a lava-ashtray to take home, I still had trouble believing it.

Ron always gets this stuff right. And no one wants to play geography games with him. The really good thing about him though is that when something like this happens, he doesn't rub it in my face. I've asked him why, and he says that staying supportive of me is always more important.

Staying supportive of people who are acting like jerks can be a challenge. Ron's told me the story of his first delivery as an OB-GYN resident. It was a quiet night on the ward, and he was sitting in the nurses' station, where they were teaching him to knit. They heard the elevator ping, announcing a new patient. And a foreign man burst through the doors, yelling "Help! Help!" while pushing his rapidly crowning wife in a wheel chair.

Everyone went into quick action, including Ron who would finally get to practice what he came to medicine for -- to deliver babies. The husband had his own ideas about how that would be done though. When Ron tried to check his wife's progress, the man took off his coat and threw it over her so that Ron couldn't see her, all the while yelling in broken English about the inappropriateness of a strange man looking at his wife.

What was Ron to do? First, he calmed the man by assuring him that everything would be all right. And then he delivered his first baby by poking around under a raincoat without looking.

Ron's behavior often causes me to wonder: "Who does that?!" For example, when I met him, he turned his collars. If a shirt collar was worn out, he would rip out the seams, turn the collar around, and sew it back on for a good-as-new shirt. "Who does that?!"

Well, Ron is Dutch -- and people from the Netherlands do that. They were green long before it became popular to talk about: conserving energy, recycling, avoiding waste, repairing and reusing rather than trashing. So it took him a while to get used to my paper towels and throwaway plastic.

Ron says that when disruptive energy comes at him, it helps to focus on the cause of the distress rather than whether he should react with the same type of energy -- returning anger for anger, etc. He has a strong belief that why people do what they do matters more than what they do. And that when people lose it, the most important issue is their need to be supported -- much more important than whether they're acting as a catalyst for him to feel offended. So when someone around him loses it, he's generally able to stay calm and supportive, allowing the person to save face.

I try to do the same. I like to tell my sons: "Make your partner right," and "Make your child right." But I used to catch myself making Ron wrong.

I would comment when he did something incorrectly. I'd nag him when he'd promised to do something but hadn't done it. I'd point the spotlight when I believed he was wrong about something. And it was really working against me because I kept activating what I focused on and getting more of what I noticed.

Eventually, I realized what I was doing. Firing missiles at Ron was not resolving whatever frustration or resentment I felt. And it was slowly eroding our relationship.

How did I change?

I began to look for ways to resolve my issues without involving Ron. Plus, I knew that my way of relating with him had more to do with my beliefs about him than with him. So I managed my perception of him, keeping it positive, knowing that he'd become whatever I decided to see.

I took a softer stance toward him by focusing on what I liked. And that brought out the best in both of us and resulted in better feelings.

Now, I'm almost always able to focus on Ron's best qualities. At least that's my goal. And I feel protective of his self-esteem. I make him right.

But sometimes, I just get ornery. That's when it's important to be honest and name the name of what I'm doing. "I'm acting bitchy. It's not personal. I just need a chance to blow off steam. Can you handle it?"

I'm responsible for my emotions -- no one else is responsible, least of all Ron. And it's not appropriate for me to make him wrong so that I can justify my outbursts.

So I need to get Ron's agreement that it's OK for me to vent. "I want a turn to vent now. Can you just listen to me? I'm not looking for a solution. I just need to unload."

If I get his agreement, I can go ahead. But if he says, "I can't handle it right now," I have to stop and find a different outlet for unloading.

If he's up for it and gives me the green light, it's my responsibility to safeguard both of us -- because staying supportive of us is always most important.

Expressing appreciation does more than anything else to create positive change in relationships. So I make it a point to tell Ron when and why I feel grateful.

When my son was in university, he wrote a birthday card to Ron and really nailed the appreciation thing: "You inspire me to be better, including getting on my feet and enjoying life within my means. I use you as a role model when I see others being wasteful or avoiding work. Because of you, I enjoy working and saving. I pack my lunch because you pack your lunch. I ride my bike to work because you ride your bike. If everyone had your character, sense of duty and generosity, the world would be better off."