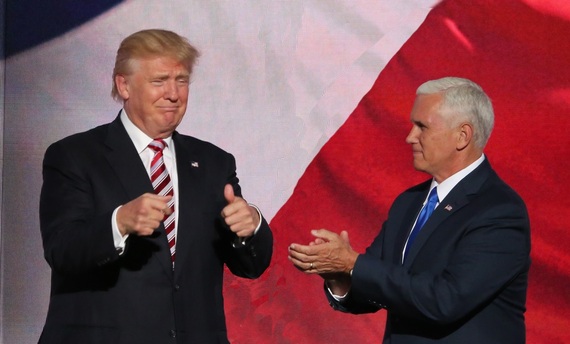 The recent incident in which Mike Pence was booed by the audience when he attended Hamilton on Broadway, and cast members called on him to "uphold our American values," has many Trump supporters up in arms over what they consider to be hypocritical behavior on the part of his critics. Donald Trump demanded an apology from the cast, calling them "very rude" and saying "our wonderful future V.P. was harassed" by them. Judge Jeanine Pirro said on Fox it was "reverse racism..(he) has done nothing to deserve this inappropriate and disgusting behavior."

Reverse Philosophy
Even those among us who vehemently and bitterly opposed the racist and divisive rhetoric that Trump and Pence (who is guilty by association) espoused on the campaign trail are forced to pause and consider whether Trump supporters, this time, have a case. We appear to be very bad losers. No doubt, if the situation had been reversed and Hillary Clinton had been booed, we would have called the audience disrespectful and boorish. And, ironically, while we feared that Trump's supporters would resort to violence if he should lose, it is we who appear to be doing so, launching sometimes hostile protests across the country and even calling on the Electoral College to disregards the election results and choose Hillary Clinton instead.

But there's a very legitimate argument for continuing to express our dissatisfaction - and even being boorish - with the newly elected President and Vice President and refusing, for now, to be gracious about their election win: The fact is, Trump and Pence did many things on the campaign trail to deserve "this inappropriate and disgusting behavior" from people today. Trump was constantly lying, riling up supporters, openly endorsing violence against his critics, embracing racism, xenophobia, and white supremacy philosophies. He relentlessly and viciously attacked anyone who disagreed with him, sometimes promoting flagrant lies and highly damaging conspiracy theories against them. His many stadium rallies were characterized by audiences calling for the jailing of Hillary Clinton and Trump himself throwing out anyone who disagreed with him.

A Dirty Shame
In simple terms, Trump won the election by fighting dirty. His behavior throughout the campaign was the very zenith of "inappropriate and disgusting behavior." It would of course be naïve to say that all other politicians - including Hillary Clinton - have always fought clean. But his mean-spirited, openly unethical and ugly behavior violated every tenet of decorum and fair play that our American democratic values demands of its political leaders - and we, as good people, hold so dear in our daily lives.

Of course, it was the right thing for Barack Obama to call upon people to "give this new president-elect a chance." As President, it is incumbent upon him to express noble ideas that unite and preserve our democracy, which is especially fragile during the transition of power.

And it would be great if we were really sore losers because we don't like Trump's philosophy, but that's like saying we resented Hitler because we disagreed with his point of view. It should worry us that Trump continues to petulantly pick petty fights on Twitter with common citizens whom he feels have personally insulted his ego, as he does with the Hamilton cast, and with Alec Baldwin over his Saturday Night Live skits; and yet, on the more serious matters like the white nationalists' march where demonstrators gave "Heil victory" salutes, and the Ku Klux Klan members who celebrated his victory - he is, if not silent, disingenuous in disavowing their support. Pressed for a comment after months of silence on these types of demonstrations, he acted puzzled recently that anyone would make the connection to him and said that, if he "energies" these groups, he wants "to look into it and find out why."

It's the typically dubious, tepid and noncommittal answer from Trump on racist issues that should signal to all intelligent Americans that his political agenda presents a clear and present danger to our democracy. The signal should be even more strongly recognized in his silence when a prominent supporter suggested internment camps for Muslims and he defends his appointment of Breitbart News' Stephen Bannon, viewed by many as an alt-right advocate, as his chief strategist and senior counsel,

It is therefore our patriotic duty to continue to vigorously renounce his political program. If the only opportunity ordinary citizens like us have to show our distaste is by booing him and Mike Pence when they mix among us in our humble everyday lives, then, by all means, let's do so.

So, yeah, it's okay for us to continue to treat Trump and Pence with disrespect. We're just following the example of its most zealous practitioner.