In the car the other day, we caught a bit of Marketplace on NPR. We like Marketplace -- it puts economic news in social and political context, making it the perfect business show for people like us, who don't know much about business.

But we do know a bit about science, so our ears perked up when host Kai Ryssdal began interviewing Paul Basken, of the Chronicle of Higher Education, about the money allocated to basic and biomedical research under the American Recovery and Reinvestment Act ($10.4 billion for NIH, the National Institutes of Health, and $3 billion for NSF, the National Science Foundation).

The discussion focused on two questions. First, will these appropriations produce better science? And second, will they . . . well, actually stimulate the economy? The answer to both questions is, "Absolutely."

Unfortunately, Basken's noncommittal commentary, while likely well-intentioned, missed the boat completely. Here he is responding to the first question and posing the second:

"We'll have to see. But there's certainly good reason to expect that. The question I think also is whether we're going to see a large number of jobs from this. Because remember the whole point of the economic stimulus bill was to create jobs. And in this kind of funding it's a little questionable as to how many jobs you're really creating, because what you're doing is giving money to university researchers who already have jobs at their universities. They buy some scientific equipment, but a lot of times that scientific equipment may have been made in another country. There's been some criticism, or at least questioning, as to whether this kind of spending is a jobs creating mechanism."

Just to kick things off, it's not really true that "the whole point" of the stimulus bill was to create jobs. That was the primary point, but the Act has a related social agenda that includes promoting renewable energy and education. As those who designed and signed the bill understood, true recovery requires building a robust foundation by investing in growth industries and human capital.

Now, because Basken doesn't specify the "good reasons" to expect better science from increased appropriations, we will. In recent years, funding agencies have received many more high-quality proposals than they could fund -- at NSF, for example, only 56% of grants rated "Very Good" or "Excellent" got the nod. In other words, there is a backlog of outstanding, ready-to-go research projects. The NSF is now funding some of these with the stimulus money. This little financial cushion also means that the agencies can finance the pursuit of Big Ideas. When money is tight, the tendency is to fund only projects that seem guaranteed to succeed; this in turn discourages scientists from tackling major, potentially boundary-shattering projects, which are inherently risky.

So yes, we'll get better science from this -- and not a moment too soon, as we contemplate overhauling our energy and health-care sectors. But what about boosting the economy? Aren't we just subsidizing a bunch of nerds who already have cushy academic jobs and buy fancy Japanese-made instruments?

No. First of all, 50-60% of most federal research grants go not to the scientists, but to their universities in the form of indirect costs (a.k.a. overhead). That money is lifeblood for institutions that employ thousands of non-academics: administrative assistants, cafeteria workers, compliance and student-services officers, maintenance people, IT staff, analysts, etc. And these people are losing their jobs. In the library downstairs from where we're typing this, the staff is anxiously awaiting news about layoffs. The nice people who used to run the copy center are already gone.

Second, the grant money that remains for the scientists after indirect costs doesn't all go to fancy foreign-made equipment. There's inevitably some of that, even though grants funded with stimulus money come with Buy-American strings attached. But a large portion of these grants will go directly to -- you guessed it -- employing people. These are the graduate students, post-docs, research assistants, and technicians who make modern research happen. These people purchase goods and services just like everybody else, and their jobs depend on grants from NIH and NSF.

But we're not done yet. Of the $3 billion going to the NSF, only $2 billion is being distributed as research grants. The remaining 33% is being allocated in other economy-stimulating ways: $600 million for infrastructure and facilities development, which will fuel industries ranging from steel (American steel!) to construction; $65 million for teacher scholarships; and so on. The NIH appropriation includes another $1.5 billion for renovation and construction of facilities nationwide.

Mr. Basken did get one thing right, though:

"But then again, people also point out, when you spend this kind of money what you do is you get spinoffs, and you get companies that are formed. You hit the next Google or whatever, maybe that alone will create thousands of jobs."

Google is actually a great example, since it began as the research project of two NSF-funded graduate students working with an NSF-funded professor. But it's certainly not the only example. We have the NSF to thank for Magnetic Resonance Imaging, biotechnology, geographic information systems, and much more. Millions of Americans have the NIH to thank for not being dead yet. Truthfully, the return on our relatively modest investment in basic research over the last half-century is so astronomical that it's impossible to calculate. Science hasn't just stimulated the economy; it has revolutionized the economy, and our lives along with it.

Finally, take a second to put these investments in perspective. $70 billion for an inept insurance corporation. $80.4 billion for the folks who gave us Hummers and the Dodge Nitro. $1.5 trillion (trillion) in Federal Reserve rescue efforts. $677 billion (and counting) for a war based on a lie.

If we can afford all of that -- and even if we can't -- we can afford $13.4 billion for the agencies that underwrite almost all of the basic and health-related research in this country. It's the right thing to do, it's long overdue, and it's good business, too. 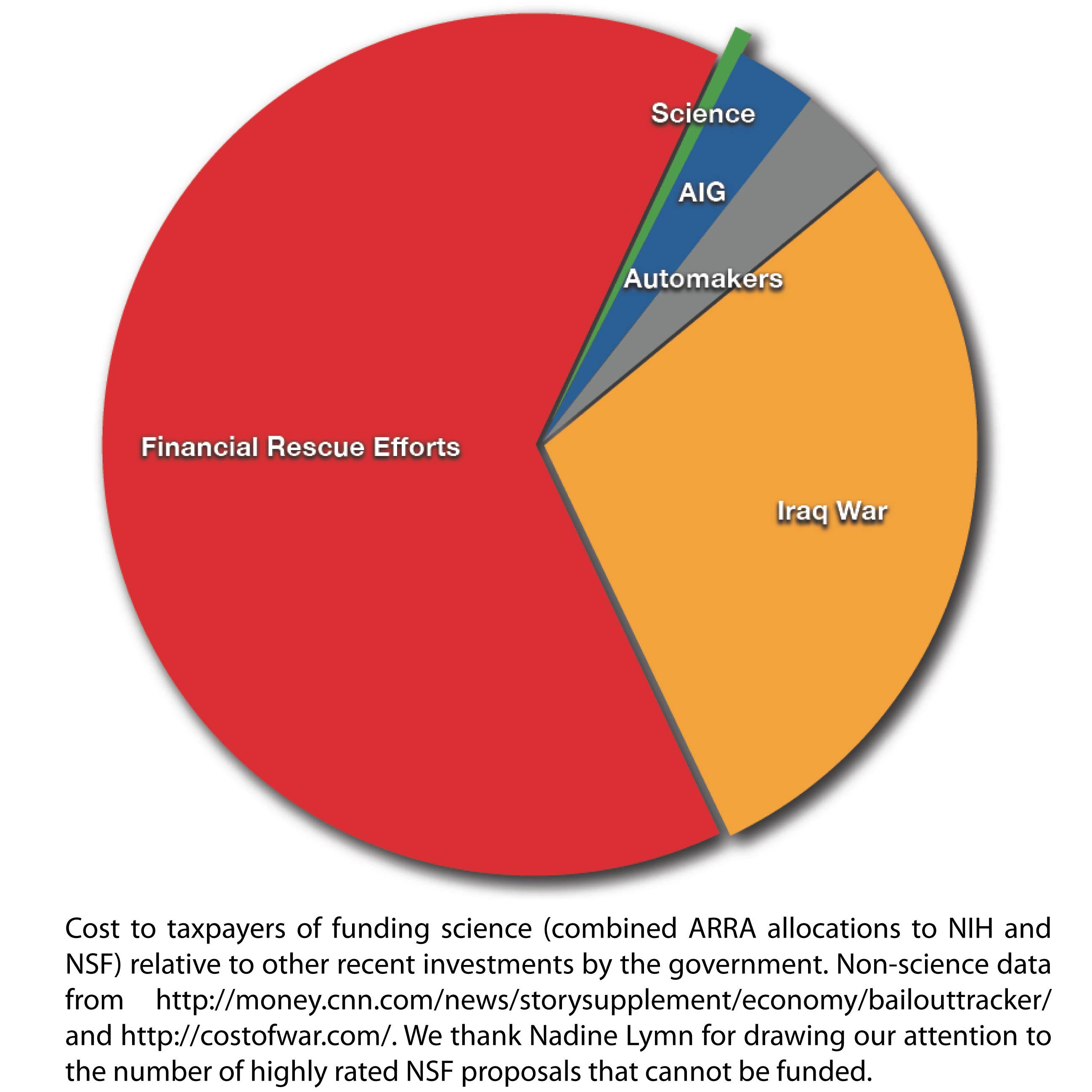