If you would've asked me five years ago what boundaries were I would've had no idea how to answer you.

Boundaries were a complete foreign concept to me. It wasn't until I had moved to South Korea, where I was in the midst of all kinds of relationship problems, that a friend had introduced the concept to me by mailing me a copy of the book, "Boundaries: Where You End and I Begin" by Anne Katharine.

That friend and that book started the beginning of an entirely new way of living and being in the world, which, ultimately, transformed the way I've approached relationships. My relationships with guys I dated, friends, family, co-workers, peers, clients or customers, and even people I would pass on the street began to change.

I no longer felt susceptible to all of the energies of others going on around me. I was no longer at the complete will of what other people wanted or needed from me. Instead, I was finally able to be in-line with what I needed. I was now able to live in-tune with my own desires, needs, and feelings.

I was finally able to tune into myself and honor myself, rather than to live in a way that involved constantly giving and accommodating to other people's needs and wants. I also finally stopped getting caught up in other people's problems so much that I'd treat them as my own. I learned how to start saying "no" to things that I really didn't want to do, and saying "yes" to things that I really did want to do.

As a result, I managed to stop going out and drinking so much. I stopped being around people who always wanted things from me but hardly gave back what I had given them. I stopped dating guys who expressed no desire to have the kind of relationship I wanted simply because I was attracted to them. I stopped experiencing so much gossip and drama in my personal relationships.

Instead, I started becoming more in tune with the real me. I started traveling and visiting places that I truly wanted to go to (even if that did mean going by myself). I started taking up hobbies and activities that I always wanted to do that I never made time for before. I started eating better foods for my system, which significantly helped improve some health problems I had been experiencing.

And because of learning this one relational tool, I was also able to find myself in much more fulfilling and loving relationships. I've developed friendships where we have enough similar interests to where I can truly be myself and there is mutual support. I've also found myself in a romantic relationship where there is so much mutual loyalty, respect, and love that having differing views and beliefs on things is hardly a deal-breaker.

So why is it important to have boundaries in relationships?

It's important because it separates our experience from other people's experiences.

It's important because it helps us become more aware of our own experience so that we can fully own and be in control of ourselves.

It's important because it allows us to take better care of ourselves -- emotionally, mentally, physically and spiritually -- so we feel so much less stressed, overwhelmed, and out of balance. 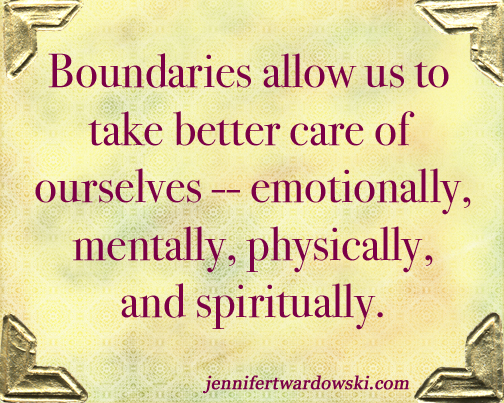 And, most importantly, boundaries allow us to truly become more in-line with ourselves. The more we are true to ourselves, then the more we allow others to truly see and experience us for who we truly are. And this, my friends, opens the door to real, true, and genuine love.

Jennifer is a self and relationship coach and the founder of JenniferTwardowski.com. She helps women worldwide create fulfilling relationships with both themselves and others so they can live happy and joyful lives. Click here for her Free Self and Relationship Healing Meditation and weekly blog updates. To learn about how you can work with her, click here.