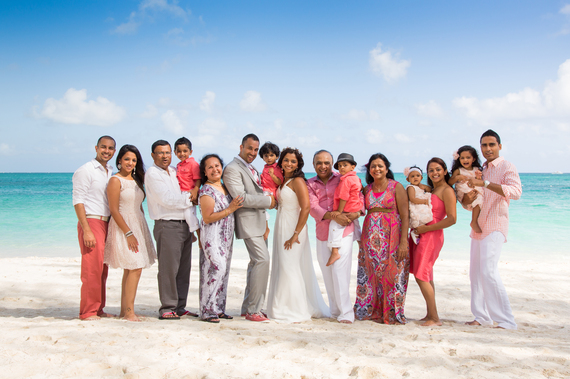 Ever wonder why it's completely normal for Indian guys to live at home with their parents well into their 20s and 30s? Or how even after marriage, they live with their parents and spouse as a "joint family?" And why for a non-Indian guy, it's more like "You still live with your parents?!" What is the power-struggle like? Who pays for what? What are the boundaries? Let us explain...

We are Sheena, Nina, and Dipti -- the founders and creators of the South Asian fashion and lifestyle blog, Runways and Rattles. After graduating college, each of us moved back home to live with our parents -- a decision we thought was totally normal given that we had seen our cousins and Indian friends do the same. It was only after fielding countless questions from our non-Indian friends that we realized that in the U.S. it's far from the norm. So, how does the whole "living at home with your parents" deal work in Indian culture? We breakdown down the dynamics of the Indian household and how it compares to non-Indian household as we see it:

a. Non-Indian: Growing up in America, it was normal to see our non-Indian friends graduate high school/college and move out of their parents' home, get their own place, work full time and start making their own living. It seemed to us that they were expected and encouraged to get accustomed to living on their own and being independent. A non-Indian man living with his parents in his adult life seemed out of the ordinary - especially when it came to the ladies. Telling a woman that the man she is interested in lives at home with his parents raised an eyebrow or two!

b. Indian: Typically, in the Indian culture, returning home after high school or college is not only encouraged, but expected. Even living in America, parents who have migrated here from India have instilled in their children the idea that living with their parents is how Indian "joint-families" work. Most children will stay with their parents up until marriage and some even after marriage and the Indian "society" accepts this as the norm. There is no taboo, there is no judgment, and there is no shame - from the male or female perspective. Children are meant to stay with their parents to be taken care of, and as the parents grow older, the children are expected to take care of their parents in their home.

2. Parents' Roles with their Children

a. Non-Indian: In the non-Indian household where a man chooses to live with his parents and spouse after marriage, we always got the impression that the choice to do so is more the man's decision and not the parents'. The roles in that house seem to remain neutral in that both parents and their children in this situation have an equal say in the house. The household creates invisible boundaries that dictated when each will get involved with the other's lives and let the child and his spouse make their own rules and customs, in the attempt to provide a balanced household.

b. Indian: Parents' roles in an Indian household tend to remain the same pre- and post- marriage. The parents run the household as they have been with limited input from their children. The children tend to put their respect for their parents above all and conform to this style of running the household. It can be very challenging at times, especially for the daughter-in-law since it's a slight battle of power. However, you will rarely see a daughter live at her parents' home after marriage with her husband as in the Indian culture doing so is quite taboo - they even have a term for it "ghar jamai" or house guest son-in-law.

3. Parents' Roles with their Grandkids

a. Non-Indian: The grandparents of the non-Indian household, while always being available to help, want their children to take the lead and be responsible for raising their own kids. The grandparents create a balance between their own careers/social lives and their grandkids. While they revel in the opportunity to spend time with and spoil their grandkids, they expect the new parents will do the hard work of raising them. On the one hand, it can create a sense of limited guidance for the new parents while on the other hand it gives the new parents autonomy in decision making, which perhaps comes from their own parents' desire to have their children be more independent. It also helps that the grandparents will usually do what their children desire when raising the grandkids in terms of rules, schedules and activities.

b. Indian: In the Indian joint-family household, the grandparents are very involved in raising the grandchildren. We are 3 sisters with 5 kids and one on the way! Our parents and in-laws spend a lot of time raising the grandkids and continue to have a major influence on how we raise our kids. Traditionally, the grandparents take it upon themselves to raise the grandchildren so that their children can go back to work without the stress of childcare. They are usually willing to put aside their personal careers/social commitments to help with their grandkids. Sometimes it may feel like too much involvement because the grandparents may not agree with the way that their children are raising the grandkids and the new parents may feel that they are not given the liberty to raise their children how they see fit. Grandparents will likely do things the way they see best, which again as young parents, we are taught to accept because hey, we turned out okay, right?!

a. Non-Indian: It was always weird for us to see our non-Indian friends' parents understand the concept of "boundaries." It never came as a surprise for their parents to speak openly with their children (and their significant others) about relationships, sex, drugs, etc. The parents are more aware of their adult children needing time alone, whether it's for hanging out with their friends or with their significant other. Once the children grow up and get married their privacy needs are automatically understood and accepted, without the need for a conversation about it. Showing affection is completely normal and doesn't create any sort of awkwardness (unless their Indian friends are present in which case their faces turn bright red of shyness)!

b. Indian: In the Indian household, privacy has boundaries. Parents expect their children and their spouse to find their own time for privacy that does not interfere with family time. Dinners are usually a family affair with all the household members sitting together at the table and sharing the day's happenings, bonding and spending time together. When it comes to affection, Indian families are very conservative. Intimacy (even hand holding or a peck on the lips) is considered inappropriate in front of elders. Until very recently intimacy was an extreme rarity even in Indian cinema (i.e. Bollywood) as these types of things - sex, relationships, drugs, etc. - are considered private matters.

a. Non-Indian: The non-Indian household appears to be more about equal distribution. Therefore, if the child is living with his parents after marriage with their spouse, they are most likely sharing the costs associated with living as a joint family (i.e. rent, utilities, etc.). They also contribute to household expenses such as groceries, supplies, repairs, etc. The parents find this to be a sign of independence and responsibility while their child is still living under their own roof. This arrangement may also lend itself to more money-related issues between the parents and children, thereby causing tension between the family members.

b. Indian: In the Indian household, the understanding is, "I take care of you now, and you will take care of me later." The parents will rarely expect any monetary contributions from the children as they believe it's their own "duty" to take care of their children. Therefore, in the Indian household, the parents will pay the mortgage and expenses needed to support their children, with the expectation that once the parents get older, they will live with their kids and be supported by them in health and finances -- regardless of the living situation. This mentality has also infiltrated the Indian household in America. Sure, at times it can cause money related problems if the child expects to be supported his/her whole life, but rarely do the parents let money become an issue in the household -- it's rarely even spoken about to be quite honest!

Brought to you by Sheena, Nina and Dipti - the founders and creators of the premier South Asian fashion and lifestyle blog, Runways and Rattles.

Youngest of 3 sisters, expecting mom, blogger, writer, believer that there is something more than the law in my future!