Observing the Federal Communications Commission is like watching a grinning politician in a giant hamster wheel going nowhere. Chairman Julius Genachowski just wasted an entire year trying to broker corporate compromises on policies that will shape our media and technology for generations. He has failed to make good on Obama's earnest promise to protect Net Neutrality - that prevents high speed Internet providers like Comcast and ATT from indiscriminately blocking or slowing Web traffic. He has failed to reassert FCC authority over those providers that was stripped by the Bush-era FCC. And he has failed to make any decisions that would restore America's role as a leader in fast, affordable Internet connections.

Every time Mr. Genachowski is faced with a moment that requires action to make good on his lofty promises and protect the American people, he dithers, calls for a new study, asks industry behemoths to solve policy issues for him, and keeps grinning and spinning: a style reminiscent of the regulatory failure that preceded the recent financial crisis and the Gulf oil spill. 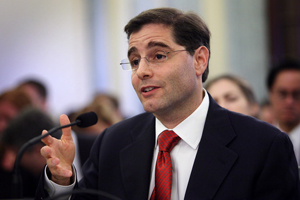 Disasters that could have been avoided if regulators had simply exercised meaningful oversight of the industries they were supposed to be monitoring. Those regulators dithered and capitulated, and our economy and our oceans are worse for it.

These failures share a common thread: a broader, ongoing government-wide failure to challenge the supremacy of industry lobbyists in Washington. The FCC Chairman clings to a myth that contaminates Washington: that he need never make tough choices that place the public interest squarely ahead of corporate interests; that consensus is always both possible and desirable; and that a policy that privileges the people's interest above corporate interests is by definition untenable, or even "radical." Yes, Washington has become that corrupted by special interest money, and yes our regulatory agencies are that corrupted by the industries they are supposed to police.

In the Chairman's world, a hostile letter from politicians tainted by phone and cable campaign contributions constitutes a legitimate reason not to act in the public interest. In the Chairman's world, the range of debate is dictated by corporate lobbyists and their friends with the financial resources to shape public opinion and exert political pressure. Pro-industry rhetoric from respected former politicians who feed at the corporate trough provide additional political cover. Industry-funded mercenaries with lovable names like "Americans for Prosperity" spew scintillating propaganda across television and radio outlets.

And the media are more interested in political bloodsport than substantive coverage of policy debates, or who pays the mercenaries' bills. Charges of "Marxist" and "socialist" rain down on public interest advocates and principled politicians, while wedge issues are wielded like grenades to manipulate honest folks against each other and for corporate-backed deregulation that continues the downward spiral of American politics. Indeed, in today's Washington, taking on corporate interests has become radical.

And it's about to get worse. Come November, you will hear a post-election chorus of media analysts declaring that the Democrats' agenda went too far. They'll say that the era of big government is over (again), and that the public has rejected calls for basic regulations or critical public programs. Those analysts will be wrong, deregulation will find new friends in government, and the largest companies will continue to run amuck while the American people foot the bill.

Recent congressional debates on Net Neutrality provide yet another example of industry capture of government. In the face of FCC inaction, Congressman Henry Waxman, one of the dwindling ranks of principled politicians, made a noble attempt to introduce legislation that would codify a few Internet protections that would prevent the largest Internet providers from creating fast and slow lanes on the Internet. But like may leaders in Congress, Waxman was forced to make huge compromises to gain industry support and GOP buy in.

Such policy compromises led some public interest groups - like the one I run - to part ways with supporters of the deal. And in the end, even the industry-supported bill was killed by House Republicans. The process revealed that even the most public interest minded legislators like Henry Waxman are forced to broker policy compromises that are a far cry from what the public needs and deserves. It shows how far big money, with an assist from big media, holds corrosive sway over our political process.

And most galling is that this entire legislative exercise was unnecessary. If the FCC would simply take its job of protecting consumers and the free and open Internet seriously, it could have successfully acted months ago. Instead, the hamster wheel continues to turn, the dithering continues, and the huge beneficiaries of such shocking inaction are? You guessed it: the big phone and cable companies who remain unregulated while the FCC shirks its responsibilities.

But protecting Net Neutrality is different. We cannot let it go the way of big banks and big oil, because it represents one of our best chances to reduce the influence of corporate interests in Washington, and replace propaganda with critical, accountable journalism, and web-based watchdogs.

Here's why: with low barriers to entry, an open Internet allows political campaigns to cheaply and effectively reach small donors, and over time, lessen their dependence on corporate money. That same open Internet creates a space for independent commentary and hard-hitting journalism, researched and written by journalists who aren't beholden to Washington mores, fierce profit pressures or the 24 hour news cycle. (How we pay for that kind of reporting - even if we've secured a distribution mechanism for it - is another issue I spend a lot of time thinking about.)

If the public can win this one battle, we will be in a better position to reshape Washington in our own images, and create a sustainable, accountable government that puts the public back in public policy.

So President Obama and Chairman Genachowski, hear this:

Ignore the lobbyists who would have you let them carve up the Internet.

Ignore the conventional wisdom of the chattering classes, who would have you believe that public policy is about appeasing Goliath while handing scraps to David.

Ask not whether government is too big or too small, but whether it works.

On Net Neutrality, government-that-works means ensuring that citizens, innovators, and creators -- not large corporations or the government - control the flow of information. It is the only way to ensure that the American people are the powerful actors that drive speech, democratic engagement, commerce, and culture.

Asserting that role can also be a first step toward setting aside childish things, seeing beyond narrow interests, and being leaders willing to make the hard choices that ensure that our government serves the American people.

It's the change we were promised and the change that we desperately need.